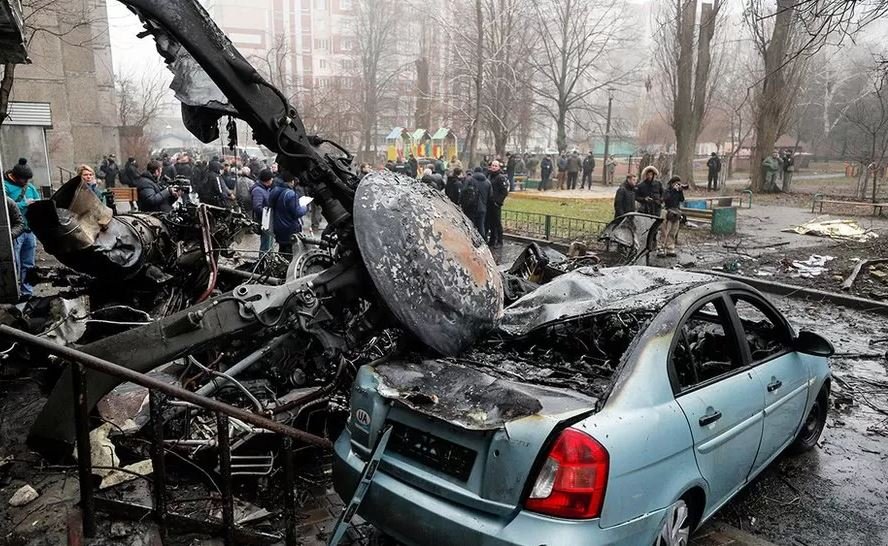 On Wednesday, a helicopter carrying 14 people, including the three top officials in Ukraine’s interior ministry, crashed in fog near a nursery outside of Kyiv, Ukraine.

Interior Minister Denys Monastyrsky has died alongside his first deputy minister and state secretary. The crash had a destructive effect since a massive fire was started by the crash, and it completely destroyed one side of the neighborhood nursery building.

You Can Also Read: Aircraft crashes in Nepal: Why are there so many?

The governor of the Kyiv region said that children and staff were in the nursery when the crash happened just after 8 a.m. (0600 GMT). Officials initially claimed there had been even more deaths, however Ukraine’s State Emergency Service later reported that there had been 14 deaths, including one child, and 25 injuries, including 11 children. After authorities finished their search and rescue efforts and identified the bodies, they provided the update.

A tragic loss for Ukraine

According to Ukrainian officials, the crash resulted in the deaths of five Interior Ministry officials, one national police official, and the whole crew of three helicopters.

Denys Monastyrsky, 42, the interior minister of Ukraine, was killed, along with Yevhen Yenin, his first deputy minister, and Yuriy Lubkovych, the state secretary. This was the second major tragedy to hit Ukraine in four days, after a Russian missile hit an apartment building in the city of Dnipro in the southeast, killing dozens of civilians.

Kyrylo Tymoshenko, the deputy head of the Ukrainian presidential office, remarked, “Haven’t had time to recover from one tragedy, there is already another one.”

Mr. Monastyrsky, one of President Volodymyr Zelensky’s longest-serving political advisers, was the most prominent from Ukrainian side since the beginning of the war. Since the interior ministry is responsible for managing the police and preserving security during the conflict, the minister’s death strikes to the heart of the Kyiv government.

When the minister’s chopper crashed, Kyrylo Tymoshenko claimed that he was his route to a war “hot zone”.  Volodymyr Tymoshko, the police chief in Kharkiv (a city in Ukraine’s north-east), stated that the ministerial team was traveling to meet him there and he had a recent conversation with them.

An accident or an attack or a war result?

The Super Puma helicopter, which France provided, appeared to be making its way amid dense fog to a frontline location. The helicopter crashed in a residential neighborhood containing apartment buildings, a commercial center, and vibrant playgrounds. A door panel and one of the helicopter’s rotors that landed on the roof of a car were all that remained of the vehicle. There were three bodies nearby that were wrapped in foil blankets.

Zelenskiy posted on the Telegram chat service that “Today, a terrible tragedy occurred in Brovary, Kyiv region. The pain is unspeakable.” President Zelensky, appearing via video-link at the World Economic Forum in Davos, requested a minute of silence for the victims of the helicopter crash, and subsequently added: “There are no accidents at war time. These are all war results absolutely.” The president of Ukraine also said that he was not worried about his own safety.

According to witnesses in Kiev, Russia’s war was to blame for the catastrophe. A local resident, Volodymyr Yermelenko said, “it was very foggy and there was no electricity, and when there is no electricity, there are no lights on the buildings.”

As per eyewitnesses, the pilot attempted to avoid high-rise buildings prior to the disaster, but crashed near the kindergarten. Few residents in the area reported of seeing a terrifying flash as the chopper buzzed above their homes.

There is no evidence that the collision was anything other than an accident. Officials from Ukraine have not claimed that the crash was the result of a Russian strike during the country’s ongoing conflict. It may take many weeks to investigate the disaster, said Air Force official, Yuriy Ihnat.

On Wednesday, the Ukrainian Security Service announced the beginning of an inquiry for the helicopter disaster, stating that it will look into three possible scenarios: (1) an aircraft failure; (2) a flight through poor visibility; and (3) deliberate targeting of the aircraft.

Ihor Klymenko, the head of the national police, was appointed acting interior minister by the cabinet without delay. Prime Minister Denys Shmyhal announced the appointment h ours after the death of Denys Monastyrskyi. The PM said, “Klymenko had officially been appointed to the role of deputy interior minister, but would fulfil the responsibilities of the minister.”

Yulia Tymoshenko said that the loss of the leaders of the Interior Ministry would not affect its work, but the government colleagues were visibly shocked with such disaster happening during a crucial time.