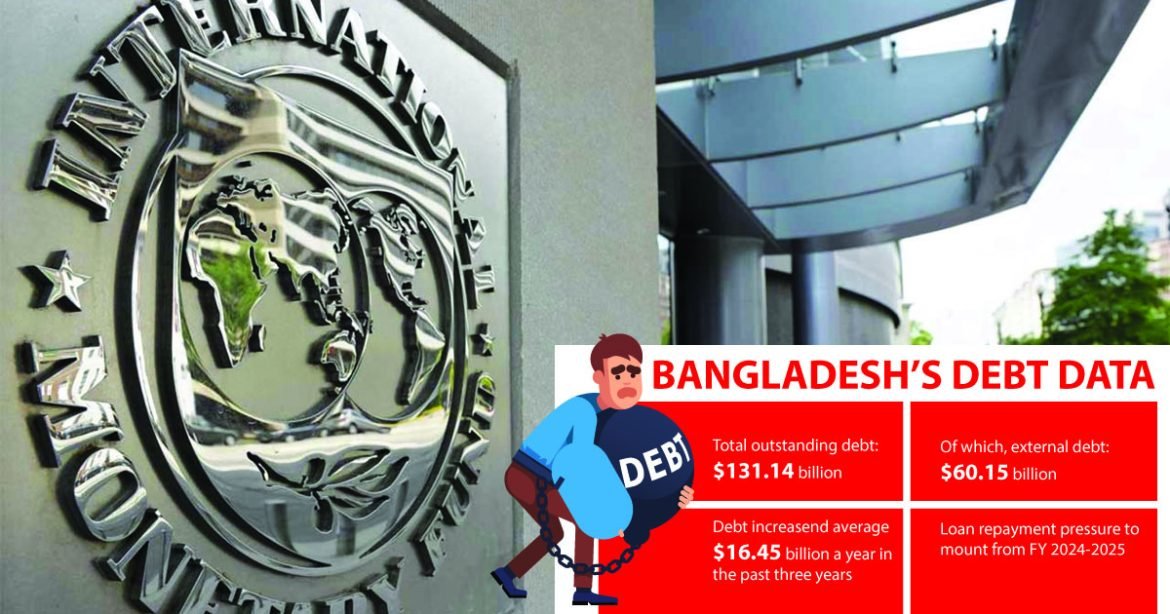 Nations pursue various development organizations and partners for borrowing to help continue their development activities. However, external debt may sometime prove augur ill as international organizations impose on countries various conditions for the loan. Considering the pros and cons of external debt, what a nation should do especially in the current financial crisis prevailing in many developing countries, writes DR. MOHAMMAD DULAL MIAH

ALSO, YOU CAN VISIT FOR: INTERNATIONAL INTERFERENCE IN BANGLADESH POLITICS: A GROWING THREAT?

South Asian countries are in a state of economic and financial disarray at varying degrees. It started with Sri Lanka, which, despite recent political regime change, is yet to find a sustainable way out of the on-going economic turmoil. The country is now at the doors of different international borrowers including International Monetary Fund (IMF) for a potential bailout. Myanmar, plagued by political crisis, is currently in the verge of economic collapse. Similar fate, if not worse, awaits Pakistan. Although the country has been able to bring a political change by ousting the former cricket legend and Prime Minister Imran Khan through a parliamentary no-confidence vote, Pakistan is approaching every day toward the brink of sovereign bankruptcy because of its failure to the debt in time. The country has already reached an agreement with the IMF for a $6 billion bailout package. Although Indian’s situation is not akin to that of other South Asian countries, at least at the surface level, the country has apparently failed in many vital areas, not to mention the ongoing communal violence. Dramatic depreciation of Indian Rupee recently has unveiled the shaky economic foundation of the country.

WHERE DOES BANGLADESH STAND?

Bangladesh has been considered a model for developing and emerging economies for its laudable endeavor to graduate from the low-income country to the lower middle-income country. At present, the country faces challenges from multiple fronts. Soaring inflation is a serious threat to the people who are living at the bottom of the population pyramid. Continuous current account deficit has led the currency of the country to an unprecedented level of depreciation against major foreign currencies. Job opportunities for the fresh graduates did not rise expectedly in the past. These recent adverse effects along with the negative consequences stemming from the worldwide Covid-19 pandemic have transformed millions to sink under the poverty line. Although the nominal GDP keeps rising, the overall living standard of the major chunk of population has deteriorated. To keep the economy moving and stabilizing the exchange rate, the government has already released billions of dollars from its reserve. Declining foreign exchange reserve indicates a looming economic crisis. Hence, the government has already initiated the process of negotiation with multiple development partners for loan. The notable among them is asking IMF for $4.5 billion loan. Upon the formal request from the Bangladesh government to IMF, a team of IMF delegates already visited Dhaka. To advance the discussion further another visit from the IMF delegation team is due soon. Reports say Bangladesh has also asked for fund assistance of $1 billion each from the World Bank and the ADB.

External debt portfolio of Bangladesh at present (at the end of fiscal 2020-21) amounts to $60.15 billion compared to $51.13 billion in the previous fiscal year, a rise of about 18 percent in just a year. Among them, an amount of about $25 billion is owed to the Asian Development Bank (ADB) and the World Bank (WB). The remaining amounts have been borrowed from bilateral partners including three major countries: India, China, and Russia. The loan from China amounts to $17.54 billion, Russia $11.38 billion, and India $7.36 billion. It is a positive sign that Bangladesh can recourse to various development organizations and partner countries for borrowing, thanks to the stable credit rating of the country. Three major credit rating agencies in the world (Fitch, Moody’s, and S&P) provided stable sovereign ratings (BB- by Fitch and S&P and Ba3 by Moody’s). However, there are some pros and cons of borrowing externally.

The primary benefit of borrowing externally underlies the very basic fact that the country receives a bulk chunk of foreign currency at a time which are available to meet the expenditures required for infrastructure and various development projects. For instance, the amounts bowered from Russia are primarily aimed at building Ruppur Nuclear Power Plant. Chinese loans are incurred mainly to construct the Bangabandhu Sheikh Mujibur Rahman Tunnel to be built beneath the Karnaphuli River. In general, fiscal revenues in most developing nations are not sufficient to provide required resources for such mega projects. Hence, external debt provides an opportunity for developing countries to undertake necessary infrastructure projects which play a critical role for the economic development. During the growing phase, countries require increased infrastructure including the uninterrupted supply of electricity, low-cost transportation and communication system, accessible ports, and other facilities. External debt enhances the capacity of developing nations to embark on those mega projects.

Well, it can be said that domestic resources can substitute foreign debt for building infrastructure. Construction of the Padma Bridge is a glaring example. While this statement remains valid, utilizing domestic resources for mega projects by government initiatives may crowd the private sector out. In other words, if government borrows from local financial markets frequently and heavily, the opportunity for private investment squeezes. Hence, an external flow of funds augurs well for developing nations.

Second, external debt helps stabilize local financial and foreign exchange markets to a certain extent. Foreign consultants are involved in mega projects from the beginning to the end. Several Chinese and Japanese companies were involved in Padma Bridge as consultants. A South Korean entity collects toll for Padma Bridge. These consultants are paid in foreign currency. In addition, majority of the materials, machineries, and equipment to be used in mega projects are either purchased or rented from abroad. This requires payment in foreign currency. Hence, loan in dollar and other hard currencies can be utilized to pay for materials and consultants.

External debt does not always bring positive results for the local economy. It may sometime prove augur ill. It can be said that debt itself is a curse in the conventional sense. Hence, engaging debt is equivalent to accepting a curse. However, this conventional wisdom does not fit to modern development theory. Developing countries can expand fiscal spending beyond their annual fiscal revenue. Given limited internal resources, if developing countries confine their fiscal spending only to the level of their internally available resources, economic growth is unlikely to take off. Instead, they can increase the spending for various development projects through deficit budget which can be supported by domestic and external borrowing. However, mounting external debt can turn into a poverty trap for many countries. For instance, current debt means increased future tax burden on domestic taxpayers. To pay the debt, government must increase tax burden on citizens in the future which tends to reduce real income of that generation without providing any public benefits in return. In addition, reduction of real income in the future would lead to a slicing of saving.

National capital formation would be in jeopardy, as a result. Shortage of private capital formation means the shrinkage of private investment. This, in turn, would hamper the creation of new employment opportunities. Hence, the government tends to look for new sources for further borrowing. This spiral effect leads to a low level of equilibrium trap. Stories of many underdeveloped countries echo this spiral effect between debt and poverty. Second, the lender imposes various conditions on the borrowers which may restrict the power of the latter to utilize the borrowed amount freely. Sri Lanka is a case in point. China lent Sri Lanka asubstantial amount of sum for development projects. One notable among them is the much-talked Hambantota port. The mistake from the Sri Lankan side was not to objectively measure the financial feasibility of the project. However, Chinese lender forced Sri Lanka to utilize Chinese resources including the consultancy service, machinery, and equipment throughout the project. It means that China, instead of providing money to Sri Lanka (in true sense), developed the port and imposed the mammoth debt burden on Sri Lanka. This is just one of myriad examples pointing out incongruous conditions that lenders can impose on borrowers. In the case of Bangladesh, loans from India and China are characterized by various conditions, which may not be conducive for the borrowing nation. Compared to the loan from the international development organizations such as IMF and WB, loans from India and China mature in a much shorter period. This translates into an increased amount of instalment to be paid at a regular interval. In addition, the grace period for bilateral loan is usually shorter. This brings another adverse consequence of external debt. For instance, the development projects for which the borrowed amount has been utilized, may not have started to payback when the instalments become due. This premature debt-servicing situation can force the borrowing nation to recourse to another debt. If this spiral continues, the benefits from external debt simply evaporate.

Borrowings, on the other hand, from international development organizations such as IMF and WB are not without trouble. We must keep in mind that ADB, IMF and WB are seriously influenced by major donor countries which are developed nations. Hence, the working philosophy of these international development organizations reflects to that of developed nations, i e., capitalism. When these international institutions provide loan to a country, they impose various conditions. Mainly they prescribe economic reforms which, though well-meaning sometimes, do not fit the socio-economic culture of the borrowing country. Hence, the effort to execute reforms prescribed by international organizations conflicts with the local conditions and the benefits of reforms simply disappear. History shows that development funds facilitated by donor agencies remained unutilized because the associated conditions couldn’t be satisfied. The current loan negotiation with the IMF has resurfaced some conditions. These include removing subsidies from energy, agriculture, leaving foreign exchange market completely liberalized, hiking interest rate based on demand and supply etc. Bangladesh follows a managed floating system in foreign currency market.

If foreign exchange is suddenly left to the market, it can destabilize the exchange rate. A sudden drop of local currency value further, would not only hike the import price and inflation, but also exacerbates the government capacity to pay loans in foreign currency in the future. Moreover, removing subsidy (the government has already hiked energy price substantially) from energy and agriculture would render an adverse effect on local citizens. No doubt, such a move adds an insult to an injury as people are fighting rampant inflation. Hence, the overall effect of external debt depends greatly on how astutely government can negotiate these conditions in favor of the general people of the country.

Dr. Mohammad Dulal Miah is an Associate Professor and Head of the Department of Economics and Finance at University of Nizwa, Oman. He has published several academic books (including one published from Cambridge University Press) and contributed numerous research articles to academic journals. Dr. Miah also writes regularly for various national and international newspaper and magazines.