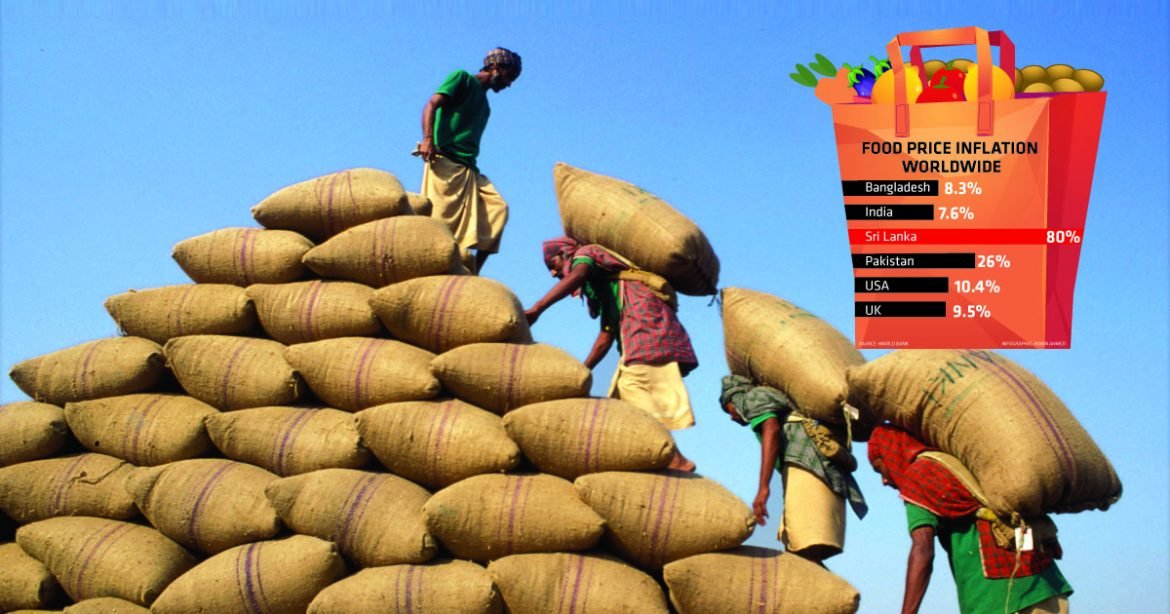 Food crisis is looming large in many countries across the world. Along with the increase in number of hungry people, there is also growing insecurity of necessary healthy food. At present, one in the world’s three people is a victim of this uncertainty. For two years, the effect of the Covid pandemic deteriorated global food supply, and the Russia-Ukraine war has become a ‘wound on the neck’ in the world’s food system. In this circumstance, food price inflation skyrocketed to a multiyear high in South Asian countries as in other parts of the globe, revealed the latest World Bank update. However, there is no major food shortage in Bangladesh – thanks to the government’s timely initiatives.

ALSO, YOU CAN VISIT FOR: INFLATED COMMODITY PRICE: POOR IN CRISIS, MIDDLE CLASS IN DISARRAY

WHAT DOES WORLD BANK REPORT REVEAL?

Published on August 11, the latest World Bank report titled ‘Food Security Update’ has revealed that there is no food shortage in Bangladesh even though there is food crisis in different countries of the world. According to the Washington-based organisation, various steps taken by the government to increase food production have placed the country in this advantageous position. The report said food price inflation reached 8.3 percent in Bangladesh, whereas it’s 7.6 percent in India, 26 percent in Pakistan, 80 percent in Sri Lanka, 10.4 percent in the United States, and 9.9 percent in the United Kingdom, among other countries. Now, let’s look into reasons behind the global massive food crisis and its aftermath; and how is Bangladesh coping up in this dire situation.

Food security is the assurance of food availability. In other words, food security is the guarantee of sufficient food stock and its availability according to the needs of a country’s general populace. The food security in many countries is already at risk as a result of the enduring Russia-Ukraine war. The global food supply system is in turmoil. Both Russia and Ukraine are two major suppliers of food grains to the world market. The two provide about one-third of the world’s wheat supply. Of this, Ukraine provides about 10 percent. Many countries import food grains from both the countries.

But as the conflict began, Russian Navy blockaded Ukraine’s Black Sea ports – halting its exports. In addition to this blockade, Western sanctions imposed on Russia are also responsible for the global food crisis. There is no sign of stopping this ongoing war as of now. The world has seen many things in last six months of the war including record oil and gas prices worldwide, overvaluation of the dollar and record devaluation of local currencies. Due to the shock of this war, the world economy is in chaos. On top of that, global food security risks have emerged as an extreme crisis. In the meantime, the World Bank has warned that the world commodity market is going to have the biggest shock in 50 years due to the war.

Meanwhile, the overall global economy has fallen into a deep recession not seen since the World War II. The Russian Federation is a major supplier of natural gas and fertilisers. It will also affect the agricultural production of countries that import fertilisers from Russia. Experts believe this will have a negative impact on global food grain production in the coming days. Denying the accusations of the Western countries, Russia says the whole world is suffering from food shortage due to the Western world’s embargo. Russian Foreign Minister said the West, not Russia, is responsible for the global food crisis. An embargo has been imposed on Russian trade to exert its influence on the region. The war is being deliberately prolonged. However, the Russia-Ukraine agreement on grain exports through the Black Sea is showing some hope following a landmark deal to reopen Black Sea ports for grain exports.

Although the impact of the global food crisis did not directly affect Bangladesh, the price of food products in the country has marked sharp rise. Economists said the recent hike in the prices of diesel and fertilisers, coupled with the impacts of climate change and the Russia-Ukraine war, may eventually risk food security in Bangladesh. Amid high prices of food items in the international market, hike in the fuel oil and fertiliser prices would also push up the production cost of rice and other crops in the country, they said. Agriculture Minister Dr Abdur Razzaque himself admitted to an uncertainty over the volume of Aman rice production this year as irrigation is being hampered amid high price of diesel and frequent power outages. Moreover, although it is commonly said that Bangladesh is self-sufficient in food, available statistics say otherwise. According to various statistics,Bangladesh is actually a country dependent on food imports. About 90 percent of the country’s demand for wheat is import-dependent. Also, Bangladesh is increasingly becoming dependent on imports for rice. In fact, Bangladesh has been one of the highest rice importing countries across the world over the course of past few years. More than 2.6 million tonnes of rice was imported in 2021 alone, which took Bangladesh to the second place in world on the list of rice importers. But in the current state of the global food situation, even if there is money it may be difficult for countries to get food grains. However, the World Bank report said although food inflation in South Asian countries has reached the highest level, no major food shortage was seen in Bangladesh until July 2022. The Bank has reasoned and praised various steps taken by the Bangladesh government in addressing food security.

COUNTER MEASURES AROUND THE GLOBE

The entire world is already suffering from food insecurity due to the current crisis and some countries stockpiling grain as a counter measure. To prevent the crisis, many countries have halted export of various daily necessities and food. Across the South Asian region, governments have adjusted agricultural policies to address food security concerns. Bangladesh’s neighbouring country India has barred exporting wheat and sugar. In Bhutan, the government is stocking essential food items directly and through concessional working capitals to wholesalers. Pakistan has been providing targeted subsidies and has amplified coverage of social protection programmes to shelter the poorest households from inflated food prices.

The government of Bangladesh has reduced rice import tariffs, increased the budgetary allocation to agriculture, increased fertiliser subsidies, and provided cash incentive to the exporters. These initiatives were mentioned and appreciated by the World Bank in its latest Update. Also, the government is taking several other steps to protect financially vulnerable population from high market price of food products. For this reason, initiative has been taken to increase the scope of open market sales (OMS) in selling rice and flour to 4.44 lakh families every day and also to ensure that 10 million families with family cards of Trading Corporation of Bangladesh (TCB) get 10 kilograms of rice at a lower price.

Bangladesh is closing in on the import of at least 8.3 lakh tonnes of food grains from various countries including India, Vietnam and Russia to ensure food security. Initiatives are being taken to import 1 lakh and 2.3 lakh tonnes of rice consecutively from India and Vietnam to increase the stock of rice. Additionally, wheat imports from Russia amounting 5 lakh tonnes is being finalised with paramount importance. In the current reality, Prime Minister Sheikh Hasina has issued several directives to the Ministry of Food to ensure food security to the country’s citizens. Already, a letter has been sent from the Cabinet Division to the National Board of Revenue (NBR) to completely withdraw the existing 25.75 percent import duty and tax to ensure sufficient import of rice to meet the country’s food demands. Besides, the government is planning to reduce the price of diesel, which is used in irrigation so that the production in the next Boro rice season is not disturbed due to increase in diesel price. It is learned that discussions are going on to this effect between the Agriculture Ministry, Energy Division and the Finance Ministry.

In fine, the Food Ministry is scheduled to start distribution of rice at a rate of Tk 15 per kg from September 1 under the OMS programme. About 50 lakh card-holder families will be able to buy 30 kg of rice per month under this programme. Besides, OMS coverage is being extended across the country. Currently, rice and flour are being sold in OMS through about 800 dealers across the country. The number of dealers has been planned to be increased to 2,013 next month. A total of 4.44 lakh people can buy rice and flour from OMS programme every day. Besides, the Food Ministry said although there is currently sufficient stock of rice, the government is planning to import more rice on G2G basis from India and Vietnam, in order to protect the poor from the effects of price inflation and to implement the initiative of expanding food-friendly programmes. Food Ministry will contact the Bangladesh Embassy in Vietnam to take necessary measures to this effect. In addition, the Ministry has sent letter to Cabinet Division highlighting the rationale for withdrawing all existing customs duties and tax on the import of rice to ensure that all of the 10.10 lakh tonnes of rice that has been approved for the private sector can be imported promptly. Experts think if the duty and tax can be withdrawn completely, rice imports will increase and food security will be ensured, which will also contribute towards keeping food security by way of reining in rice price.