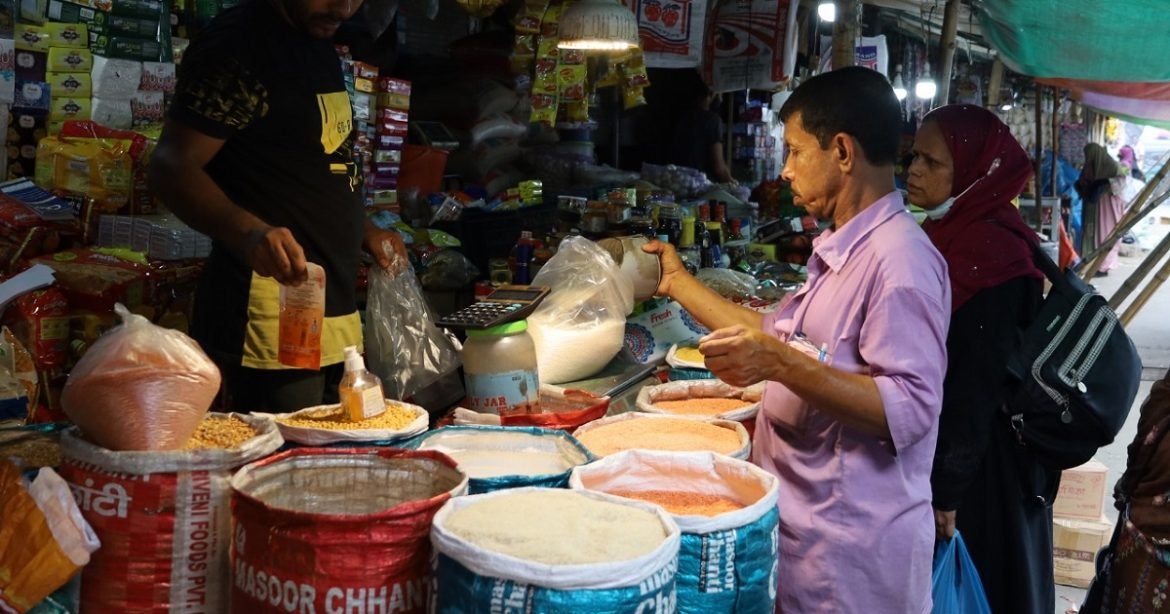 The prices of rice, pulses, fish, meat, oil, bakery products, fruits, sugar, salt, wheat, flour, bread, medicines, etc. have almost doubled in the span of a few days. Not only that, but price of eggs, which is the favourite food of lower middle class people hiked unprecedentedly. According to the government, a kg of coarse rice is now Tk 48. You have to spend up to Tk 50 to buy anything in the market.

Also you can read our another article about : Energy Crisis Conundrum: Can Bangladesh Move Towards a Sustainable Solution?

If we talk about the prices of daily products in the current market, then it can be seen that soybean oil Tk 190, palm oil Tk 150, domestic onion Tk 55, imported onion Tk 50, and broiler chicken are being sold at the rate of Tk 200 per kg. Eggs are being sold at Tk 15 per pc. As a result, there is no way that marginal and limited income people will buy a little meal. Common people are confused by this, especially marginal and working class people’s lives have become difficult.

The irony is, the income of poor and middle class did not go up comparing to the commodity price hike. So it can be said that the current condition of low income people is very deplorable. They are starving and half-starved. The increase in the prices of daily necessities in this country is like a thunderbolt for the poor people.

As a result of this, the poor are in crisis and the middle class is bewildered. They cannot find any way to meet the cost of living. Because there is no match between people’s income and expenditure. People will regain the comfort of life when they see their income matching their expenditure. Otherwise it will never be possible.

At present, tea workers are suffering from crisis in the country. The current number of tea gardens in the country is 167. Out of which, 92 tea gardens are located in Sylhet’s Moulvibazar district. And about one and a half lakh workers are involved in this tea industry. Their daily wage is Tk 120. That is, a monthly salary of 3600 taka. With this limited income, this money is nothing compared to the current market price of goods. As a result, it becomes difficult for them to support their families. With hard work they are producing record amount of tea every year.

In 2021, 96 million kg of tea was produced, which is the highest production record of Bangladesh. They are working for the development of tea industry but their fate has not changed. A movement is underway to change their fate. Yet only if their fortunes change will it be considered a worthwhile movement. Otherwise, this movement of tea workers can take a more intense form if it does not work. As a result, there will be danger of obstacles in the development of tea industry. So now is the time to develop the tea industry and time to give them value and an appreciation for their hard work, and also think about the demands of the workers and implement it.

A large part of our country is the student society. Two-thirds of whom come from remote areas to cities to pursue higher education. And in cities they have to live in a mess or a rented house. Although there are residential facilities in various government institutions but it is very less in number. As a result, they have no choice but to stay in mess or rented house. Most of them are children of lower middle class families.

As a result, they do tuition or any part-time job to manage their expenses. But, there expenditure is no match for this limited income. Because, at the present time the condition of the country’s market prices is extremely miserable for the life of bachelors. It can be said that they are gradually dying of starvation. There is a common saying in the society, egg and bean is the favourite food of bachelors; indeed it is.

But the rate at which the prices of eggs and pulses have risen at the present time makes it doubtful whether this food can fit into the lives of bachelors. Due to this the student society or the students are getting very worried about continuing their studies. If this continues, it will be difficult for them to survive in this expensive city.

Some unscrupulous traders in Bangladesh are also responsible for the increase in the prices of daily commodities. Many people increase the price of goods in the hope of extra profit. There are some traders who create artificial crisis by hoarding goods. As a result, the price of goods suddenly increases. These greedy and hoarding business syndicates are responsible for the rise in the prices of daily essentials at present.

Corruption exists in many sectors in Bangladesh. Corruption, bribery, extortion also increase the cost of production of goods. This is also one of the reasons for the increase in the prices of daily commodities. But it is very unfortunate that those involved in these syndicates are not punished. As a result, they does not hesitate to engage in the same activity again. Many times it is seen that the products of our country are smuggled to other countries. As a result, we have to buy those things at a higher price. The volatile environment in Bangladesh as well as various epidemics such as the recent Russia-Ukraine war have also increased commodity prices.

In order to reduce the price of daily necessities, the government must take strict measures and increase the stocks of all the daily commodities which depend on imports under monitoring. Strict measures should be taken against hoarders through regular market monitoring. Also, dishonest traders and syndicates should be brought under punishment through mobile-courts. So that seeing their punishment, everyone else would not dare to do such a despicable act.

The point is, people are struggling to buy daily necessities. Maybe some of us can afford it. But what about those who can’t afford it? Where will their situation stand? No matter how much we say that the country is developing, but is the condition of countrymen actually developing?

A developed country cannot be developed only by improving the transportation system or related issues. Rather establishing what is necessary for the survival of the common man. A country can be considered developed only if it can ensure that it is able to implement them. Otherwise, no matter how much we say that the country is developing, the country is not actually developed for its people. So the government have to ensure everything the people need to survive.