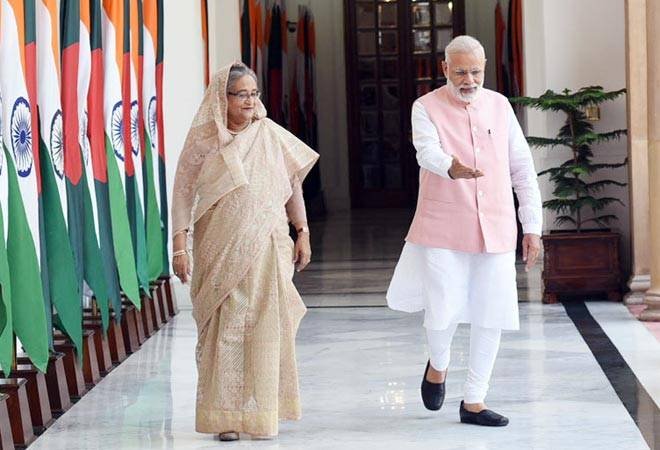 Prime Minister Sheikh Hasina is flying to India tomorrow (September 5) on a four-day formal visit with the summit meeting of the Prime Ministers of two neighbouring countries scheduled on September 6.

Diplomatic sources said preparations are underway to sign five to seven Memorandums of Understandings (MoUs) between the two next-door neighbours. Two of these deals will be renewed, revealed a leading daily in Bangladesh.

As per the itinerary, PM Hasina will reach Delhi early on Monday. Then in the afternoon, Indian External Affairs Minister S Jaishankar will pay a courtesy call on her at the hotel. She will be given a Guard of Honour at Rashtrapati Bhavan in India on Tuesday morning. After that, the Prime Minister will visit Rajghat to pay her respects to Mahatma Gandhi. From there, she will go to Hyderabad House in Delhi. Indian Prime Minister Narendra Modi and Bangladesh Prime Minister will meet there privately at delegation level.

The Prime Minister will hand over Mujib Scholarship, an initiative of the Bangladesh government, for the descendants of 200 Indian Armed Forces personnel, who were martyred and critically injured during Bangladesh’s Liberation War in 1971. She will visit Ajmir Sharif in Rajasthan on September 8. After visiting the shrine there, she will leave for Dhaka in the afternoon. PM Sheikh Hasina is paying this state visit to India after an interval of three years as she last visited India in 2019 before the Covid-19 pandemic broke out.