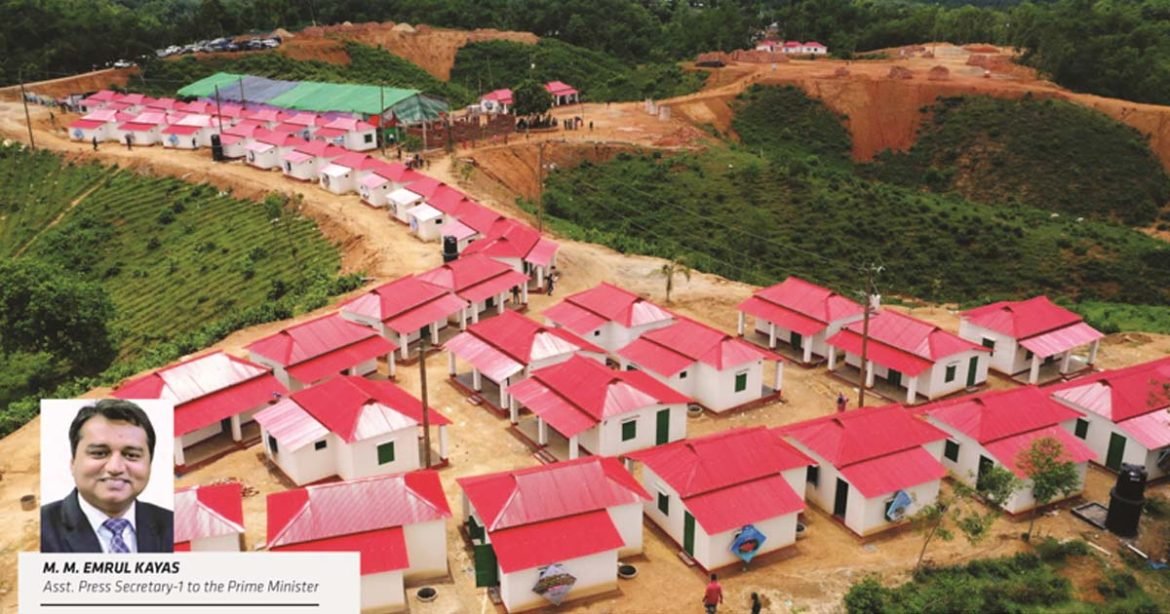 Through tireless efforts in her three consecutive terms serving the people as Prime Minister, she has been able to lower this number to 20% over the course of the last 13 and a half years. However, the poverty rate has to be further decreased for Bangladesh to become a developed country. Disadvantaged, poor, and marginalized populations of the
the country needs to be integrated into the mainstream of development.

Through the Ashrayan Project, The Honourable Prime Minister is integrating underprivileged, landless, and homeless
people into inclusive development. “Not a single person will be homeless in Bangladesh,” she has already declared.
The landless and homeless individuals in 64 districts around the country were listed to carry out this instruction from
the prime minister. Under the supervision of the Upazila Task Force Committee, addition or deduction to the list is an
ongoing process.

A list of 2 lakh 39 thousand 611 families, who are entirely landless and homeless, have been enlisted in ‘Category-A’. In addition, another 5 lakh 92 thousand 261 families, who own land but no home or homes in very poor condition, have been enlisted in ‘Category-B’. On the occasion of Mujib Borsho (Centenary birthday celebration of Bangabandhu Sheikh Mujibur Rahman), 1 lakh 85 thousand 129 homes have been handed over to landless and homeless families. Since 1997, more than 3.5 million people have been rehabilitated under this project.

On 20 February 1972, Father of the Nation Bangabandhu Sheikh Mujibur Rahman visited to Char Poragacha village in Ramgati Upazila of Laxmipur district (then under Noakhali district) and rehabilitated the landless, homeless, and helpless families affected by river erosion in cluster villages. On 19 May 1997, a severe cyclone struck Cox’s Bazar and other coastal districts. On 20 May, the Honourable Prime Minister Sheikh Hasina traveled to Saint Martin of Teknaf Upazila and directed for the rehabilitation of the cyclone-affected impoverished households who became homeless. The ‘Ashrayan’ project was introduced by the Honourable Prime Minister that year for the landless and homeless citizens.

Ashrayan refers to a greater and broader concept than merely residential accommodations. Beneficiaries received 2 decimals (shotok) of land as well as a semi-furnished, two-room house with free power connection along with a kitchen, bathroom, and shower. The house and the land are jointly registered in the names of both the husband and wife of the family. In the project area, several trees are being planted. For every ten families, there is one tube well for drinking water. As a result, the recipients will be protected from water-borne diseases including diarrhea. For their medical needs, community clinics are being constructed. Primary schools have been built to ensure primary education for the children. The project area also includes a playground for kids’ and teenagers’ physical activities and recreation. All the necessary civic amenities of a self-sufficient modern village are present in the Ashrayan Project.

The beneficiaries receive ten days of training in a variety of professions to improve their capacity and effectiveness as a workforce. Beneficiaries residing in the barracks are specifically receiving training in 32 trades, such as fish farming, carpet weaving, nursery work, embroidery, welding, and rickshaw-cycle-van repair. They receive a daily payment of 750 Taka during this training so that their income is not affected.

The beneficiaries can receive loans of up to 30 thousand Taka after completing the training for the creation of cooperative societies and starting entrepreneurship or a profession to increase income. Families, who have been placed in the barracks, will initially get three months of food assistance under the VGF initiative. They get priority for stipends under maternity, old age, widow, or other social security schemes. Therefore, a destitute person is being established as a self-confident human resource through various processes under this project.

Amartya Sen, an economist and Nobel laureate, says about poverty, “Hunger and poverty exist in the society due to the inability of the population to access or establish rights to food and other social benefits, i.e. failure of entitlement or failure of proprietorship.” Prime Minister Sheikh Hasina has created access for the poor beggars, widows, women abandoned by their husbands, landless, homeless, and dispossessed people to get land and other social benefits through the ‘Ashrayan’ project with the aim of equitable distribution of wealth. This initiative also includes people displaced by natural disasters, ethnic groups, third-gender people, Dalits, Harijans, and other socially underprivileged communities. This is the first and biggest project in the world to offer free homes for the state’s underprivileged populations to integrate them into the mainstream of society.

To comply with Article 15 of Bangladesh’s Constitution, access to basic amenities for all citizens is being carried out through the implementation of the Ashrayan Project. This also implements Article 3.13 of the Bangladesh Awami League’s 2018 Election Manifesto which includes eradicating poverty, minimizing inequality, and guaranteeing everyone’s right to a place to live. The promise made by the Honourable Prime Minister to resettle environmental and climate refugees is also being fulfilled. With the implementation of the Ashrayan Project, the following targets of Sustainable Development Goals (SDGs) are being successfully achieved

Different approaches to reduce hunger and poverty have been introduced at various times. A poor individual had fallen into extreme poverty by getting exploited under the guise of foreign help, food aid, relief, and microcredit. Professor of Political Economy at Harvard University in the United States, Dani Rodrik, has demonstrated through his research that redistribution of land ownership is an important condition for achieving high growth in East Asia. By acquiring homes and land and taking part in income-generating activities, the beneficiaries of the Asharyan Project can become self-sufficient

Now a chance has been created for them to contribute their skills and labour to the socio-economic growth of the nation. The beneficial people and families are getting over social depression with a dream of decent life and work. Jononetri Sheikh Hasina has brought the marginalized population into an inclusive development through this project. The Ashrayan project is contributing a significant role to the fight against poverty in Bangladesh. This innovative approach to inclusive development and poverty eradication has already known as the ‘Sheikh Hasina Model’. The six basic characteristics of the Sheikh Hasina Model are:

Bangabandhu Sheikh Mujib’s foremost political philosophy was to provide joy to the suffering people. The eldest daughter of the Father of the Nation is working nonstop to achieve that objective. She has taken every development strategy on the guiding principle, “No one will be left behind”. Bangladesh has already achieved United Nation’s final recommendation to become a developing country. We are progressively achieving Bangabandhu’s lifelong dream of a poverty-hunger-free ‘Golden Bangladesh’. We all hope that under the capable and visionary leadership of Honourable Prime Minister Sheikh Hasina, Bangladesh will achieve the target of becoming a developedprosperous country by 2041