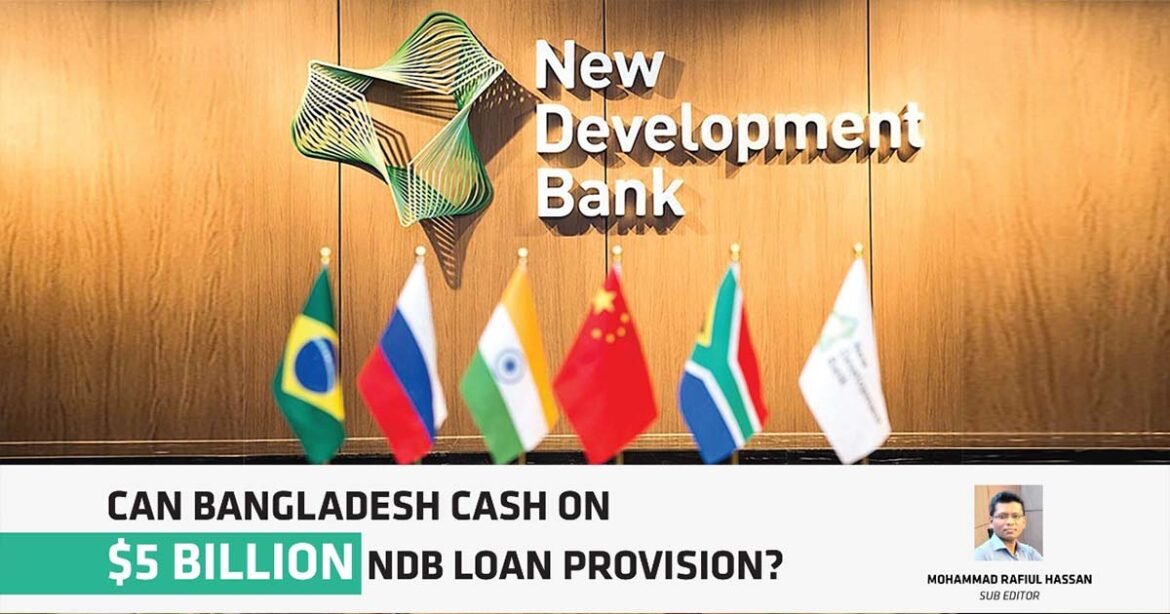 As Bangladesh became the first country to join the BRICS-led New Development Bank (NDB) in September 2021 just after the founding members, the country was followed soon by the UAE, Uruguay, and Egypt as new members. All these three countries joined the new multilateral development institution in December 2021. “The new members,” according to NDB President Marcos Troyjo, “will have a platform to foster their cooperation in infrastructure and sustainable development.” Although the members of BRICS (Brazil, Russia, India, China, and South Africa) founded the NDB initially for their own good, they later decided to expand the horizon, which paved the way for inclusion of Bangladesh and other countries.

As the 2012 BRICS Summit hosts, India originally proposed formation of the bank aimed at mobilising resources for infrastructure and sustainable development projects in its member states. Later, NDB was officially launched in December 2015 in Shanghai with an authorized capital of $100 billion. Besides, Article 2 of its policy state that the Bank would be open for membership by member-states of the United Nations. Economists think Bangladesh through joining NDB is, in fact, opening new horizons, and potentially important new financing channels for the country’s ever-growing list of development projects. In one such case of development, Bangladesh has the potential to avail NDB funds upto $5 billion from the new lender’s $30 billion portfolio for the 2022-26 period.

HOW WILL THE MEMBERSHIP BENEFIT BANGLADESH?

Bangladesh crossed the thresholds for the World Bank’s definition of lower middle-income country in 2015. The country has achieved impressive development results in the recent decades, and gains in poverty reduction and improvements in social indicators, but there are still significant pockets of poverty. As the fastest growing economy in South Asia, Bangladesh is putting considerable resources into developing its infrastructure, energy power, and communication networks, even while maintaining steady monetary policy and macroeconomic stability. Nevertheless, similar to other countries in the South Asian region, Bangladesh has enormous gaps in physical infrastructure. Bangladesh faces two main infrastructural development challenges. The first is its geography, and the second is limited financial resources. Much of its territory is frequently flooded during the monsoon season. It is therefore extremely difficult and expensive to build modern transportation and communication networks across the country. Yet, it is essential to support national development.

Md. Shamsuddoha at the Centre for Participatory Research and Development writes that, Bangladesh, as one of the most climate-vulnerable countries, requires substantial investments in climate-resilient infrastructure development. But Bangladesh does not have adequate financial resources, on its own, to fund its infrastructure goals, particularly at the rate that is needed.

To fulfil its aspirations, Bangladesh requires much more capital investment in energy, infrastructure and communication networks. So, experts referred to the country’s joining the NDB as an important achievement that will open a new avenue for foreign financing for the country and that it will play a supportive role in achieving the country’s development.

In this regard, Finance Minister AHM Mustafa Kamal said that Bangladesh’s membership in the Bank paves the way for a new partnership at a momentous time for the nation and is an important step forward in meeting the development vision of the Prime Minister Sheikh Hasina. Minister Mustafa Kamal emphasized that although the Bangladesh economy has been developing at a tremendous pace during the last decade, the country still needs a substantial amount of external financing to help sustain the national development initiatives. Hence, the government is looking to external partnerships to share best practices, skills, expertise, and cash.

According to Minister Mustafa Kamal, membership in the NDB will give us a significant channel for that external development financing. Economists and experts also said the Brics bank would be a new funding source alongside the World Bank, Asian Development Bank and Asian Infrastructure Investment Bank. Bangladesh officials are aware that the NDB, since its inception in late 2015, has provided about $30 billion in loans to member states for 70 different projects related to sustainable infrastructure and sustainable development more broadly. The NDB has also made a number of recent loans to support its members in responding to the COVID-19 pandemic.

There are some interesting regional and geopolitical matter to the story of how and when Bangladesh joined the NDB. One of the dimensions is India’s support for Bangladesh to join the NDB is a key element of the story. The point here is that Indian Prime Minister Narendra Modi invited Bangladesh to join the Bank at a virtual summit in December 2019, which Bangladesh Prime Minister Sheikh Hasina responded positively, and thereby set the country on the path to joining the Bank. On 2 September 2021, the NDB announced it had initiated the membership expansion. According to the NDB president, Bangladesh was the first to deposit its instrument of accession, and so officially, Bangladesh is now a full member of the institution.

According to Bangladesh news sources, the country’s total share in the Bank is US$942 million, in which US$188.4 million is paidin capital, while the rest US$753 million is authorized capital. The paid-in US$188.4 million will be deposited in seven instalments over seven years, and that subsequently, the country will be able to cover the remaining $753 million through the purchase of bonds of the NDB if it so desires. The seven-year period to pay the instalments and covering the remaining authorized capital through NDB bonds purchases, are procedural norms that apply to all of the NDB members and were established by the founding BRICS members. Before starting the $188.4 million payment to the NDB, the government had to pass a law to this effect and complete other related domestic processes. With the start of the deposits of the instruments of accession, i.e. payments, Bangladesh joined the board meetings of the NDB, and became eligible for loans.

IS BANGLADESH READY FOR LOANS?

Bangladesh’s joining the NDB in 2021 raised hopes that the new avenue would help the country meet the growing need for foreign financing. After one year, it now appears that the membership is left largely idle due to the slackness in preparing project proposals so far. Since Bangladesh became a member of the Bank, the Economic Relations Division (ERD) sent multiple letters to 19 ministries asking for preliminary development project proposals to secure the NDB loan.

The letters told the ministries that each development project will be provided with around $300 million in funding. But the ERD is yet to receive loan proposals for major infrastructural works except a $245 million water supply project in Dhaka. ERD officials said, a delay in sending the preliminary proposal will eventually decrease the country’s chances of getting the loans in the next five years. Therefore, the slow progress limits Bangladesh’s potentials to avail funds ranging from $3 billion to $5 billion from the new development lender’s $30 billion portfolio for the 2022-26 period.

Before making the membership payment of $188.4 million to the NDB, the government will have to pass a law to this effect. The authorities are also yet to finalize a law for the NDB financing, which will enable Brics bank-funded projects to avail some tax waivers. The draft of the law is now awaiting the Cabinet Division approval. After that, the country will be able to join the next board meeting of the bank, and from then on, Bangladesh will start getting loans.

WHAT THE BANGLADESH LOAN SCHEME MEANS FOR NDB?

Bangladesh, one of the top-ten fastest growing economies in the world has become a particularly attractive borrower for Multilateral Development Banks (MDB). For the NDB, Bangladesh has the potential to be a major borrower from the Bank, considering its relative large population, high growth rate, and major infrastructure and development needs. In a Chinese media interview, NDB president Marcos Troyjo said that “Bangladesh is the fastest growing country in the fastest growing region in the world, which is Asia. It is (Bangladesh) one of the top thirty economies of the world, in terms of the gross domestic product measured in purchasing power parity terms, it has done a lot in terms of poverty alleviation, it has done a lot in terms of raising living standards, life expectancy at birth, it’s got huge infrastructure needs. So, I think a major important addition to the New Development Bank.”

Bangladesh has received a large number of development loans from the World Bank, Islamic Development Bank (IsDB), and the Asian Development Bank (ADB) over the last four decades. The World Bank has provided more than US$35 billion in support to Bangladesh since its independence. The IsDB has lent more than US$23 billion since 1974. The ADB has provided a total of US$28.57 billion of loans, grants, and technical assistance to Bangladesh since 1973. The ongoing investment by the World Bank, IsDB, and ADB shows that Bangladesh has a long-established track-record of borrowing from the Multilateral Development Banks (MDB). However, it is also fair to point out that despite the increasing financing for infrastructure from the established MDBs, Bangladesh still has a lot of unmet infrastructure investment needs beyond its Megaprojects plan. From the perspective of the NDB, what can be interpreted is that Bangladesh has major infrastructure financing needs over the short-, medium- and longerterm, and that Dhaka is willing to borrow in large amounts for national infrastructure development from external multilateral lenders. Thus Bangladesh membership in the NDB will similarly pave the way for a new partnership in infrastructure investment and it will also benefit the NDB.

As for concluding note, NDB is known to have been established by BRICS nations to mobilise resources for infrastructure and sustainable development projects in member countries and other emerging economies and developing countries. Nearly seven years after its establishment, the NDB has made a sound start towards meeting the high expectations of its founders and other members. It is, however, expected that Bangladesh as a member of NDB can immensely be benefited by way of accelerating its infrastructural development utilising the bank’s ready-to-use funding. Economists, therefore, believe that the addition of Bangladesh has indeed broadened the base of borrowers and members for the new Bank, which aspires to become the premier multilateral development institution for the emerging economies.

PAKISTAN ARMY MAKER FOR GOOD OR BREAKER FOR BAD?

THE EBB AND FLOW OF HUMAN MIGRATION