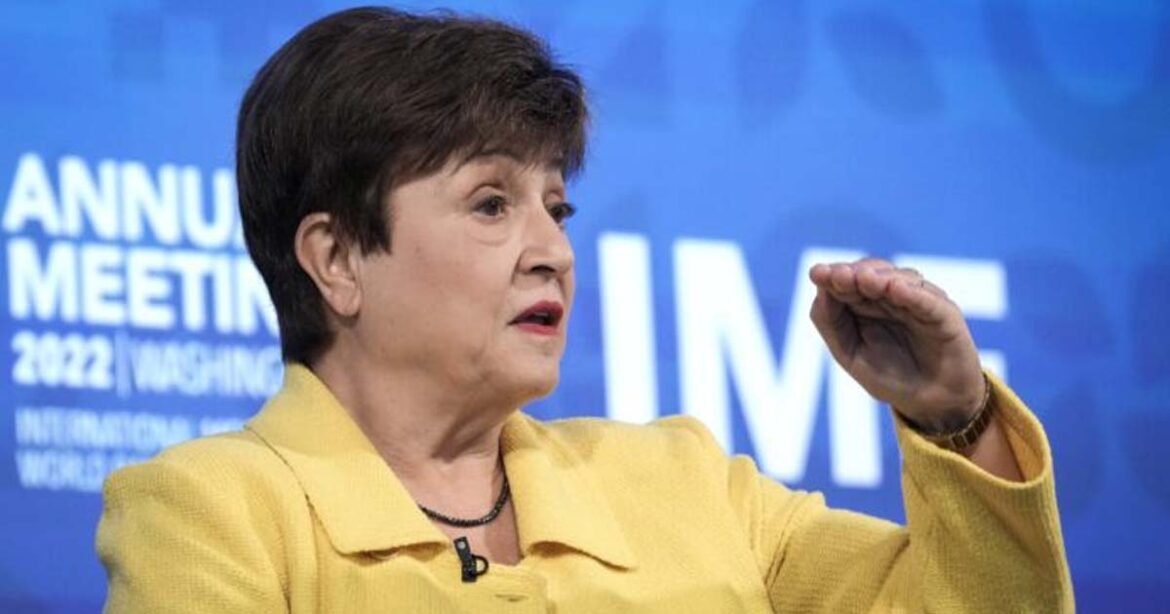 The head of the International Monetary Fund (IMF) has warned that 2023 will be a challenging year for most of the global economy as the major sources of global development (the United States, Europe, and China) will witness a declining performance.

IMF managing director Kristalina Georgieva predicted that 2023 would be “tougher than the year we leave behind” on American news channel CBS program named Face the Nation. “Why? Because the three big economies – the US, EU, and China – are all slowing down simultaneously,” she stated. “We expect one-third of the world economy to be in recession. Even countries that are not in recession, it would feel like a recession for hundreds of millions of people,” she added.

YOU CAN ALSO READ: FOREIGN ENVOYS’ COMMENTS ON INTERNAL AFFAIRS A VIOLATION OF VIENNA PROTOCOL?

It comes at a time when the conflict in Ukraine has been going on for more than 10 months and shows no signs of ending. At the same time, inflation is rising, interest rates are rising, and the Omicron variant is fueling a rise in coronavirus infections in China.

The IMF is a global organization with 190 member nations. They collaborate in an attempt to stabilize the world economy. One of its primary roles is to operate as an early economic warning system.

The IMF revised its projection for 2023 global economic growth in October. Since the Ukraine conflict, central banks throughout the world have increased interest rates in an effort to slow the rate of inflation. The IMF forecasts that global GDP would decelerate to 2.7% in 2023 from 3.2% in 2022. According to the report, “This is the weakest growth profile since 2001 except for the global financial crisis and the acute phase of the COVID-19 pandemic.”

Will China face a weakened economy in 2023?

China’s downturn will have a severe impact on the world economy. The second-largest economy in the world got much worse in 2022 because of China’s strict zero-Covid policy. This made China disconnected from the rest of the world, which ruined it’s supply chains and the flow of trade and investment.

However, in response to a surge of anti-government protests in the nation, China dropped its “zero Covid” policy and globalized its economy. This weekend, Chinese leader Xi Jinping said that he assumed China’s economy grew by at least 4.4% last year. This figure was a much better number than many economists had predicted, but it was still a lot lower than the 8.4% growth rate seen in 2021.

Figures released over the weekend showed that the Chinese economy was weak at the end of 2022. As coronavirus infections spread in China’s factories, the official purchasing managers’ index (PMI) for December showed that factory activity fell for the third month in a row and at the fastest rate in almost three years. China Index Academy, one of the largest independent property research firms in China, did a survey in the same month and found that home prices in 100 cities fell for the sixth month in a row.

US economy is comparatively stable

According to Georgievae, the US economy is reversing the trend and may prevent the severe recession that would likely affect at least a third of the world’s economies. “The United States is the most resilient,” she remarked. “It may avoid recession.  We see the labor market remaining quite strong,” she added.

Nonetheless, this reality poses a risk since it may impede the Fed’s efforts to return U.S. inflation to its target level after it reached its highest levels in four decades last year. A number of indicators suggested that inflation had peaked by the end of 2022, but the Fed’s chosen metric shows that prices are still roughly three times the 2% goal.

“This is … a mixed blessing because if the labor market is very strong, the Fed may have to keep interest rates tighter for longer to bring inflation down,” Georgieva stated.

In March of last year, the Fed raised its benchmark policy rate from near zero to a range of 4.25% to 4.50%. This was the most aggressive policy tightening since the early 1980s, and Fed officials said last month that it will hit 5% in 2023, a level not seen since 2007.

Federal Reserve policymakers will focus on the US job market to reduce price pressures. The first week of the new year offers a lot of employment statistics, including Friday’s monthly nonfarm payroll report. It is expected to indicate that the US economy added 200,000 jobs in December and the jobless rate remained at 3.7%, near the lowest since the 1960s.

Lastly, the views made by IMF would be concerning to people all across the world, especially in Asia, which already passed a challenging year in 2022. The conflict in Ukraine has been a major contributor to the region’s rising inflation, which has impacted families and businesses due to the associated rise in interest rates.