THE EBB AND FLOW OF HUMAN MIGRATION 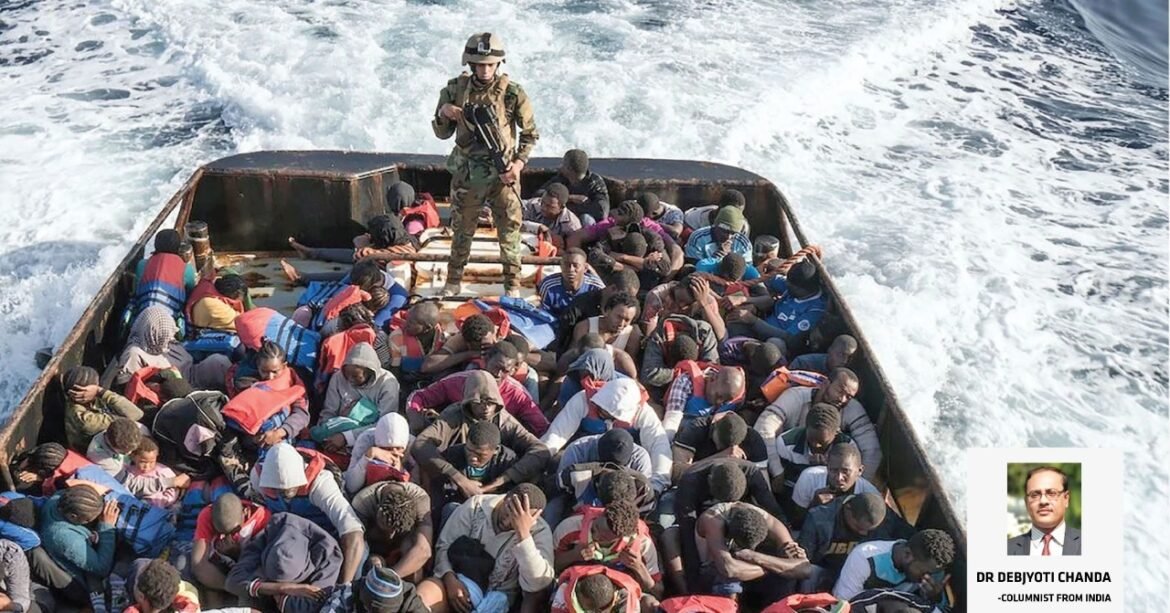 Many countries around the world have a fertile history of immigration, and their economy, social fabric have been largely influenced by the flow of immigrants from far away countries. South Asian countries – Bangladesh, India and Pakistan – have been the origin of millions of immigrants to the USA, Canada, Western Europe, Middle East, Indonesia, Malaysia, New Zealand and Australia, writes DR DEBJYOTI CHANDA

YOU CAN ALSO READ: CAN BANGLADESH CASH ON $5 BILLION NDB LOAN PROVISION?

A sense of pride permeates and overwhelms our senses when we learn that our kith and kin are holding preeminent positions in far off lands scattered around the globe. The French football team, which played against Argentina and became runners up in the Qatar World Cup final, consisted of players whose origin are of diverse countries of Africa and Far East, including Guyana, Guinea Bisou, Mali, Democratic Republic Of Congo, Benin, Cameroon, Angola, Ivory Coast, Morocco, Argentina and the Philippines. It is a testimony of the French way of colonisation and liberal immigration policy in the post colonisation period, as opposed to the Anglo Dutch ways, thus enabling them to build a thriving community of migrants in France. And the result is for everyone to see.

But the picture is not as rosy everywhere.US media has reported for the first time in US history, more than 2 million illegal border crossings took place in one year at the southern border. Seven Bangladeshis perished last January due to severe hypothermia on their way from Libya to the Mediterranean island of Lampedusa, bordering the southern coast of Italy, expecting immigration. Norway’s Foreign Ministry on November 19 announced that its country would take twenty migrants of the 234 rescued by Ocean Viking, a chartered ship belonging to a French NGO, off the coast of Libya and then wait for weeks to find a port that would allow them to disembark.

The 18th of December is observed all over the world as the International Day of Migrants. To understand and appreciate the cause and effect of these contrasting developments mentioned earlier, it is important to know the difference between the status of migration, immigration and refugees. Those people who in search of employment and higher standard of living move to another country through a legal and established procedure which is internationally accepted, are referred to as immigrants. Whereas immigration bears a feature of permanency where an immigrant is often granted resident permit and citizenship, in the long run, migration may be a temporary happening where people may be seen to move within or beyond the borders of a country due to some exigency, manmade or natural.

Migration is an expression of the human aspiration for dignity, safety and a better future. United Nations statistics disclose that there are a whopping 281 million migrants in the world today. Migration today is a global phenomenon brought about by the increasing need of globalisation and an aspiration for a better life in terms of social, emotional and economic factors. On the other hand, refugees are people who are forced to flee their homeland under compelling conditions — catastrophic situations caused by war or a natural calamity and take shelter in a foreign land.

The reports of the Sri Lankan Navy rescuing over 104 Rohingya refugees adrift off the Indian Ocean island nation’s northern coast while attempting to reach Southeast Asian countries of Malaysia and Indonesia in rickety vessels have just poured in. These numbers are surging due to the deteriorating conditions in the camps in Bangladesh and the military coup that occurred in Myanmar the previous year.

There are currently eleven lakh Rohingya refugees in Bangladesh. Kutupalong camp in Cox’s Bazar, Chittagong district of Bangladesh houses the largest refugee camp in the world, currently accommodating 6,20,000 Rohingyas. An estimated 12 million Syrian refugees have been displaced during the ongoing conflict in that country, and they have mostly taken shelter in neighbouring Jordan, Lebanon, Turkey and Iraq. Some have been lucky to get shelter in the EU and the US. As per current estimates, nearly 8.1 million refugees fleeing Ukraine have been recorded across Europe, while an estimated 8.5 million people have been displaced within the country by last September.

Many countries around the world have a fertile history of immigration, and their economy, social fabric have been largely influenced by the flow of immigrants from far away countries. South Asian countries, India, Bangladesh and Pakistan have been the origin of millions of immigrants to the Middle East, Western Europe, the USA, Canada, Indonesia, Malaysia, New Zealand and Australia.

The immigrants are often a source of invaluable remittances which descend back to their respective home countries, which help them maintain a healthy balance of foreign exchange reserves in the form of US dollar, which enable them to pay their import bills.

Professor Stephen Castles, who teaches sociology in the University of Sydney and Oxford, has noted that movements of people are a crucial element of global integration. In his opinion, “a major cause of migration is the growing inequality in incomes and human security between more and less developed countries. Further driving factors include uneven economic development; rapid demographic transitions; and technological advances in transport and communications. Increasingly, migrants do not shift their social existence from one country to another, but maintain transnational connections”

The UN Department of Economic and Social Affairs (UNDESA) indicates that in 2020 there were around 281 million international migrants in the world, which equates to 3.6% of the global population.

Antonio Vitorinio, the Director General Of International Organization for Migration (IOM) a UN body says that, “migration is a complex issue. As such, it is one that can be exacerbated by misinformation and politicisation to alarming degrees. Human migration and mobility may well be age old phenomena touching almost every society around the world. However, they have changed over time in important ways. Examining these shifts in scale, direction, demography and frequency can help us understand how migration is evolving, and can inform effective policies, programs and operational response on the ground”. Many experts feel that while focusing on international migration only might lead one to a deceptive trap, internal migration attracts less political attention as people move within their own countries. Population giants like China, India, Indonesia, Brazil and Nigeria face internal displacements due to various factors and their combined volume may far exceed international migration figures.

In a changing world, global economic integration is a causal factor driving international migration. The causal factors migration experts opine that encourage cross border mobility except in case of emergency migration, desperate to escape violence or disaster has to a large extent been determined by a deliberate choice factor where a person decides to leave home in search for a better life.

Steven Castle, in his detailed study, has underlined the following factors that drive the agencies of migration across the globe –

Migration can cause intense disability and politicking at an international level. After managing global trade governance institutionally, remarkable progress has been made by multilateral agencies led by the United Nations in managing migration governance. The differing interests of the Global South and predominantly the migrant- receiving states of the Global North, has continued to be the dominant constant theme in global migration governance. Migration is today inextricably linked to development, human rights, governance and security issues. In the UN Summit in 2016, the issue of forced and voluntary migration was raised for discussion. Refugee and wider migration agendas at the multilateral level remain strangely bifurcated. Growing legitimacy has been witnessed of late in discussing migration within the UN forum,but executing institutional reforms and operational practices has been tenuous. Conferences with non-binding outcomes on issues related to migration have often been the primary instrument to bring the issue in focus.

With greater convergence of interests on global issues at a wider level, many multilateral initiatives building a “coalition of the willing” have been seen to develop in tackling emerging areas such as protecting migrants in vulnerable situations. Development of agencies like Global Compact, GC Capital has helped usher in a less fragmented order, thereby leading to an evolution of a system of global migration governance facilitating “an opportunity to reconcile disjointed developments that seek greater system wide coherence”. In the current times, the issue of migration and immigration has become highly political. In a country like Bangladesh, 40 lakh countrymen have returned home during the COVID-19 pandemic, resulting in economic downturn and foreign exchange crisis.

To ensure safe, secure and economically viable immigration,a few primary requirements need to be fulfilled; a valid passport, work permit visa, an aeroplane ticket, appointment letter, contract form, smart card, financial backup to provide necessary immigration fees and adequate knowledge about the place of employment facilities, perks etc. Contract with a licensed immigration agency and the willingness to obey the laws and regulations of the destination country is necessary.

With the goal to achieve sustainable development for all by 2030, it is extremely important to see that international immigration is safe and blessed for all aspirants. The international community must ensure that an immigrant is provided the opportunity to change his place of employment under specific circumstances, which no one is allowed to confiscate the passport, contract form or other valid documents that legally belong to the immigrant.

READ ANOTHER IMPORTANT ARTICLE: PAKISTAN ARMY MAKER FOR GOOD OR BREAKER FOR BAD?

Cases of mass detention and expulsion of immigrants are minimised and decisions on migrants are made on a case to case basis. Ensuring human rights and fulfilling the basic needs of immigrants in a mutually convenient atmosphere is necessary. There must also be cooperation amongst countries at an international level to stop all avenues of illegal immigration, which is vitiating the atmosphere, disrupting social fabric within peace loving communities and disrupting peace and solidarity amongst countries.

UNCDF and UNDP have in a joint communique urged member countries to create a conducive atmosphere and legal framework where, in a lucid way, applications may be put in place for documentation and financial transactions related to immigration digitally. Countries in which immigration is common and encouraged must also set up a portal which is easily accessible to ensure aspirants get all necessary information centrally and are not duped by unscrupulous elements.

The stadiums in Qatar where the football matches of the World Cup 2022 were played are an apt testimony of the contribution of the immigrants in the international arena.

On the other hand, frequent news of Rohingya refugees, who are themselves victims of violence, being engaged in criminal acts of terror, kidnapping, loot and arson against the same people who have given them shelter and succor in times of great distress. The multicoloured hue of the migration scenario becomes both prominent and unnerving for us.