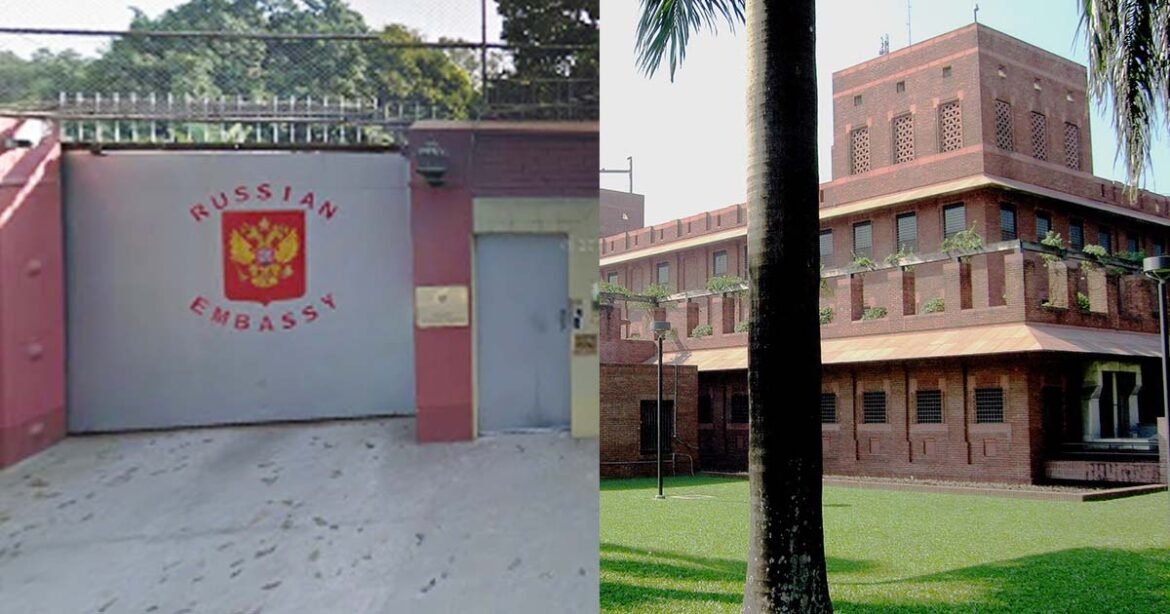 Over the past week, the United States (US) and Russia have had an open dispute over interference in Bangladesh’s internal affairs. Referring to the recent controversy over the US ambassador in Bangladesh, the Russian embassy in Dhaka issued a statement in which the US was indirectly accused of ‘trying to dominate’. Such statement from the embassy of another influential country like Russia, referring to the diplomat of another influential country like US, is an unprecedented event. On the other hand, according to the sources, at the same time covert activities were going on to prevent a banned Russian ship from entering Bangladesh.

The US and Russia appeared to have locked in a debate over political developments in Bangladesh. In a statement on Tuesday, the Russian embassy in Dhaka said that the country was ‘invariably committed’ to its principled stance on non-interfering in domestic affairs of third countries. The Russian embassy in Dhaka made this statement when some ministers of the Bangladesh government and leaders of the ruling party expressed their displeasure over the activities of the US ambassador Peter Haas assigned. It mentioned that according to the ‘United Nations Declaration on the Inadmissibility of Intervention in the Domestic Affairs of States and the Protection of their Independence and Sovereignty’ dated 1965, ‘no State has the right to intervene, directly or indirectly, for any reason whatever, in the internal or external affairs of any other State’.

YOU CAN ALSO READ: ARGENTINA ANNOUNCES TO REOPEN EMBASSY IN DHAKA

Meanwhile, trouble is brewing with embargoed Russian ships shipping in Bangladesh. According to the related sources, the Russian flag ship called Ursa Major left the St. Petersburg port of Russia on November 14 with the goods of Rooppur nuclear power plant. The ship was supposed to reach Bangladesh on December 24. But before the ship arrived in Bangladesh, the US told Dhaka that the ship named Ursa Major is actually a ship owned by Russia named Sparta Three that has been banned. This ship has been renamed and registered as Ursa Major. Allowing embargoed ships to enter Bangladesh may cause problems. On the other hand, there was pressure from Russia to allow the ship to board. The issue has reached the highest level in Bangladesh. On December 22, in a meeting of the Ministry of Science and Technology, in the presence of the Russian representative, it was informed that according to the policy, Bangladesh, being a member country of the United Nations, will not allow any prohibited ships to arrive. On that day, the Russian ambassador in Dhaka was also called to the Ministry of Foreign Affairs and informed about this. Bangladesh has said that in the future the country can send the goods of Rooppur power plant by the same ships that Russia used in the past, but not by any banned ship.

What could be the reason for this action of Russia?

The way in which Russia is supporting Bangladesh’s position in its counter-statements pointing to the US and Western countries is unprecedented. Since the 2014 elections, the US and Western countries have criticised Bangladesh over human rights issues, but China, India and Russia have not. In such a situation, the Ukraine war added a new dimension. Since the beginning of the war, world politics has been centred on the US and Russia, and countries in different regions of the world have been seen to take different positions. Some countries are directly connected to US and Europe. India, China and some other countries are not against US, and in the meantime they are maintaining good relations with Russia. So such a public statement by Russia raises some questions.

In this regard, Dhaka University International Relations Professor Tanjim Uddin Khan told the well-known news media BBC that there may be two reasons why Russia has taken an open stance in the case of Bangladesh. One is economic, as Russia is building a nuclear power plant in Bangladesh. As a result, their economic interests are involved here. The second reason is political. He said, “If we consider the political characteristics of Russia, Russia is also a kind of authoritarian state. As a result, Russia is interested in authoritarian regimes and if we look globally, Russia plays a leading role in supporting them to maintain influence in developing countries.”

What do the experts say?

The Awami League government has maintained a balance in relations with the US, India, China, Russia and the European countries since coming to power. But how long this balance will last is a big question. In this regard, Razia Sultana, a researcher at the Bangladesh Institute of International and Strategic Studies, a research organisation in Bangladesh, said, “The Russian embassy has appreciated the uniqueness that Bangladesh has maintained in its foreign policy through their statement. Bangladesh has expressed its position on neutral foreign policy from time to time. It can be seen in world politics, US and Russia tries to exert counter-influence against where it wants to exert influence. That is the major situation in the world now. So, it may be difficult for Bangladesh to maintain a balance in their foreign policy in future.”

On the other hand, it is creating a risk for Bangladesh, says Professor Tanjim Uddin Khan. He says, “Not only world politics, but also internal politics of Bangladesh is responsible for such a situation. The saddest thing is that our political parties have a tendency to find favour with powerful states.” Observers say that it will depend a lot on where the conflict of other big powers with the West will go in international politics, especially the war in Ukraine, and whether it will increase its influence on the politics of Bangladesh or not.