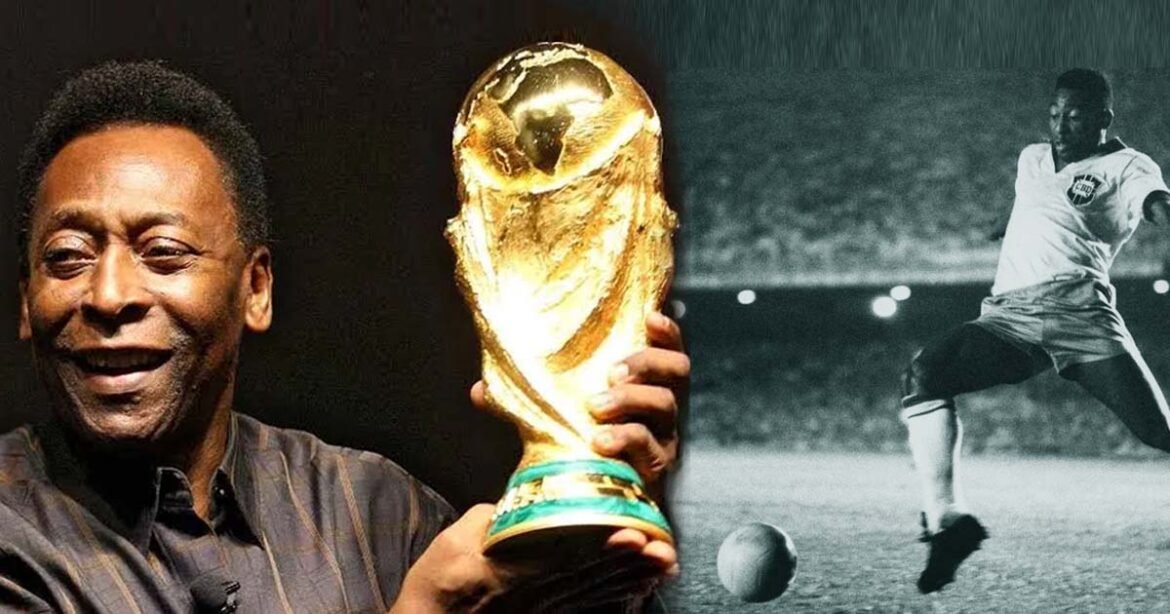 Pelé, one of the greatest and most well-known football players in history, passed away on December 9 in So Paul, Brazil. The soccer player died following a prolonged struggle with cancer and a lung infection at the age of 82.

Pelé is known as “O Rei” (“The King”) by the Brazilians and “The Greatest” by FIFA, established an everlasting impact on international sport with his extraordinary ability to score goals on the biggest stages. He was the only player to win the World Cup three times. Probably the most amazing phase of his long career that he reached the top at an early age on the grandest platform in the world.

Edson Arantes do Nascimento (Pelé) was born in Tres Coracoes, Brazil on October 23, 1940. Dondinho, Pelé’s father, was a talented footballer but a knee injury ended his athletic career, and the family fell into poverty. Pelé’s parents were unable to afford even a football.

The first “ball” his magical feet ever kicked was an old sock packed with newspapers, but that was all it took for him to fall in love with the game and for others to start realizing that he was exceptional. Pelé worked as a part-time shoeshine boy at the age of seven. Pelé’s mother, Celeste, was adamant that her son would not follow in his father’s footsteps, but by the time he was a teenager, scouts from Rio and Sao Paulo’s top clubs were knocking on the door.

The rise of “the greatest footballer in the world”

Waldemar de Brito, a scout and former footballer took Pelé under his wing by convincing his mother. After the trail round, Brito predicted that the 15-year-old Pelé would become “the greatest footballer in the world.”

Santos was a modest but ambitious provincial club when Pelé debuted in 1956, and he was crucial in transforming it into a national and then a global influence. In 1957, his first full season as a professional, he scored the most goals in the Sao Paulo state championship and also earned his first international cap.

Pelé was 17 when he played for Brazil in the 1958 World Cup finals in Sweden. The moment Pelé became the youngest footballer to play in the World Cup, his fame began to rise (and still the youngest to have scored a hat-trick, or to have appeared and scored in a final).

YOU CAN ALSO READ: HOW WORLD CUP IN QATAR BECAME A CAULDRON OF INTERNATIONAL LEADERS, DIPLOMACY, AND SPORTS?

Although he missed the first two games of the 1958 tournament due to injury, prominent members of the Brazilian team lobbied the manager to play both Pelé and Garrincha against the Soviet Union in the final group encounter. The release of these two players against the Soviets sparked the beginning of the Brazilian campaign. Brazil performed with a virtuosity that announced their entrance as the dominant, unstoppable force in world football.

Pelé scored six goals in their last three games, including the game-winner in the quarter-final, a hat-trick in the semi-final, and two in the final. His confidence and stature grew with every game.

Pelé, who is credited with coining the phrase “the beautiful game” to describe football, was essential in Brazil’s World Cup victories in 1962 and 1970. Pelé completed his World Cup career with 12 goals scored in 14 games.

The magical performer of the history

Pelé possessed an exceptional combination of athleticism, talent, and tactical insight. He could run 100 meters in 11 seconds, shoot with either foot and out leaping the tallest defenders. His strength and pace were spectacular as he charged for the goal, outsprinting or simply blasting past the defenses while maintaining a tight hold of the ball. He could also be a team player, which is uncommon for such a prolific goal scorer.

While he was still a teenager, powerful Italian teams attempted to lure him away from his Brazilian club, Santos FC, by offering an unprecedented $1 million for his signature. Janio Quadros, the president of Brazil, named Pelé a “non-exportable national treasure” in 1961, guaranteeing that he remained with the club for nearly two decades.

The statistics of Pelé is astounding. He showed his greatness by winning 3 World Cups out of 4, scoring 12 goals in 14 games. Prior to join the New York Cosmos in 1974 he spent almost two decades with Brazilian powerhouse Santos. He played in 1,363 games at the professional level and scored 1,281 times. His record of 92 hat tricks and 97 goals scored for his country’s national team has established as the greatest ever in this game.

The ambassador of football

The persona of the king of football has always been surrounded by a certain amount of mysticism along with talent and charisma. Pelé devoted a great deal of time and energy to increasing soccer’s popularity. He wrote autobiographies and even appeared in a number of documentaries and semi-documentaries on soccer or his career as a player.

Pelé came out of retirement for two years after his initial retirement to help popularize soccer in North America. To get more people in the United States interested in the “beautiful game” of soccer, he played in the North American Soccer League.

In an exhibition match between the Cosmos and the Santos, he started with the former but switched teams at halftime. During the exhibition match, he leveraged his fame to send a message of love and peace to the fans in the stands by having them yell “Love! Love! Love!”

Pelé showcased his acting and singing talents towards the end of his football career. His other skills were also utilized to spread soccer and international understanding.

In December 2021, Pelé was admitted to the hospital and given chemotherapy treatment. He underwent surgery in September 2021 to remove a tumor from his right colon after doctors identified the condition during normal testing. From last month, it was reported that his health condition had been deteriorating.

Jair Bolsonaro, the outgoing president of Brazil, has announced three days of national mourning to honor Pelé. Pelé’s funeral will be held at the Vila Belmiro stadium outside Sao Paulo, where he played some of the best games of his career.