How World Cup in Qatar became a cauldron of international leaders, diplomacy, and sports? 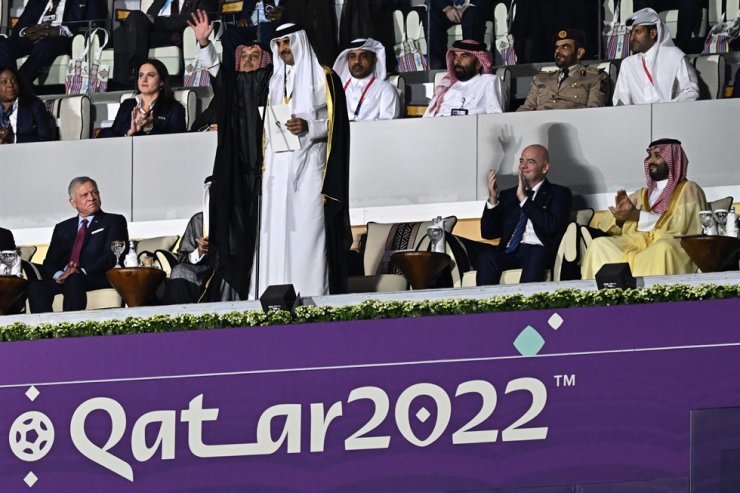 Many high-ranking officials reportedly traveled to Qatar to cheer their teams and conduct biz discussions which have increased the Gulf nation’s diplomatic involvement.Qatar is hosting the FIFA World Cup this year. The most awaited event which happens every four years has been at the center of attention worldwide.

Not only football enthusiasts but also dozens of top global leaders have been enjoying the game from the stadiums. Such as the president of France, Emmanuel Macron was seen supporting his team “Les Bleus” at the stadium on Wednesday as they defeated Morocco to qualify FIFA World Cup final this weekend.

You Can Also Read: END OF ERA: GREAT FOOTBALLERS WHO’LL GRACE THE OCCASION ONE LAST TIME

Representative Ilhan Omar, a Democrat from Minnesota, attended the United States vs. Wales game last month with David Beckham. “It was nice watching a World Cup game with him,” she posted online. U.S. Secretary of State Antony J. Blinken was also at that game before he met with Qatari officials to discuss policy.

Along with Mr. Blinken and Ms. Omar, other representatives have been applauded by the audience, including Mayor Eric Adams of New York, Senator Christopher S. Murphy of Connecticut, Todd Young of Indiana, Rep. Darrell Issa of California, and Senator Todd Young of Indiana.

Timmy T. Davis, the new U.S. ambassador to Qatar, has attended numerous matches and posted several social media updates on the event, including a video of him and the Dutch ambassador preparing breakfast together before their teams’ matches.

Qatar acts as diplomatic broker amid the games

Qatar is a small but wealthy kingdom in the Persian Gulf. More than ten years ago, it set out to raise its status by hosting FIFA World Cup. Despite ongoing criticisms of corruption, exploitation of migrant workers, and criminalization of homosexuality, it has been successful in hosting this show-stopping event.

This World Cup is taking place during one of the most tumultuous periods in recent global history. Many nations are trying to cope with Russia’s invasion of Ukraine, the pandemic, inflation, a food shortage, and environmental disasters. The tournament has opened a floor for international leaders to debate these topics while participating in football fandom.

The World Cup also strengthens Qatar’s position as a diplomatic intermediary. Before the games, President Biden called Qatar a “major non-NATO ally,” and U.S. officials had come to rely on it to assist them in communicating with Iran, the Taliban in Afghanistan, and the Palestinians.

The event exemplifies how politics and sports frequently intersect. Since the World Cup started on November 20, world leaders and top officials have flown to Qatar to watch games and attend meetings, occasionally literally on the sidelines.

Utilizing the scope of discussions among countries

More than a dozen heads of state were at the opening ceremony. Most of them were from the Middle East. After leading a 43-month regional boycott of Qatar that ended last year, Saudi Crown Prince Mohammed bin Salman went to Qatar to express unity with the Qatari emir.

On Wednesday, Mr. Macron met with Qatari officials in Doha. He stated that he would continue the conversation when he returns for the final game on Sunday. British Foreign Minister James Cleverly claimed he had “difficult conversations” with Qataris regarding human rights. The New Jersey Democrat and chairman of the Senate Foreign Relations Committee, Bob Menendez addressed Afghanistan, Libya, and Lebanon with the foreign minister of Qatar. Ms. Omar discussed human rights while she was in Qatar.

According to Ali al-Ansari, a spokesman for the Qatari government, “the impact of the World Cup extends beyond the soccer community.” “The world has never been more divided, so events like this are a timely reminder that we have far more in common than we think,” he added.