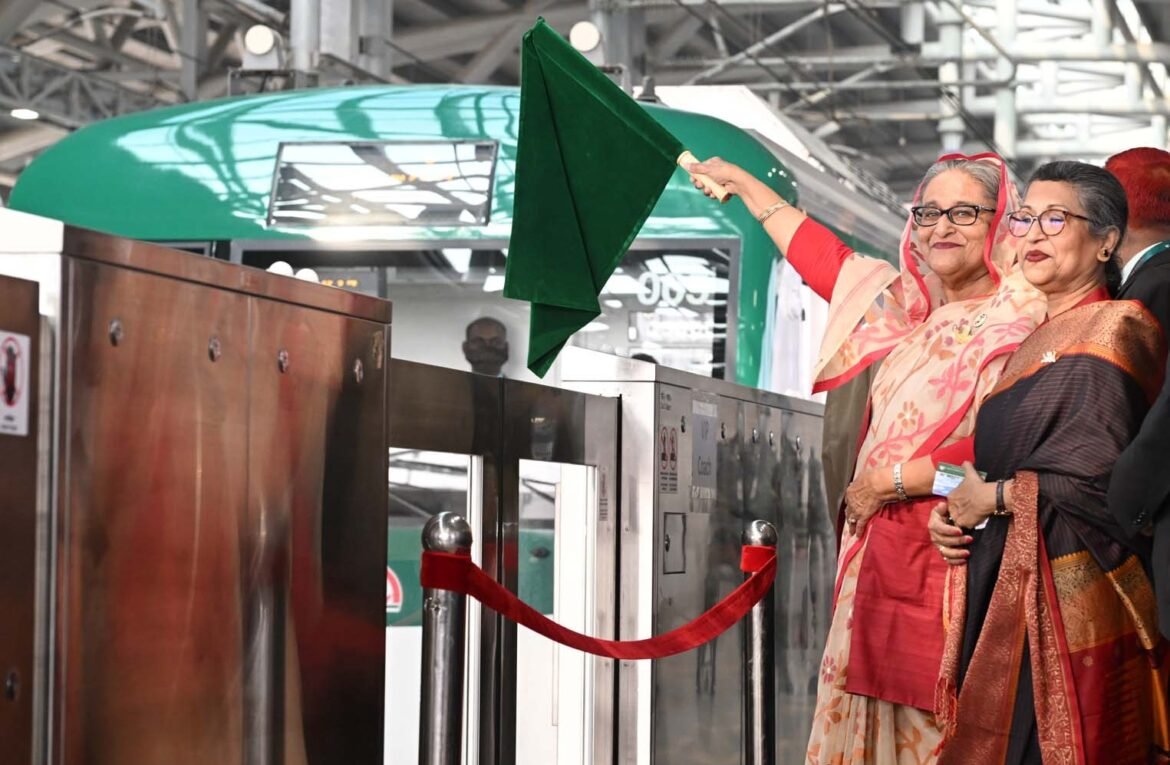 Today marks the beginning of a new era in Bangladesh as Prime Minister Sheikh Hasina inaugurated the country’s first elevated metro rail system in Dhaka. Bangladesh is the third nation in South Asia to operate a metro rail system. The partial functioning of the elevated metro railway, also known as the above-ground metro began Today, marking the commencement of the nation’s first electric-powered, eco-friendly rail.

With the inauguration of the metro rail, the country announced the arrival of a modern transportation system. The first phase of the project, from Sector 15 of Uttara to Agargaon, was officially opened by PM Hasina. After purchasing a ticket, she boarded the initial official transport from Diabari of Uttara to Agargaon.

In inauguration ceremony, HPM Sheikh Hasina emphasized the four significant important milestones in the nation’s growth that the opening of the metro rail has brought about. According to the prime minister, the fact that Bangladesh has a metro train system is already a success. A further accomplishment is that the project will be environmentally beneficial because the trains will be powered by electricity. The ability to remotely operate the trains is an important step towards creating a Smart Bangladesh. It will also be the start of high-speed trains in Bangladesh, which can go up to 110 kilometers per hour, she added.

She emphasized on keeping the metro rail clean by saying, “Everyone must be careful when riding metro rail. Everyone needs to care of it. I request everyone to do so”.

From tomorrow, city residents will have access to the eagerly anticipated Dhaka Metro Rail service, which cost Tk33,472 crore to build. The recently opened 11-kilometer Uttara-Agargaon metro rail is part of MRT-6, one of the six routes that traverse the capital city and its surroundings. The 22km Metro-6, once fully finished, will run from the Dhaka University campus via the Motijheel business zone and on to Kamalapur railway station.

Initially, the metro train will operate nonstop between the stations of Uttara and Agargaon from 8:00 am to 12:00 pm every day. All intermediate stations will start carrying passengers on March 26, 2023.

According to Road Transport and Bridges Minister Obaidul Quader, it will initially take 10 minutes to reach Agargaon from Uttara via metro rail, and 17 minutes once all stations are open. The section of the metro rail line from Agargaon to Motijheel will be ready by December 2023, and the section from Motijheel to Kamalapur would be built by 2025. The distance between Uttara and Kamalapur will be 22 kilometers when the metro train project is finished, he noted.

The state-owned Bangladesh Road Transfer Corporation (BRTC) will run 30 double-decker buses to transport passengers between metro rail stations and bus stops. The movement, speeds, and stops of the trains would be managed centrally via software. The operations control center (occ) at the Diabari depot in Uttara will be in control the systems.

When The Mass Rapid Transit (MRT) -6 is up and running all the way to Kamalapur, it is expected to carry 60,000 people per hour. MRT network is about 129 kilometers, of which 61 kilometers are underground, is expected to help city commuters who are often stuck in Dhaka’s notorious traffic, which slows vehicles to as low as 4.5kmph. This means that vehicles on Dhaka city roads move at an average speed slower than normal walking, even though the government has spent Tk28,000 crore on road infrastructure in the last ten years. The metro rail service is expected to solve the decade long issue of traffic congestion.

Iwama began speaking at the ceremony in Bangla, emphasizing the history of the relationship between Bangladesh and Japan as well as his desire to strengthen it.

Tomohide praised the metro rail project as a “shining example” of bilateral collaboration.

The metro rail project is funded by the Japan International Cooperation Agency (JICA). Japan is contributing roughly 60% of the cost via soft loans.

Both single-use tickets and long-term MRT passes will be available for purchase in Bangladesh’s first urban transit system. According to representatives of the Dhaka Mass Rapid Company Limited, the MRT pass can initially only be purchased from the metro rail station counter by depositing a specific amount. The minimum fare of the ticket is fixed at Tk 20.

From Uttara Uttar station, a direct train will arrive at Agargaon station (Diabari). The cost to travel from Uttara North Station (Diabari) to Agargaon Station during the first phase of the metro rail’s operation will be Tk 60. In between, there are seven other Metrorail stations.

It costs Tk. 20 to go from Uttara-North Station to Uttara Center and Uttara-South Station. Additionally, the fare to Pallabi and Mirpur-11 stations from the first station Uttara North is Tk 30, the fare to Mirpur-10 and Kazipara stations is Tk 40, and the fare to Sheorapara station is Tk 50.

On the other hand, the fare from Kamalapur to the Dhaka University station is Tk20. The two stations between Motiheel and Sacibalay have the same prices as well. And from Kamalapur, the fare is Tk 30 to Shahbagh and Karwan Bazar, Tk 40 to Farmgate, Tk 50 to Vijay Sarani and Agargaon, Tk 60 to Sheorapara, Tk 70 to Kazipara and Mirpur-10, Tk 80 to Mirpur-11 and Pallabi, and Tk 90 to Uttara South.

Additionally, the metro rail’s operator and maintainer, Dhaka Mass Transit Company Limited (DMTCL), will give a 10% discount if the fare is paid with a smart card. If someone misses his/ her stain, he/she will have to incur a fine of 10 times the fare.

Moreover, a train will wait 10 minutes at each station platform for passengers during the first few days. According to a Dhaka Mass Transit Company Limited spokesman, this will give passengers additional time to purchase tickets, board, and exit the trains.

The government intends to build six metro rail lines by 2030. To safeguard the safety of passengers and infrastructure, a law has been passed authorizing the creation of a special police unit called the “Mass Rapid Transit Police.” The Metropolitan Police of Dhaka have been tasked with providing security for the time being. There will be a total of four gates on the two sides of each station. A total of eight police officers, two at each entrance, will provide protection at the gates. They will be supervised by an officer.

Launching Metro rail service for Bangladesh is an achievement and milestone for the whole nation. Bangladesh has been experiencing tremendous development under the leadership of HPM Sheikh Hasina. Even though metro rail is only one part of the plan, it is the start of an integrated urban transportation network that will be good for a country’s capital city that is growing quickly and desires to be a high-income economy in less than 10 years.