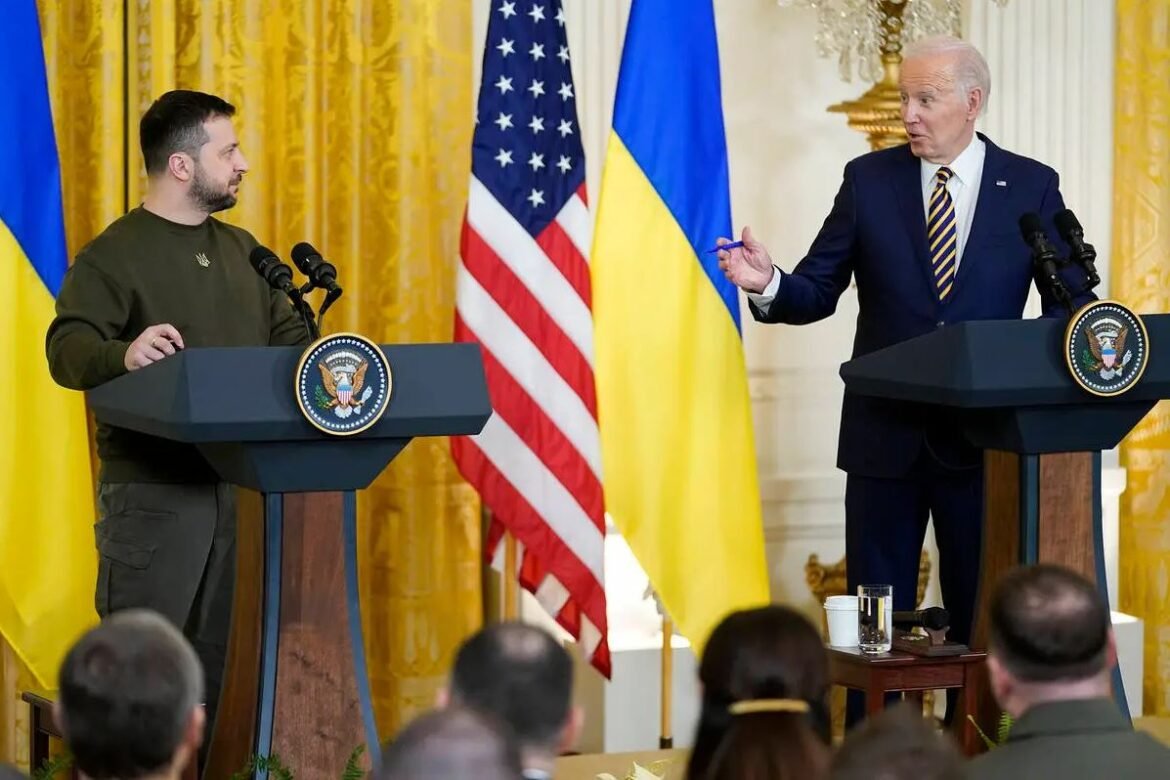 Volodymyr Zelenskyy, the president of Ukraine, traveled to Washington for a meeting with President Joe Biden and to address the US Congress. This was his first known trip outside of Ukraine since Russia initiated its invasion in February.

Zelenskyy tweeted on Wednesday that the purpose of the trip is “to strengthen resilience and defense capabilities” of Ukraine and to meet with Biden to discuss bilateral relations between his Ukraine and the US. Predictably, the visit was kept a secret, with formal confirmation only arriving hours before it was scheduled to begin. The trip is very important because it comes after 10 months of a brutal war that has killed and injured tens of thousands of people on both sides and left civilians in Ukraine in ruins.

The “United defense” of US and Ukraine

The US has been Ukraine’s most crucial supporter in the conflict, providing $50 billion (£41 billion) in security, financial, and humanitarian aid – considerably more than any other nation. Since the beginning of the war, Zelenskyy and Western leaders have spoken on the phone frequently. But by inviting the president to the White House, President Biden indicated that the U.S. will support the country for “as long as it takes,” which is already chanted many times. Additionally, Zelenskyy remarked in a tweet that the victory of Ukraine over Russia “will also be America’s victory.”

You Can Also Read: RUSSIA-UKRAINE WAR: WHERE IS IT HEADED?

In a statement on Tuesday night, White House press secretary Karine Jean-Pierre said that Biden was looking forward to the trip and that his speech to Congress will show “the strong, bipartisan support for Ukraine.”

President Joe Biden greeted Zelenskyy in the Oval Office on Wednesday morning, stating that the United States and Ukraine would continue to address a “united defense” in the face of Russia’s “brutal assault on Ukraine’s right to exist as a nation.” According to Zelenskyy, his visit proved that the “situation is under control, because of your support.”

US lawmakers are about to vote on a spending plan for the end of the year that includes about $45 billion in emergency aid for Ukraine. This comes as the Pentagon is ready to deliver Patriot surface-to-air missiles to Ukraine to defend itself. Both US and Ukrainian officials have stated explicitly that they do not see an immediate end to the war and are planning for it to last for some time. Biden has emphasized that although the US will provide Ukraine with arms and training, but the forces will not take part in the fighting directly. Ukraine apparently spends about $5 billion (£4.1 billion) a month on defense.

US to send more support

The White House has declared that it will provide $1.8 billion in military supplies to Ukraine, that includes a Patriot missile battery and precision-guided bombs for the country’s fighter jets for the first time. The aid is a sign that the US will send more advanced weapons to Ukraine to help it defend against the increasing number of Russian missiles in recent weeks. According to officials, the package will contain around $1 billion in weapons from the Pentagon’s stocks and $800 million in funds from the Ukraine Security Assistance Initiative.

The decision to deploy the Patriot battery was made even though Russia’s foreign ministry said that delivering the advanced surface-to-air missile system would be seen as a provocation. Moreover, the ministry added that the Patriot and any crews that went with the battery would be a legitimate target for Moscow’s military.

Since US troops would need to teach Ukrainian forces on how to operate the high-tech system, it is unclear when the Patriot will reach the front lines in Ukraine. It is anticipated that the training will be completed in Germany and could last for many weeks. Up to this point, the US and its Western partners have only trained the Ukrainian military in Europe.

The soon-to-be-announced package will also include an unspecified number of Joint Direct Attack Munitions kits, or JDAMs, according to authorities. The kits will be used to change bombs by adding tail fins and precise navigation systems so they can be guided to their targets instead of just being dropped from a fighter jet. The JDAMs are used by US fighter and bomber aircraft, and the Pentagon is modifying them so that Ukraine’s air force can employ them. Zelenskyy and other Ukrainian officials had earlier asked Western leaders for more advanced weapons, especially for air defense. The Patriot would be the most advanced surface-to-air missile system the West has given Ukraine to help defend against Russian air attacks.

Zelenskyy has joined a big list of foreign leaders to attend joint sessions of the Senate and House. He told the U.S. Congress that the tens of billions of dollars it gave to help Ukraine fight the Russian invasion were not any charity but an investment in global security. “Your money is not charity. It is an investment in the global security and democracy,” he remarked.

“It is a great honor for me to be at the U.S. Congress and speak to you and all Americans. Against all doom and gloom scenarios, Ukraine did not fall. Ukraine is alive and kicking,” stated Zelenskyy while praising US for the assistance. “We defeated Russia in the battle for the minds of the world,” he added.

As Republicans are expected to gain control of the House on January 3, Zelenskyy told lawmakers in the House of Representatives chamber that he hoped they would continue to support Ukraine on a bipartisan basis.

Is Zelenskyy invoking the war to continue?

There are no signs of peace talks to end the war, and both Russia and Ukraine have said they want to continue the battle. However, Zelenskyy said he talked to Biden in the White House about a 10-point plan for peace between Ukraine and Russia. “I’m glad that President Biden supported our peace initiative today. Each of you today ladies and gentlemen can assist in the implementation to ensure that American leadership remains solid, bicameral, and bipartisan,” he told the legislators.

In response to a question on how Ukraine intended to resolve the conflict, Zelenskyy rejected Biden’s definition of “just peace,” saying, “For me as president, “just peace” is no compromises.” He said the war would end when Ukraine’s sovereignty, freedom, and territorial integrity were restored and it got “payback for all the damages inflicted by Russian aggression.”

A perfect timing for Washington visit

According to a senior US administration official, Biden and Zelenskyy first discussed the idea of the visit to Washington during their most recent phone conversation on December 11, and a formal invitation was issued three days later. Zelenskyy accepted the offer on Friday, and the event was scheduled for the congressional address on Sunday after the White House started working with House Speaker Nancy Pelosi to make arrangements for it. Just 300 days after Russian troops invaded Ukraine and rocket attacks that have left Ukrainian cities in ruins, he arrived knowing that the Senate and House control the US’s financial plan.

Zelenskyy’s timing couldn’t have been better as Congress is about to approve an additional $44.9 billion (in emergency military and economic aid) on top of the almost $50 billion already provided to Ukraine this year.