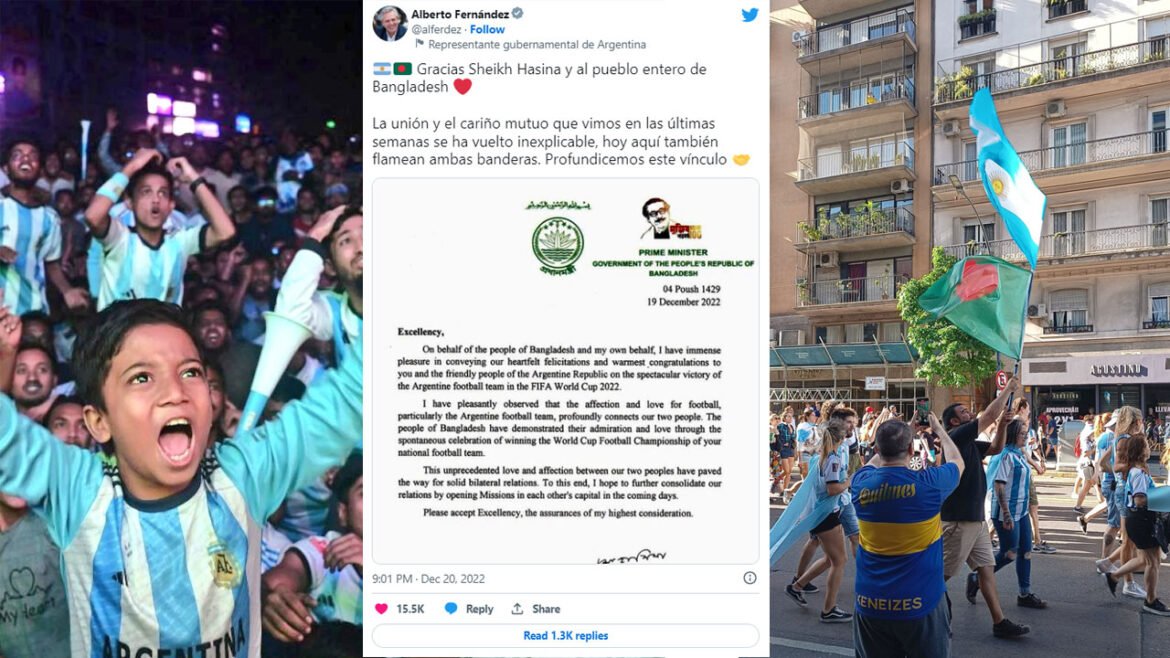 The latest FIFA Football World Cup is over with Argentina lifting the trophy of the Champion. In every four years, this greatest and most awaited show brings joy and euphoria to millions of fans around the world, and this euphoria goes beyond the 32 countries that compete for the most prestigious football trophy in the world. Bangladesh isn’t impervious to the excitement and rhapsody of the “greatest show on earth.” In fact, in some ways, Bangladeshi football fans are even more crazy and obsessed than fans of Brazil, Argentina, Spain, Germany, and France.

The indomitable craze for Football

Bangladesh, rated 192nd in the FIFA rankings, is not a “great” or “historical” football nation. People with extensive knowledge of modern football may not even recognize Bangladesh on the global football map. The Bangladeshis, however, continue to make themselves float in this exhilaration in spite of this. They support teams they like and cheer for them. Not only do they support them, but they also display fervent affection for the group.

You Can Read: SUCCESS ON THE BACK OF STRUGGLE: UNTOLD TALES OF WOMEN SPORTS IN BANGLADESH

No one would think that we do not compete in the World Cup if they saw the excitement around the tournament here. This excitement is felt all over the country, from Dhaka to Chittagong, from Teknaf to Tetulia, and from the major cities to the remote villages.

Anybody may mistake Bangladesh for Argentina, Brazil, Germany, France, Spain, or any other country since their flags are flown so high. Some fans even paint their houses with the colors of the flag of their favorite team. The hype or emotion is not limited to watching the favorite team play, in several social media videos, fans are seen crying and shedding tears of joy when their teams win.

Previously, the football world was unaware of the excitement and joy Bangladeshi fans were experiencing in connection with the World Cup, but this new instance of football ecstasy has transformed the situation. This time, the rest of the world was able to see how cheerful football fans in this country were, and they were amazed.

Love for Argentina finds its way back

While there are supporters of European powerhouses like Germany, England, Portugal, and Spain, most people in this nation often cheer for two neighboring and competitive football teams, Brazil and Argentina. Argentine supporters are particularly numerous, and they have affection for two entities: the national team of Argentina and Lionel Messi, the modern GOAT (Greatest of All Time).

The root of the love of La Albiceleste begins with the late Diego Armando Maradona’s legendary display at the 1986 World Cup in Mexico. This was the first world cup to be live telecasted in Bangladesh. The Bengalis fall in love with the little magician. When Maradona’s Argentina lost the final match against Germany in Italy in 1990, there were protest rallies around the country for the ‘dubious call’ by the referee.

Bangladeshi football fans received recognition for their craziness at the 2022 Qatar World Cup after at least four decades of fervent support for the Argentina side. During the past few weeks of the FIFA World Cup, Argentina’s Bangladeshi fanbase made international headlines on various occasions. FIFA itself shared a clip of Bangladeshi fans cheering while Argentina beat Mexico.

After FIFA posted the video of Bangladeshis celebrating Messi’s goal, the entire footballing globe became aware of Bangladesh’s passion for Argentina. Even English football legend like Gary Lineker was astonished to witness this admiration for Bangladeshis.

Many Argentine media sources praised the fanaticism of Bangladeshi Argentina fans and expressed their amazement at their devotion. Argentines were astounded by the admiration and assistance from another country. “Bangladesh-er doa chai!” [We seek Bangladesh’s prayers!], they kept telling before the finals.

As a gesture of gratitude for decades of support, Argentine football fans created a Facebook group for Bangladesh cricket team fans from Argentina. The group gathered up to 200,000 members in just two weeks. People in Argentina began following and supporting Bangladeshi cricket after seeing the country’s love for their nation. When Leonel Messi and the World Cup-winning team returned to Buenos Aires many Argentines were seen flying Bangladeshi red and green flags beside their native ones.

The diplomatic revival of Argentina-Bangladesh ties

The level of people-to-people connection was not unnoticed in diplomatic circles in Argentina. Santiago Cafiero, Argentina’s foreign minister, announced through Twitter that he would start steps to reopen Argentina’s embassy in Bangladesh, which was shut down in 1978.

Bangladesh Prime Minister Sheikh Hasina wrote a letter to Argentina’s President Alberto Ángel Fernández congratulating the latter’s winning the world cup. The letter said “I have pleasantly observed that the affection and love for football, particularly the Argentine football team, profoundly connects our two people. The people of Bangladesh have demonstrated their admiration and love through the spontaneous celebration of winning the World Cup Football Championship of your national football team,”

“The unprecedented love and affection between the two nations have paved the way for solid bilateral relations. To this end, I hope to further consolidate the relations by opening missions in each other’s capital cities in the coming days,” she concluded.

President Fernández replied to the letter in a tweet saying, “Thank you Sheikh Hasina and the entire people of Bangladesh. The union and mutual affection that we have seen in recent weeks have become inexplicable, and today both flags are flying here as well. Let’s deepen this link.”

After Brazil won a match against Switzerland, FIFA released a post in which the highest football governing body did not forget to tell the world about the craze of Brazil fans in Bangladesh. The caption reads, “Nothing brings people together like football. Huge crowds gathered in Dhaka, Bangladesh last night to see Brazil beat Switzerland in the FIFA World Cup.”

Gulf Today reported that a person in Bangladesh sold his mango farm to raise money to create a South Korean flag that was four kilometers long.  The man supports this Asian team in the FIFA World Cup.

BBC reported in the news that a Bangladeshi farmer has made the longest German flag (5.5 KM long) to support his team.

The Washington Post highlighted the craze and competition of Brazil and Argentina fans in Bangladesh. It reported, “They say you can feel it in the air in Bangladesh, where the flag sales have intensified, where the Dhaka Tribune reports they have decorated three bridges around the lake town of Rangamati with the various colors (two Argentina, one Brazil) and where you might sit in any stall in Dhaka sipping tea while suddenly hearing Argentina-Brazil chatter.”

Bangladeshis have a different sentiment when it comes to supporting their favorite Football teams. This time the world saw the craze from social media. Even, famous news agencies like BBC, Aljazeera, AFP, The Washington Post along with FIFA tweets have helped the world to know about Bangladeshi fans. The world has witnessed that Football or sports in general unite nations.