SUCCESS ON THE BACK OF STRUGGLE: UNTOLD TALES OF WOMEN SPORTS IN BANGLADESH 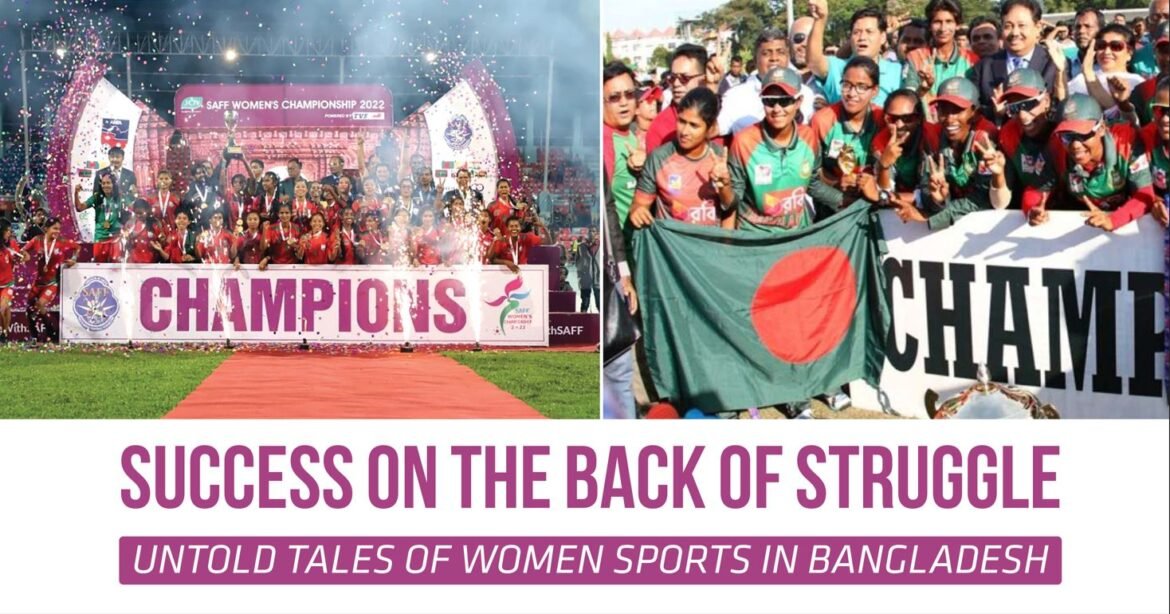 The members of Bangladesh Women’s Football Team received rave reviews and receptions upon winning their first SAFF Women Championship by defeating hosts Nepal 3-1 in the September grand finale. In South Asian women’s football, Bangladesh had previously won age-level competitions, but this was the first time they were taking home the senior championship and they did it in style by defeating the two top teams in the region – India and Nepal. After their historic feat, the whole country acknowledged the contribution of female athletes in the sports fraternity. But the wholehearted felicitations are not like anything they’re used to enjoying. In fact, they have pushed the society standards, broken stereotypes, and struggled to bring the changes.

In the past three years, female athletes from Bangladesh have carved out a special position for their nation’s red- green flag in a variety of international contests. From cricket to Olympic, they have proven their worth in mul- tiple sports. But, female athletes in Bangladesh don’t receive as much attention as male athletes do. However, the Bangladesh women’s national cricket team, football team, and athletes have garnered some hype in recent SPORTS years. Other games and sports include swimming, archery, and weightlifting etc. Numerous Bangladeshi female athletes participate in these sports and represent the nation internationally. But we might have read or heard their name in the media once or twice. But after the Bangladesh Women’s Football Team won the SAFF Women’s Championship, the nation gave female players the recognition they deserved over the years.

You Can Read: SPORTS – THE UNSEEN ARM OF GEOPOLITICS

THE ACHIEVEMENTS BY OUR FEMALE ATHLETES

FOOTBALL: Bangladesh women defeated Nepal in the 2015 final of the AFC U-14 Women’s Football Champi- onship to win the regional championship. That was Bangladesh’s under-14 women’s team’s greatest accom- plishment to date. The Bangladeshi youths once again won the competition this year. The latest addition is the SAFF Women Championship 2022 title.

CRICKET: The Bangladesh women’s cricket team defeated India to win the Asia Cup title in 2018. Addition- ally, the women’s cricket team from Bangladesh has successfully qualified for the 50-over Cricket World Cup for the first time. Bangladesh won the ICC Women’s T20 World Cup Qualifier 2022 by defeating Ireland by seven runs in September’s thrilling final and qualified for the ICC Women’s T20 World Cup in South Africa the following year.

Apart from teams, there are few individuals who made us proud with their records of achievements. Some of them are-

Dia Siddiqui just earned the bronze medal at the Asian Archery Championships Even though the tournament was called Asia Cup, the standard was after the World Cup because the Korean archers who won gold in Japan Olympics also participated. Bangladesh made significant progress internationally with Dia’s medal win

Mabia won a gold medal for the nation at the SA Games in 2019. Mabia represented Bangladesh and won the 63-kg division gold medal in the South Asian Games in Guwahati, India, in 2016. At the 2015 Commonwealth Weightlifting Championships in Pune, India, she won a gold medal and two silver medals in the 63 kg weight class for seniors and juniors. Additionally, Mabia won a bronze medal in the 2012 South Asian Weightlifting Championships and a silver medal at the 2013 Commonwealth Games in Malaysia.

Shirin Akter participated in the 2016 Summer Olympics. Shirin ran the 100 meters and won several national championships. She received 33 national victories in total, 27 of which were gold and six silver. Also, she has international accomplishments. Shirin won four bronze medals for Bangladesh. Shirin’s best timed was an 11.99 second heat time at the 2016 SA Games.

Sonia typically competes in a 50-meter freestyle for the Bangladesh Navy. She garnered 95 medals and 6 national crowns. In international tournaments, Sonia shown similar talent. At the SA Games in 2010 and 2016, she won two bronze medals. Tumpa’s best time for the 50m freestyle was 30.86s. She was chosen to compete in the 50-meter freestyle event for Bangladesh in the 2016 Olympics. She nevertheless made an effort to win something for Bangladesh despite the fact that her 30.86s record was insignificant in comparison to the other Olympic swimmers.

THE STRUGGLES OF THE WOMEN ATHLETES

Though recently the female athletes are being praised a lot in our country, but they face obstacles in multiple aspects. From family to society they have to fight for the choices they make in the sports industry. Unequal pay scale, social stigma, no facilities, minimal training resources and many uncountable hurdles are present in their journey of sports.

A few decades ago, sports were considered to be ‘man’s game’ in the minds of the common people in Bangladesh. Football, cricket, archery, and weight lifting were and are taboo activities for girls. Sports have been said to be the opposite of girls’ nature, health and dignity. Girls were expected to stay at home and enjoy their lives in private, according to the society’s code of conduct. The society even makes an effort to in- clude religion into this situation. Consequently, it is difficult for girls to enter the world of athletics.

The first barrier that females face in our society is from their families, who do not want to let them participate in sports. Family dis- approval makes it hard for girls to pursue sports alone. Family barriers are mainly due to social stigma, censure from neighbours, fear of religious taboos and social prejudices. In front of many people, girls will play, run, run in shorts, jerseys – family and society guardians cannot accept it. So, girls who desire to be sports and their families must face harsh remarks, comments, sarcasm, slander, and slander. The society still does not naturally encourage women to participate in sports, and instead makes several attempts to put an end to sports. Many families believe that sports will ruin girls’ looks in the sun and rain. Following that, getting married will be challenging. Because, it is still believed that it is the destiny of women to marry and raise children.

Their place must be within the four walls of the house, not in the outside world.

NO FACILITIES WITH NO SELECTION PROCESS

Professional women players are not emerging in Bangladesh along the lines of female athletes’ triumphs. However, there is not any proper selection process for the players. Many sports do not have centers for facilitating the new players.

“The infrastructure for women to emerge as professional play- ers has not been developed in Bangladesh. Only in BKSP there is a system for producing play- ers. But beyond that there are many players in Bangladesh. The system that needs to be in place in the district upazila to develop them has not been created. Financially, there is no security system for a female player.”

Former cricketer Zakir JC says, “the infrastructure for women to emerge as professional players has not been developed in Bangladesh. Only in BKSP there is a system for producing play- ers. But beyond that there are many players in Bangladesh. The system that needs to be in place in the district upazila to develop them has not been created. Financially, there is no security system for a female player.”

You must instruct her. You must concentrate on the person who is doing well. She must be given whatever she requires. Many athletes who participate in sports like football, cricket, or any other may claim to be underprivileged. We do not wish to assess. However, there isn’t a systematic plan in place to develop female cricket players from the high school level,” She added.

According to World Bank data from 2021, male and female waged workers in Bangladesh are 43.6% and 34.6%, respectively. While the difference between male-female workers is reducing, the wage distribution is not reducing. However, after our female athletes’ historic SAFF victory, the disparity in the sports industry came back into the limelight.

According to BCB’s current salary structure, a male cricketer earns Tk 2 lacs for a T20 international match while a female gets Tk 14 thousand. The monthly salary for even the highest-graded female cricketer is Tk 60 thousand, which is significantly less than the price for a three-hour male T20 match. It’s even worse for football players. A top club male footballer gets 50-60 lacs yearly, whereas a top women footballer earns 3-4 lacs. The alarming thing is that no female athletes in Bangladesh receive regular monthly salary for sports other than football and cricket.

The fund for female players is a major reason for this imbalance. Any sports organization’s board generates money via sponsors, TV rights, match tickets, etc. Fe- male cricket generates less money from these industries than male cricket. Compared to cricket, male football is unpopular, let alone female. Therefore, the female division of these sports cannot make as much money as their male colleagues. In the end, the board can’t compensate players well. Wage is depending on work type and hours, while bonus is for good performance. Regardless of gender, all players have to wake up early, sweat in practice, and play the same number of overs. Each party is subject to the same working conditions. Although the government declared they will raise the pay structure following the SAFF championship, the situation will not soon change.

INITIATIVES TO SUPPORT WOMEN IN SPORTS

Sports in the modern world are regarded as one measure of a nation’s overall progress. In addition to social and economic advancement, sports have a huge impact on the global arena. Sport has evolved into a special tool in the process of growth because of this. There has been no slacking off on this front in Bangladesh. The government has launched numerous initiatives in the last few years to promote sports, which have become well-known both domestically and abroad. Sports are also SPORTS very important to ending inequality between men and women be- cause they improve the physical and mental health of women.

While hailing the country’s champion female footballers on No- November 8, Prime Minister Sheikh Hasina also handed over cheques worth Tk 13.7 million for the players and support staff. Cash-rich Bangladesh Cricket Board, too, announced Tk 5.0 million reward for the SAFF Champions. Bangladesh Army declared Tk 10 million for these winners. Along with these reward, the Ministry of Sports is also making unrelenting efforts to take women’s sports forward so that everyone in the community, who are physically fit, can take part. To secure women’s involvement in sports and their spontaneous enjoyment, the ministry has already signed some partnerships. If required support is provided to female athletes, there’s scope of further feats in the emerging arena of sports.