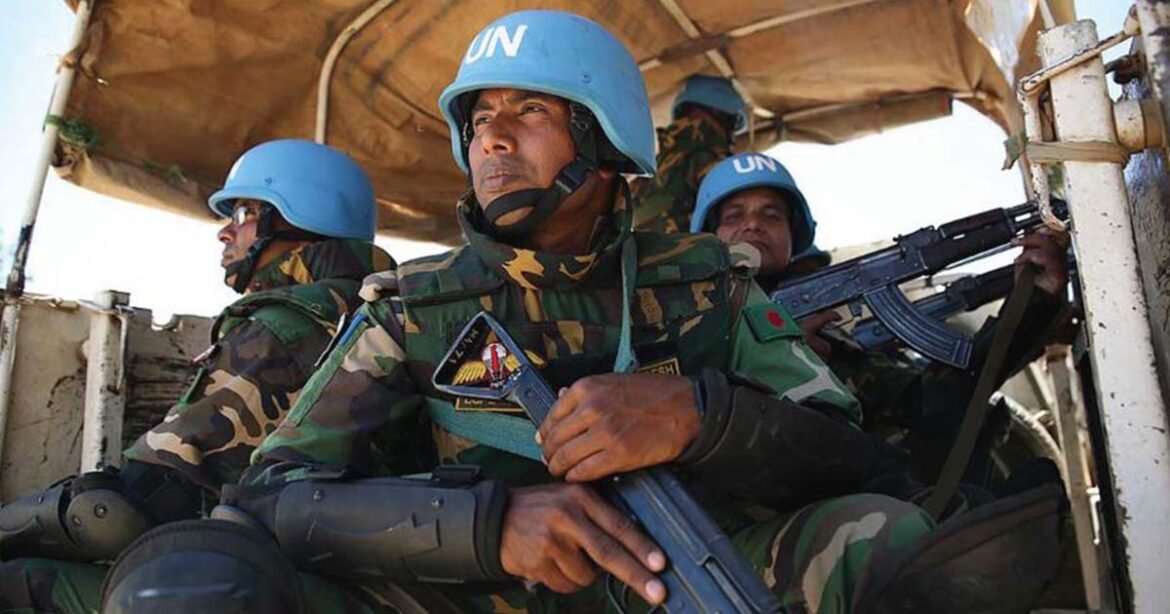 The brave peacekeepers of Bangladesh are making a unique contribution to global peacekeeping and security by taking part in the UN-mandated peacekeeping missions around the world, which has brightened the country image further. In addition, Bangladesh has regained its position as the top peacekeeper providing country and the top contributing country in sending policewomen to the UN missions. SM Tanjil-Ul-Haque features further the brave souls who are hoisting the country flag high in the sky of global peace and security even at the cost of their supreme sacrifices

As the largest contributor of troops to the United Nations (UN) peacekeeping operations, Bangladesh has a long history of participation in the holy mission. The journey began with the deployment of merely 15 military observers to then UN Iran Iraq Military Observer Group (UNIIMOG) operation in 1988. Since its inception, Bangladesh has been working tirelessly at the forefront of UN peacekeeping missions.

As the days passed by, new feathers have been added to the crown of Bangladesh’s success in international peacekeeping, which has placed the country in a new aura of honour and dignity in the world. After the Army started UN peacekeeping journey in 1988, the Navy and Air Force joined the mission in 1993, while the policemen embarked on peacekeeping operation in 1989 through the Namibia Mission. Along with men, Bangladeshi women peacekeepers too participated and signified their qualifications by wearing the ‘blue helmet’ symbol of the peacekeeping force. As a result, the name of Bangladesh comes on top as a country that sends UN peacekeepers.

According to available information published by Bangladesh Army, around 182,000 peacekeepers have performed their duties with highest responsibility in 56 peacekeeping missions across 43 countries so far under the umbrella of the Bangladesh Armed Forces (Army, Air Force, and Navy) and the police. With an enviable experience of over three decades, Bangladesh has aptly taken lead role in peacekeeping missions. At present, 7,144 Bangladeshi peacekeepers comprising the armed forces and police are engaged in the difficult and risky task of establishing peace and harmony in various conflict and war-ravaged regions around the world. Among them, 371 are women peacekeepers who are working as key driving force in reducing gender-based violence and providing women and children with security.

The members of Bangladesh Armed Forces and police on UN missions have brought great honour to the motherland through their sacrifices. A total of 165 Bangladeshi peacekeepers already made supreme sacrifices with 249 more sustaining injuries while on duty in different UN peacekeeping missions around the world. Latest in this case is three Bangladeshi peacekeepers’ death while on duty in the Central African Republic. The three peacekeepers were killed on their way back from UN duty on October 3. The vehicle carrying the Bangladeshis was hit by a car carrying improvised explosive device, and the explosion took place quite unavoidably – thereby throwing the vehicle some 15 feet away and leaving three soldiers dead with another officer wounded. The peacekeepers killed were all from the Bangladesh Army. Those died were soldiers Jahangir Alam, Jashim Uddin and Sharif Hossain; while Patrol Commander Major Ashraful Haque sustained injuries.

The role Bangladesh played in UN peacekeeping is one of pure honour and accomplishment. It is a tale of commitment, sacrifice, and glory for the country, and such a feat was truly hard-earned. There have been many such sacrifices made by the Bangladeshi forces in the UN peacekeeping missions. In the outgoing period of 34 years in the service of global peace, 129 members of the Bangladesh Army lost their lives with four more from the Navy, six from Air Force and 23 from the police. Besides, 249 peacekeepers got injured so far while carrying out their UN duties. Among them, 225 are members of the Army, 6 of the Navy, 6 of the Air Force and 12 are members of the police. Ever since its first deployment, Bangladesh has been contributing steadily to UN peacekeeping missions with such grit, valour and sacrifices.

As a peace-loving nation, Bangladesh’s foreign policy is ‘friendship to all and malice towards none.’ The peacekeepers are working tirelessly to establish peace in conflict-ridden areas in the world at the call of the UN. Bangladeshi peacekeepers are spreading the message of peace in numerous areas by facing various fears and hostile environment. Peacekeepers from the Army are playing an active role in disarmament of conflicting groups, removal of mines, assistance in fair elections, construction of roads and highways and facilities in the mission area. Bangladesh is a bright name in establishing peace and order in places like Congo, Mali, Sudan, South Sudan, Sahara, Lebanon, Haiti, East Timor, Liberia etc. This multifaceted achievement of peace building and conflict resolution is being discussed and cherished by all.

Bangladeshi peacekeeping forces also made an outstanding contribution to the establishment of world humanity. As different countries have different religions, castes, groups; there are different political ideologies. The peacekeepers are ensuring co-existence with all – leaving behind these social differences and economic disparities. The Bangladesh Army conducts its operations with around two hundred armoured personnel carriers, weapons and ammunition and a significant number of vehicles. Bangladesh Navy has two warships Osman and Madhumati always deployed in Lebanon and Mediterranean area for patrolling. They are also seen guarding the inland waterways to ensure the peace and security of the mission area. Bangladesh Air Force BR-130 aircraft, Mi-17 and Bell helicopters are carrying out emergency military equipment transport, rescue operations and relief operations in DR Congo and elsewhere.

Many members of Bangladesh Police are helping the local administrations in the mission area to quell the riots. They are providing emergency medicine to war-torn people in the disturbed areas. Besides, all kinds of facilities are being provided so that the people of these areas can live in peace. Above all, the culture of Bangladesh is peaceful and its people are very polite. The peacekeepers of Bangladesh are also humbly working for the welfare of the people of those countries. The people there are also impressed by the modesty of Bangladeshi peacekeepers. Sierra Leone wants to make Bengali one of the official languages of their nation as they recognised the importance of Bangladeshi troops. The main thoroughfare in Liberia’s capital has been named after Bangladesh. Additionally, a few African nations have established schools using the name of Bangladesh like the Sierra Leone-Bangladesh Friendship School.

Over the course of time, the political landscape of the world has been going through a paradigm shift that contributed to changing the dynamics of peacekeeping operations, adding new challenges like the emergence of non-state actors, violent extremism, disease, pandemic etc. UN peacekeeping is getting harder to do as the world’s expectations and the security environment change. Even under such circumstances, Bangladesh’s beloved sons in UN peacekeeping have left no stone unturned to fulfil their duties with sheer commitment and professionalism.

The participation of Bangladeshi women members as UN peacekeepers is a milestone in the history of the Armed Forces. A total of 519 women are currently deployed in the peacekeeping mission. Among them, 348 are from the Bangladesh Army, 10 from the Navy, 13 from the Air Force and 148 from the police. Many officials in charge of peacekeeping missions along with the UN Secretary-General have greatly appreciated the contribution of women peacekeepers of this country.

They viewed that the Bangladeshi women have set a unique example of female force by actively and significantly participating in peacekeeping missions. Mentioning that Bangladesh is currently the top contributing country in sending police women to UN peacekeeping missions, Bangladesh’s Home Minister said, “Our women peacekeepers are working at the UN as a key driving force in reducing gender-based violence, conflict and fight – especially in providing security for women and children. The honour and dignity of Bangladesh has increased because of this.”

Bangladesh has recently regained its position as the top peacekeeper-sending country. Reclaiming this spot as the top peacekeeping sending country in the birth centenary of the Father of the Nation is undoubtedly an enviable milestone. As Bangladesh remains one of the UN’s most important and reliable partners because of its sustained dedication, compliance to the organisation’s rules and timely actions for adaptation, UN also recognises Bangladeshi peacekeepers’ contribution. All the departed soldiers of Bangladesh received one of the most prestigious ‘Dag Hammarskjöld Medal’ from the UN. In the previous year, eight Bangladeshi peacekeepers won the award, highest from any single country during that year. Recently, ‘Dag Hammarskjold Medal’ awarded posthumously to two Bangladeshi fallen peacekeepers was received by Ambassador Rabab Fatima.

However, the opportunities created for the Bangladesh Army by participating in this kind of international arrangement are many. They will be able to be a direct partner of all policies and technological developments organised due to global progress in the military sector, on the one hand, just as the military personnel engaged in peacekeeping are getting the opportunity to communicate and exchange experience with the military personnel of different countries. This ongoing process is undeniable for any country’s military modernisation. Peacekeeping missions have also created indirect financial benefits for the Bangladeshi economy, particularly in the agricultural and pharmaceutical sectors, thereby creating new markets for Bangladeshi businessmen. Now, the role of the Armed Forces in maintaining world peace needs to be positively evaluated to continue this trend, while also and promote the spirit of the liberation war and peace.