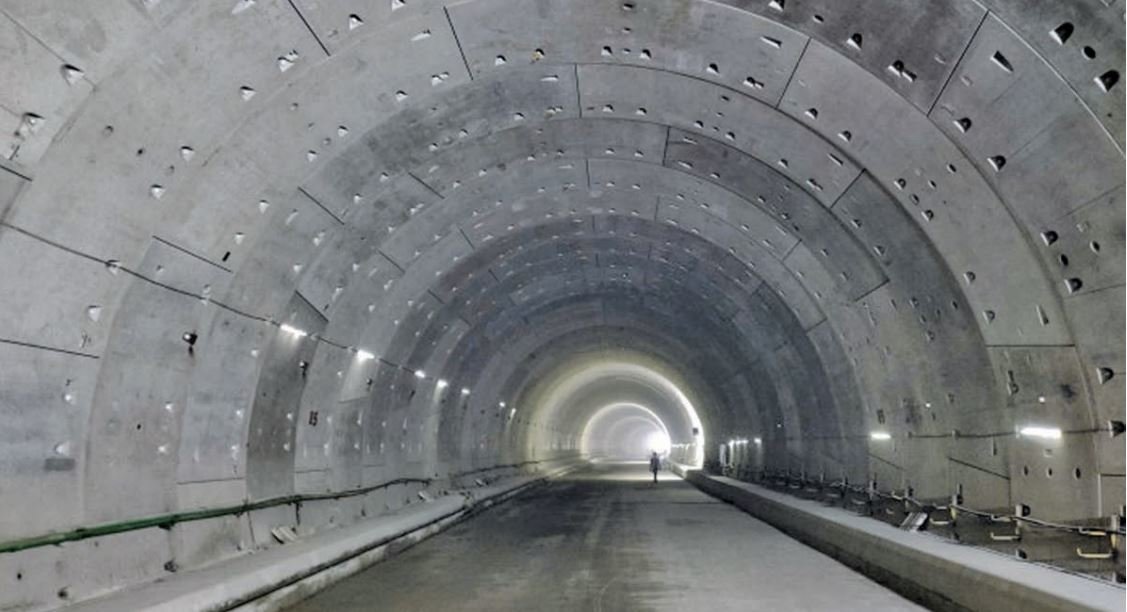 Bangladesh is on its way towards accomplishing yet another dream project with the inauguration of Bangabandhu Sheikh Mujibur Rahman Tunnel, the country’s first underwater expressway named after the Father of the Nation. If all goes well as scheduled, Bangladesh is going to enter its tunnel era this year. Efforts are being made to complete the work of Bangabandhu tunnel sooner rather than later under the Karnaphuli River in Chattogram. Road Transport and Bridges Minister Obaidul Quader has already indicated that the tunnel will be opened to the public in two phases from respective sides of the tunnel’s two tubes. He said, “As the tunnel has two tubes, Prime Minister Sheikh Hasina is expected to inaugurate both tubes of the tunnel.” Project stakeholders, however, expect that the tunnel will be opened for traffic in the last week of November or first week of December. After much fanfare over the ceremonial Padma Bridge opening, Chattogram people as well as the whole countrymen are waiting for yet another round of joy marking the grand opening of the much-talked-about project, which is also the first underwater river-crossing in South Asia.

Bangabandhu Tunnel is being constructed as one of the country’s mega projects underneath the Karnaphuli River with the philosophy of ‘one city-two town’ – thereby connecting Chattogram city and Anwara on both sides. At one end of the tunnel is Chattogram city, airport and seaport; on the other side is the heavy industrial area of ​​Anwara. In the meantime, this tunnel will also connect the two banks of the river with the same thread – similar to Shanghai in China. Jointly financed by Bangladesh government and China Exim Bank, the construction cost of this 3.32–kilometre-long tunnel has been estimated at Tk 10,374 crore.

The Exim Bank of China is giving Tk 5,913 crore at an interest rate of 2 percent, while Bangladesh government is providing the remaining Tk 4,461 crore. Prime Minister Sheikh Hasina and Chinese President Xi Jinping laid the foundation stone of the project in 2016. PM Hasina on 24 February 2019 kicked off the first tunnel tube work. Then on 12 December 2020 Minister Obaidul Quader opened the second tube work.

The opening of Bangabandhu tunnel will create new possibilities in terms of trade and economy in Bangladesh. As a whole, the economy of Chattogram as well as the entire country will enjoy a refreshing boost. A positive vibe will be transpired in various industries – with the country’s thriving tourism industry getting the much-needed fillip. As soon as the tunnel gets fully operational, an average of 17,000 vehicles will move through it every day, and the traffic will increase at the rate of 7.0 percent every year. According to various estimates, an average of 38,000 vehicles will travel daily through the Karnaphuli tunnel in 2030. In 2040, the number will increase to 62,000 and in 2060, an average of 130,000 vehicles will travel through the tunnel each day. This tunnel will facilitate road communication between the deep seaport at Matarbari and Chattogram and with the rest of the country. Businesses expect that not only Anwara and Karnaphuli, but also the entire area stretching from Mirsarai to Cox’s Bazar along the Karnaphuli River will see massive investments following the tunnel opening. Bangladesh Bridges Authority (BBA) says the tunnel will reduce distance between Dhaka and Chattogram by 50km and that between Chattogram and Cox’s Bazar by 15km. It will also ease communication for people living on the south bank of the river to Shah Amanat International Airport in the port city.

In this regard, economist and former professor at Chattogram University Muinul Islam said, “The opening of Bangabandhu tunnel will first lead to industrialisation in South Chattogram and facilitate easy communication between Matarbari Deep Seaport, Chittagong Port, Bay Terminal, and the Mirsarai Economic Zone. But the impact of the tunnel would be more far-reaching.” He added that it would serve as a bridge to build the country’s largest industrial corridor from Mirsarai to Cox’s Bazar. Besides, it will be a significant part of the Asian Highway. At present, goods and passenger vehicles move toward South Chattogram and Cox’s Bazar via Shah Amanat Bridge, Third Karnaphuli Bridge, and Kalurghat Bridge. As soon as the tunnel gets opened, many of the vehicles plying on the Karnaphuli Bridge will use the tunnel instead of the bridge. Industrial cargo vehicles of the mills and factories being set up in South Chattogram will use it too. Traffic congestion, thus, will be reduced to a great extent with the overall traffic reaching much higher.

The road inside the tunnel is already visible. Project sources said Bangabandhu tunnel will have three cross passages – with one of them almost complete, and two others progressing in full swing. Installation of the lane slab of the first tube between the two inside the tunnel has also been completed. Most of the installation work of lane slab in the second tube has got completed too. The safety of the tunnel has been given utmost importance so that saline water cannot go inside the tunnel anyway even during high tide. A ring-road has been constructed at a height of 30 feet above the sea level, which will be connected to the tunnel. The southern end of the tunnel has also been ensured to be watertight during cyclones or high tides. The work of connecting roads on both sides was also at the final stage. The approach road work at both ends of the tunnel was almost finished. Construction of weight scale, toll box was going on unhindered at the Patenga end of the tunnel.

In the meantime, drain and slope protection work was also progressing at different places on the road. The road surface installation was underway after the completion of the lane slab installation in the first tube. Equipment for the communication system, ventilation and other facilities inside the tunnel, although got delayed by the Covid-19 pandemic, were being brought from China. Project Director Harun Ur Rashid Chowdhury said they want to finish the tunnel work sooner rather than later. Hence, he said, the activities were going on for 24 hours with maximum intensity so that no defect emerges in the construction of the tunnel’s internal infrastructure. He also said the process of bringing necessary equipment from China for electrical use was underway. “The tunnel is expected to be opened to traffic by the end of this year as per schedule. Due to the lockdown in China’s Shanghai port, the supply of equipment has been slightly disrupted, which has had a negative impact on the work speed. However, we are overcoming it.”

Bangabandhu Tunnel East Thana will be formed from eastern end of the tunnel i.e. Bairag, Barashat, Raipur and Barauthan Union of Anwara Upazila, while Bangabandhu Tunnel West Police Station will be formed with the City Corporation’s 41 South Patenga Ward. A CMP official associated with the preparation of the proposal said, “Considering the chaotic situation that existed for a few days after the inauguration of the Padma Bridge, it is necessary to give importance to the issue of strengthening security before the tunnel’s inauguration. But the way CMP’s proposals are moving gives impression that it will take some more time. The tunnel work will be completed in the meantime.” Meanwhile, the proposed site for the construction of the police station building in the tunnel area has been abandoned. All these need to be sorted out quickly. Project Director Harun Ur Rashid of the tunnel said, “The issue of construction of structures for the safety of the tunnel is very much in our manual. We are now going through a maintenance period. It will be done whenever we need.”

If the economic activities of Anwara, Bangabandhu Industrial Zone or Matarbari are launched, the whole pressure will be on the Karnaphuli tunnel. “In this situation, there is no alternative to have appropriate planning for fair traffic management,” said Urban Planner Ashiq Imran. The authorities, however, are yet to construct key infrastructures including the approach roads, U-loop, overpass and bypass raising big concerns over traffic management. With the deadline for inauguration approaching fast, a traffic route construction committee gave the Bangladesh Bridges Authority a 28-point recommendations on how to manage traffic on March 3. The committee requested to implement the suggestions without delay. There is fear of a traffic-management catastrophe if the recommendations are not implemented timely, said officials of the departments concerned. Although the tunnel’s construction work was nearing completion, implementing the recommendations in time were still shrouded by sheer uncertainty.

Apart from that, construction work of the two proposed police stations and a Fire Service station were yet to start – thereby raising concerns over the much-needed issue of security. In the set of recommendations, the committee said for uninterrupted vehicular movement of Dhaka-bound vehicles, a flyover can be constructed at the extended portion of the elevated expressway and can get connected to the ‘G-1’ road. For free movement of vehicles going through the Tunnel Approach Road, a U-loop can be constructed above the CDA’s Outer Ring Road to solve all problems related to turning right to move to Lalkhan Bazar and the airport. A flyover needs to be constructed over China Harbour Road and Tunnel Approach Road intersection. A Fire Service station needs to be built at the tunnel area too. To avoid gridlocks during toll collection, an electronic toll management system can be installed.

To sign off, it can be noted that the tunnel requires significant testing before it can open to traffic as there are a number of safety considerations such as the need to constantly pump oxygen. Officials concerned said although the megaproject will be inaugurated by the end of this year, it’s not expected to open for traffic until January next year at the earliest in order to test and ensure that it is safe. Apart from the tunnel, there’re important structures in Anwara, the south side of Karnaphuli River, apart from Chattogram side. There are Korean EPZ, China EPZ, CUFL and Perky Beach. The tunnel will connect Chattogram city with Cox’s Bazar, Banshkhali and Matarbari power plants and Matarbari deep sea port via Karnaphuli-Anwara. The dream project is expected to significantly reduce traffic congestion on both sides of the river, including the northern and southern parts of Chattogram, and shorten travel time significantly while boost the economy too.