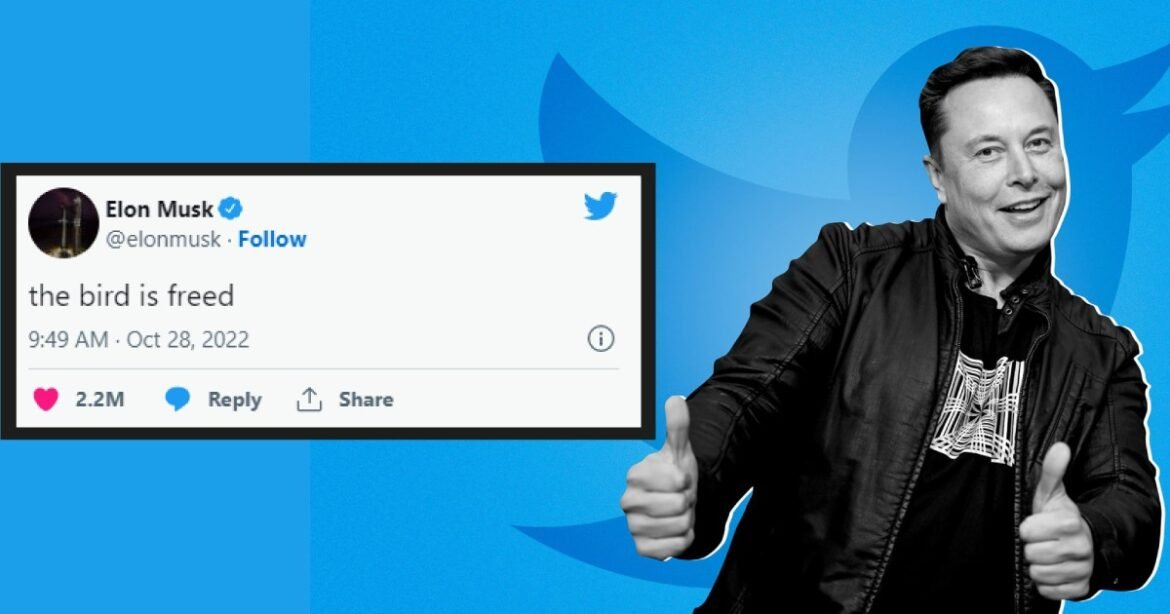 A new era for one of the most important social media platforms in the world began lately when the world’s richest businessman Elon Musk formally acquired Twitter as part of a $44 billion deal on October 27.
Musk has taken control of Twitter Inc with ruthless efficiency – thereby kicking out senior executives. However, he has given no details on how he intends to fulfill the goals he has set for the popular social media site. After completing his acquisition, he wrote, “The bird is freed” – making obvious reference to Twitter’s bird logo and his wish for the firm to have fewer restrictions on what can be written.

Several long-serving top Twitter executives were sacked as one of his first actions, according to people with knowledge of the situation. Chief Executive Parag Agrawal, Chief Financial Officer Ned Segal, and Head of Legal Policy, Trust, and Safety Vijaya Gadde were all fired. One of those informed said the firm’s General Counsel Sean Edgett was also fired.
The top executives were rushed out of the company’s headquarters in San Francisco. Segal reflected on his time with the organization and vowed to continue using the platform actively: “The last 5 years have been the most fulfilling of my career. The people, the potential, and the importance of Twitter. The shifts in technology, politics, culture. This will be hard to beat.”

The self-described enthusiastic advocate of free speech and CEO of the famed electric vehicle Tesla Inc’s manufacturer, Elon Musk, has stated that he wants to stop the platform from turning into a place for hatred and division. Musk has talked about how the company’s outgoing management made bad decisions about products and how they handled content.

Other objectives include attempting to “fight” spam bots on Twitter and making the algorithms used to decide what material is shown to users open to the general public. However, Musk hasn’t provided any information on how he plans to do all of this or who would lead the company. He has declared his intention to eliminate positions, which has Twitter’s 7,500 employees concerned about their future. He also said on Thursday he did not purchase Twitter to increase his earnings but “to try to help humanity, whom I love.”

Former President Donald Trump commended Musk’s acquisition of Twitter. Musk has previously declared that he will lift ban on the ex-president, but as of Friday, Trump had not indicated that he would rejoin the platform. On his new platform, Truth Social, Trump wrote, “I am very happy that Twitter is now in sane hands. Twitter must now work hard to rid itself of all of the bots and fake accounts that have hurt it so badly.”

The closing of the deal put an end to a months-long, up-and-down story in which the world’s richest person tried to buy Twitter at an inflated price through a hostile takeover, then backed out of the deal and got into a bitter legal battle with the social network. Musk has frequently criticised the business and backed online attacks against specific executives. He has informed potential investors and business partners that he wants to turn the company’s finances around by firing nearly 75% of its employees and focusing on new business opportunities, such as getting people to pay for exclusive content from renowned influencers on the service.

Earlier in April, financial disclosures showed that Musk had purchased a stake in Twitter totaling more than 9% of the firm – making him the largest individual stakeholder. This information made Musk’s desire to buy Twitter known to the public. Musk was introduced as the newest board member of Twitter one day later. However, his interactions with senior executives gradually soured.

According to text message conversations revealed in court filings, Chief Executive Agrawal objected to Musk’s April 9 post asking “Is Twitter dying?” Musk explained his strategy in later tweets. In another, he declared, “I’m not joining the board.” “This is a waste of time.”

Instead, Musk made the decision to make Twitter private and gave the board an ultimatum: either let him buy the business or he would launch a competing social media platform. He officially announced a hostile takeover offer, priced it at $54.20 per share. Musk and Twitter reached an agreement about two weeks later. Musk talked about his plans during a stage interview.

On Friday morning, the New York Stock Exchange announced that trading in Twitter shares had been discontinued. This implies that the social media platform is on track to be delisted and will no longer be a publicly traded entity.

Twitter is now owned by Elon Musk – thereby making it the fifth business run by the world’s richest person. Apart from owning Tesla and SpaceX, he also owns SolarCity and Tesla Energy, and Neuralink.

Musk is a different kind of businessman from Jack Dorsey, the co-founder and former CEO of Twitter, or his current competitor Mark Zuckerberg, the CEO of Facebook, who often strive to maintain a rather neutral stance. Musk declared that he would support the Republican Party in the 2022 midterm elections and was considering supporting Florida Governor Ron DeSantis in the 2024 presidential election. He has also expressed opinion on the situations in Ukraine and geopolitical disputes between China and Taiwan.