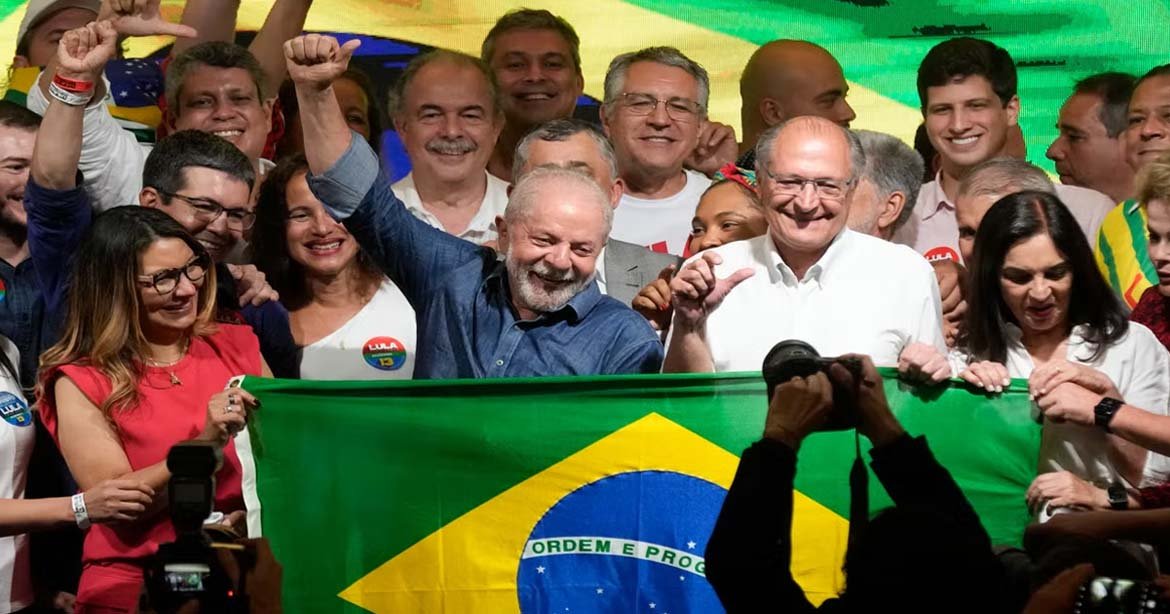 Brazil’s former President Luiz Inacio Lula da Silva made a dramatic comeback by narrowly defeating incumbent President Jair Bolsonaro in a runoff election that brought an end to the country’s most right-wing government in decades.

Brazilians headed to the second round of elections on Sunday after the country’s most polarised election campaign. The Supreme Electoral Court of Brazil pronounced Lula the next president, with 50.9% of the vote to Bolsonaro’s 49.1%. Polls were open from 8 a.m. until 5 p.m. Brazil time. The 77-year-old Lula will be handed over Brazil’s 39th presidency on January 1, 2023. Politicians from all across the world have started congratulating Lula on social media and in formal speeches.

The opponent, Bolsonaro, was a loud Christian nationalist who was criticized for destroying more of the Amazon, messing up Brazil’s response to COVID-19, and making people doubt the country’s voting system. The vote was a rebuke for the ferocious far-right populism of Bolsonaro, who rose from the back of Congress to form a radical conservative alliance but lost popularity as Brazil racked up one of the highest death tolls from the coronavirus pandemic. Bolsonaro didn’t say anything after the results were announced and some of his supporters said he lost. This was surprising because people expected him to challenge the close result right away after making false claims of fraud in previous elections.

Why did the election go to second round?

Brazil’s electorate first cast their ballots on October 2 to select their president, a third of the Federal Senate, all 513 members of the Chamber of Deputies, 27 governors, and state legislatures. However, none of the 11 presidential contenders won a clear majority. This led to the run-off on Sunday between Lula and Bolsonaro, who ended with 48 and 43% of the vote respectively. With a little advantage, Lula won the first round; nonetheless, Bolsonaro’s performance caught everyone off guard. He had been 21 points behind Lula in prior polls, according to the Datafolha polling institute.

Throughout the campaign, false information has been spread on social media and in negative advertisements to Brazilians. Bolsonaro backers have been warning voters that Lula da Silva, if elected, will shut down churches and transform Brazil into a communist state a la Venezuela and Cuba. People have wrongly claimed that Lula intends to allow men to use the restrooms at public schools close to young girls. In response to claims of “pedophilia” and cannibalism, Bolsonaro refuted earlier statements made by the ruling party’s head.

The electoral authorities tried to quiet things down by putting in place some of the strictest limits on campaign speech in decades. The nation’s highest ranking electoral court justices enforced harsh penalties and deadlines for the deletion of misleading online content. Conservatives, however, charged authorities with censorship while many liberals support the efforts of the authorities to impose restrictions.

Lula’s return as next Brazil president

Lula’s return can be deemed as an incredible return for a politician who was barred from running in the 2018 presidential election due to his imprisonment and a court order. He had been found guilty of accepting a bribe from a Brazilian construction company in exchange for contracts with the country’s state-run oil company, Petrobras. Lula was put in jail for 580 days before his conviction was thrown out and he was able to get back into politics. Starting off his victory speech, he stated, “They tried to bury me alive and here I am.”
“I will govern for 215 million Brazilians, and not just for those who voted for me. There are not two Brazils. We are one country, one people, one great nation,” Lula mentioned. The “unity” ticket he put together appears to have worked in his favor and won over voters who might not have otherwise thought about supporting his Workers’ Party.

Is Bolsonaro’s defeat beneficial for Brazil?

If Bolsonaro had won, Brazil would have continued on its current, conservative, pro-business course. Insisting that he is the protector of family values, the 67-year-old president managed to gain the support of a rising number of conservative

evangelicals. But his reputation of destroying amazon made a threat to Brazil and the world’s environment. Researchers say it’s crucial to preserve the world’s largest rainforest to protect Indigenous peoples, a wide variety of animals, and the planet from the effects of climate change brought on by an increase in carbon dioxide. If re-elected, Bolsonaro pledged, he’d continue expanding the mining and agricultural industries and privatise state energy corporations.

Who is Lula da Silva?

Luiz Inácio Lula da Silva, popularly known as Lula, remains a politician from Brazil who served as president during 2003-2011. He was born on 27 October 1945 in Garanhuns, Pernambuco state. A former factory worker, Lula contributed to development of the significant Workers’ Party from a labor union movement. In 1988, his party won handily in So Paulo and other big cities. Although he was a strong candidate for president in 1989, 1994, and 1998 and advocated for measures to support Brazil’s working class, he lost each time to more conservative contenders. But he was triumphant in his campaign for the presidency in 2002. Lula presided over a booming economy and a decline in the poverty rate during his first term. He was reelected in 2006 despite a graft scandal involving party members. Despite the fact that he was constitutionally prohibited from running for a third straight term, his popularity kept rising. Lula was found guilty of corruption in connection with the Petrobras affair in 2017. Following an appeal, he started serving a prison term in April 2018. He was qualified to run for president once more in 2022 after the accusations against him were dropped in March 2021.

In Lula’s victory address delivered in Sao Paulo, he claimed that Brazilian people were the sole winners today. He added, “This isn’t a victory of mine or the Workers’ Party, not the parties that supported me in campaign. It’s the victory of a democratic movement that formed above political parties, personal interests and ideologies so that democracy came out victorious.”

After the divisive election campaign, Lula urged “peace and unity.” During his presidency, he pledged to combat hunger and preserve the Amazonian jungle. “Today we tell the world that Brazil is back. The country is ready to take back its place in the fight against the climate crisis, especially the Amazon.” he added. Lula also emphasized that he will pursue fair global commerce as opposed to trade agreements that “condemn our country to be an eternal exporter of raw materials.”

During Lula da Silva’s term as president (2003–2010), he was able to finance initiatives for the poor that assisted tens of millions of Brazilians in escaping poverty and gained him a sizable and devoted political base. Lula, a 77-year-old former union leader, said he would help Brazil’s most vulnerable people (low-income citizens) again, but he didn’t say how. He also said he would stop illegal deforestation and make a new ministry for Indigenous people. In particular, he has promised to safeguard the environment in the Amazon, where there has been a recent uptick in violence on Indigenous people and a rise in deforestation. After four years under Bolsonaro, Lula had pleaded with Brazilians to elect him in order to “rebuild and transform” the nation. In a speech, Lula pledged to bring the country of Brazil back together and for Brazilians to “put down arms that never should have been taken up.

Lula’s victory in the latest voting marks a significant comeback after he was given a 10-year prison term. However, in his third term, Lula will have to deal with a slow economy, more stringent budgetary restrictions, and a hostile Congress. Additionally, he has pledged to address hunger, a problem that is affecting more than 33 million people in Brazil and has been on the rise. Lifting millions of Brazilians out of poverty was a major factor in Lula’s popularity throughout his first two terms in office. But, in a post-pandemic economy, it will be difficult to find the funds to replicate that feat – especially if he is hindered by an unfriendly Congress.