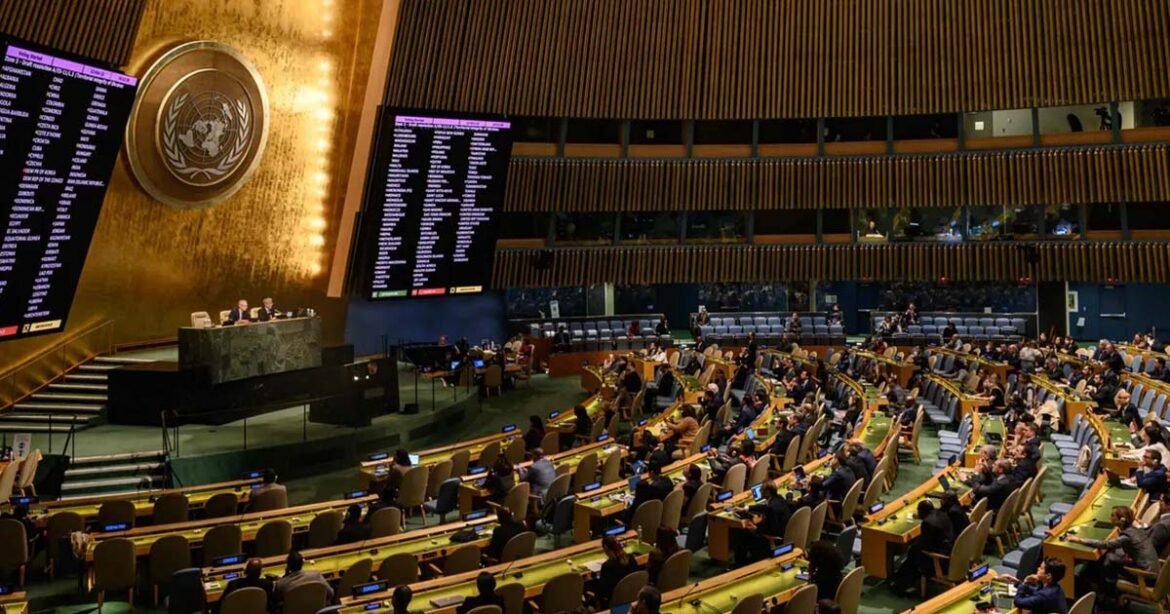 Bangladesh has voted in favour although its South Asian neighbours India and Pakistan abstained from voting as the United Nations General Assembly (UNGA), continuing its emergency special session in New York, has passed a resolution condemning Russian Federation’s attempted illegal annexation of four Ukrainian regions. Passed by a huge margin by the assembly, the UN resolution on late Wednesday also demanded that Russia reverse course on its “attempted illegal annexation.”

The General Assembly automatically appropriated the resolution for debate after Russia’s use of the veto in the Security Council. The results showed 143 Member States in favour, 5 voting against, and 35 abstaining from voting. Bangladesh, who abstained from voting in previous Russia-Ukraine referendums, opted this time to vote in favor of the resolution.
Belarus, North Korea, Nicaragua, Russia, and Syria are the five countries that voted against the resolution. China and India, two major global players, abstained from the vote with others mostly African and former Soviet block countries.

The resolution notes that the regions of Donetsk, Kherson, Luhansk, and Zaporizhzhia are temporarily occupied by Russia which violates Ukraine’s territorial integrity, sovereignty, and political independence. The text of the resolution also proclaims “defending the principals” of the UN Charter.

The debate on the resolution after a procedural vote after Russia wanted a secret ballot on the vote. An Albanian proposal for an open ballot passed with 107 votes in favor, 13 against, and 39 abstentions. The proposal argued that a secret ballot would establish a “dangerous precedent” on a substantive issue of peace and security.

The resolution comes after Russia held self-proclaimed referendums in the four territories, which most in the Western world denounced as “sham”. Russian President Vladimir Putin signed a document to make the eastern Ukrainian regions of Luhansk, Donetsk, Zaporizhzhia, and Kherson part of Russia in a grand ceremony last week.

In a press briefing on Thursday afternoon, State Minister of Foreign Affairs said, “Bangladesh along with 142 other countries voted in favour of the resolution.” He continued that Bangladesh Permanent Representative to the UN M Abdul Muhith gave the explanation of Bangladesh’s position regarding the vote at the UNGA’s special session.

A foreign ministry statement explaining Bangladesh’s decision regarding the vote noted, “We did so because we strongly believe that the purposes and principles of the UN Charter regarding respect for sovereignty and territorial integrity, and peaceful settlement of all disputes must be complied universally for everyone, everywhere under all circumstances, without any exception.”

“In this connection, we specially underscore the need to take similar uniform stand by the international community against the annexations of Palestinian and other Arab lands by Israel,” it continued.

The statement further added, “We believe that antagonism like war or economic sanctions, counter-sanctions cannot bring good to any nation. Dialogue, discussion, and mediation are the best ways to resolve crises and disputes. As a firm believer of multilateralism, Bangladesh will continue to stand with the United Nations and the office of the Secretary General and support them in every way it can.”