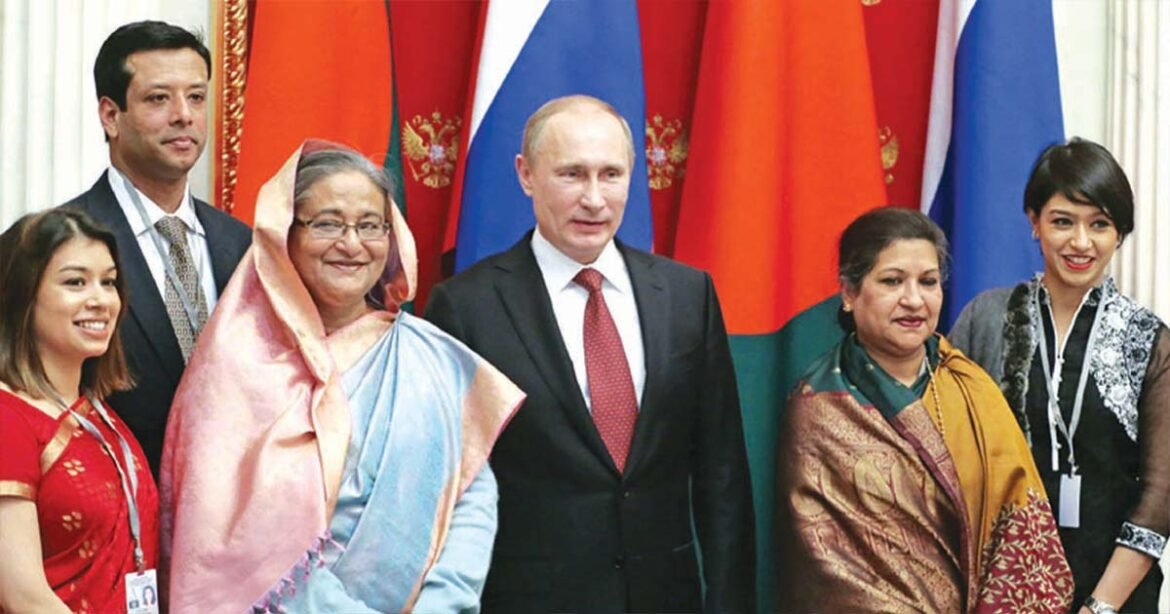 Russia is Bangladesh’s proven and trusted friend. Both the countries are continuously working jointly to grow further. Russia is a major participant in the country’s development stride. With support from Russia, Bangladesh’s first ever nuclear power plant is on the verge of completion. Russia is called Bangladesh’s friend for all seasons. Many expect that under the strong leadership of Prime Minister Sheikh Hasina, the ties will grow further contributing to the development of defence, political, economic and cultural ties between the countries and move towards friendship beyond time, writes journalist BAREK KAISER from MOSCOW

On September 11, one more Russian ship ‘MV ECENIA’ arrived at Mongla port carrying machinery for the Rooppur Nuclear Power Plant (RNPP), which stands tall as the true testimony of a trusted and evergrowing relationship of Bangladesh with Russia. This was the fourth such arrival of a Russian vessel in Bangladesh since the start of the Russia-Ukraine conflict in February. The Russian flag carrier carrying 987 tonnes of different electrical machineries for Bangladesh’s first ever nuclear power plant docked at the port’s jetty-8. After unloading, the machinery from the ship that left Russia on August 17 was taken to the nuclear power plant by road. This, indeed, is a glimpse of the strong bilateral bond between Bangladesh and Russia, and will surely boost the relations which has been in place since the independence of Bangladesh.

YOU CAN ALSO READ: REMITTANCE TO GROW AS MANPOWER EXPORT RISES

The relationship between the countries has a long history. Russia’s contribution during the creation of Bangladesh is undeniable. Bangabandhu Sheikh Mujibur Rahman expressed his sincere gratitude for the tremendous support given by the then Soviet Union to the people of Bangladesh in their struggle for freedom and independence. From there, the new horizon of relations between the newly established

Bangladesh wants to import food and fuel from Russia amid the ongoing global crisis. Russia-Ukraine war has increased the price of fuel oil in the world market. In such a situation, some countries including India, China are buying fuel oil from Russia at a low price. Last May, Russia also offered Bangladesh to buy crude oil from them. The process is on the verge of completion. The process of importing wheat from Russia at the official level is also on the way to finalisation. There was a problem with which currency to buy wheat from Russia, the US dollar or the Russian Ruble. However, after overcoming all the problems, finally five lakh tonnes of wheat are being brought from Russia. Import charges will be paid in dollars. Along with these decisions some key issues were also discussed in the recent meeting between the delegations of the two countries.

Bangladesh did not vote on the resolution that came to the United Nations General Assembly condemning Russia’s military operation in Ukraine on February 25. Explaining this, Foreign Minister AK Abdul Momen said that Bangladesh wanted peace

and is against war, which is why it abstained from voting. He said, “We have talked about the peaceful settlement at the United Nations, as we said, we are deeply concerned. We hope that it can be resolved through peaceful and successful negotiations.” In this regard, Prime Minister Sheikh Hasina said on July 7 that while punishing Russia, it is not right to cause

suffering to all the people of the world. It has also been proven that no country or nation can be controlled by imposing ban. The Prime Minister of Bangladesh also urged the United States and its allies to lift the economic sanctions imposed on Russia, considering the sufferings of people around the world and the economy.

Prime Minister Sheikh Hasina visited Saint Petersburg in 2009 and met the Russian President Vladimir Putin. Bangabandhu’s daughter also went to Moscow in 2013. Bangladesh signed an agreement to buy arms worth about one billion US dollars from Russia. The agreement was reached after a meeting between Sheikh Hasina and Vladimir Putin. The then Foreign Minister, Dipu Moni said Bangladesh bought these weapons with a state loan from Russia. Russian Deputy Defence Minister Alexander Fomin visited Bangladesh last year. He said, “Cooperation between us is gradually increasing, including in the field of military and military-technical cooperation. Russia is ready to strengthen military and militarytechnical cooperation with Bangladesh. We are ready to strengthen and enhance this relationship for the sake of increasing our defence capabilities for the peace of this planet.” Russia is one of the countries that supports the armed forces of Bangladesh with weapons and military equipment. Bangladesh bought Metis-M anti-tank missiles from Russia in 2013. The country bought overall sixteen Yakovlev Yak-130 training aircraft from Russia in 2015 and in 2016. In addition, Bangladesh in 2016 received six Mil Mi-17 helicopters from Russia.

Russia has opened new doors of trade for Bangladesh. Banking facilities are starting soon in both countries. Russia has taken the initiative to provide duty-free market facilities to Bangladesh, including establishing a ware house.

Fruitful discussions were also held on the export of skilled workforce from Bangladesh. Besides, Bangladesh-Russia direct flight will be launched soon. The two countries will jointly organise a trade fair. Russia will help Bangladesh in providing security information and technology. Not only bank transactions, but electricity, energy, trade, science, technical and information technology support, fisheries, training in agriculture, telecommunications, direct air and sea communication, ware houses, and investment growth are also opening up between the two countries.

Bangladesh is Russia’s major trading partner in South Asia with the bilateral trade exceeding 2.5 billion US dollars a year, the Foreign Ministry of the Russian Federation declared this year on the 50th anniversary of diplomatic relations of Bangladesh-Russia. They stated, “Congratulations to our Bangladeshi friends on this milestone anniversary of our relations.” RussiaBangladesh economic and trade relations are based on the 1972 Economic and Technical Cooperation and Trade Agreement. On March 1, 2017, a new agreement was signed between Russia and Bangladesh on establishing an intergovernmental commission on trade, economic, scientific, and technological cooperation. The commission aims to facilitate bilateral trade, economic, scientific, and technological relations between the business people of the two countries and help remove barriers to mutual trade.

In 2019, bilateral trade with Russia amounted to 1.6 billion US dollars. It has reached historic highs. Over 90 percent of Bangladeshi imports to Russia are readymade garments, seafood, and leather items. Russia exports metal rolls, raw materials for the textile industry, machinery equipment, fertilisers, and high-quality milling wheat for crops. Exports from Russia are almost equal to imports from Bangladesh. The Bangladesh Garment Manufacturers and Exporters Association (BGMEA) has requested the Russian government to give Bangladeshi apparel items duty-free access to its market. If Russia gives duty-free market access, it will create a big opportunity for Bangladeshi exporters to explore markets of the Russian-led Eastern European economic union comprising Belarus, Kazakhstan, Armenia and Kyrgyzstan. At the same time, it will also open markets of the Commonwealth of Independent States.

Bangladesh is interested in developing energy cooperation with Russia to reduce the energy deficit. The energy sector is the focal point of bilateral cooperation between our two countries. Russia has been supporting Bangladesh in the energy sector since 1970. The Ghorashal and Siddhirganj power plants built with Soviet assistance still produce about 20 percent of Bangladesh’s total electricity. Russian energy giants like State Corporation ‘Rosatom’ and ‘Gazprom EP’ have actively contributed in implementing the government’s ‘Electrification for All by 2021’ plan.

Using intelligent and safe technology, Rosatom is a proven leader in the international Nuclear Power Plant (NPP) construction market. The construction of Bangladesh’s first nuclear power plant at ‘ Rooppur’ in Pabna, will help achieve energy security through developing the power sector. The project also aims to stabilise electricity prices and reduce Bangladesh’s dependence on high-cost power generation based on imported fuels. The Inter-Governmental Agreement for constructing the Rooppur NPP was signed in November 2011. Russia provides about 12 billion US dollars to Bangladesh for constructing the power plant.

An intergovernmental agreement was signed in Moscow on Russian state allocation for financing the main construction phase of the power plant. The Rooppur NPP will be equipped with two Russian VVER reactors with a minimum capacity of 1200 Megawatt. The VVER-1200 provided by Rosatom is a modern project that complies with international post-Fukushima safety standards and regulations. In addition to constructing the power plant, the Russian side is implementing an extensive training program to train qualified personnel for the nuclear industry in Bangladesh. Every year 20 Bengali students are awarded Russian state scholarships to study at the Moscow Engineering and Physics Institute (MEPHI). They are trained in NPP management by conducting regular workshops on full-scale simulators and real NPPs.

Russia and Bangladesh have a long history of practical cooperation in education. Since 1972, Bangladeshi students have received scholarships under the Soviet Union and Russian State Scholarship Scheme. The Ministry of Education of the Russian Federation awards scholarships to students for Honours, Masters, PhD, Diploma Specialist, and training, including internships. So far, more than 6000 students have completed their studies at various universities in Russia. Now they work in almost all sectors, including public and private organisations and businesses. Russia’s education quality is good in the higher education sector, especially in medical sciences, technology and engineering, nuclear sciences, geology and mining, and energy sector. Bangladesh and Russia are working to sign a new intergovernmental agreement on mutual recognition and equivalence of educational documents and scientific degrees.

Cultural links between Russia and Bengal were established in the eighteenth century. The first Bengali play was staged by Russian dramatist and explorer Gerasim Lebedev. The artist translated an English play called ‘The Disguise’ into Bengali and staged it. Lebedev also established the first European-style Theatre in Bengal with the help of local intellectuals. In addition, Lebedev composed a small Bengali dictionary, wrote a book in Bengali on arithmetic, and translated portions of Ananda Mangal into Russian. In today’s world, cultural diplomacy is emphasised along with economic and political diplomacy. Cultural communication and exchange are essential in strengthening country’s relationships.

The friendship between Dhaka and Moscow will also be strengthened through cultural communication. During Sheikh Hasina’s visit to Moscow, Memorandum of Understanding (MoUs) were signed on collaboration in the field of culture. Under the agreement, Bangladesh celebrated Russian Cultural Day in 2014.

A picture exhibition titled ‘Image of Russia’ was also organised in Dhaka. The performances of the Russian artists enthralled the Bangladeshi audience. Russian artists are overwhelmed by the

love of the Bangladeshi people. And in 2015, Russia celebrated the cultural day of Bangladesh. Bangladeshi artists performed on the main stage of the Maly Theatre in Moscow. Russian artists regularly visit Bangladesh and participate in cultural events, including the Asian Art Biennale.

To wrap up, Bangabandhu began the friendly ties between Russia and Bangladesh. His daughter Prime Minister Sheikh Hasina has taken that friendship further forward. Russia is among the special bracket of Bangladesh’s tested friends. Returning from a visit to Russia in 2013, PM Sheikh Hasina said, “The thing that impressed me the most from landing at the Moscow’s Sheremetyevo Airport until leaving was that people from all walks of life, including President Putin, remember Bangabandhu with reverence. They said the spiritual relations of the Russian government and general people with Bangabandhu had gained immortality.” May the Russia-Bangladesh relationship reach newer heights in the days to come!