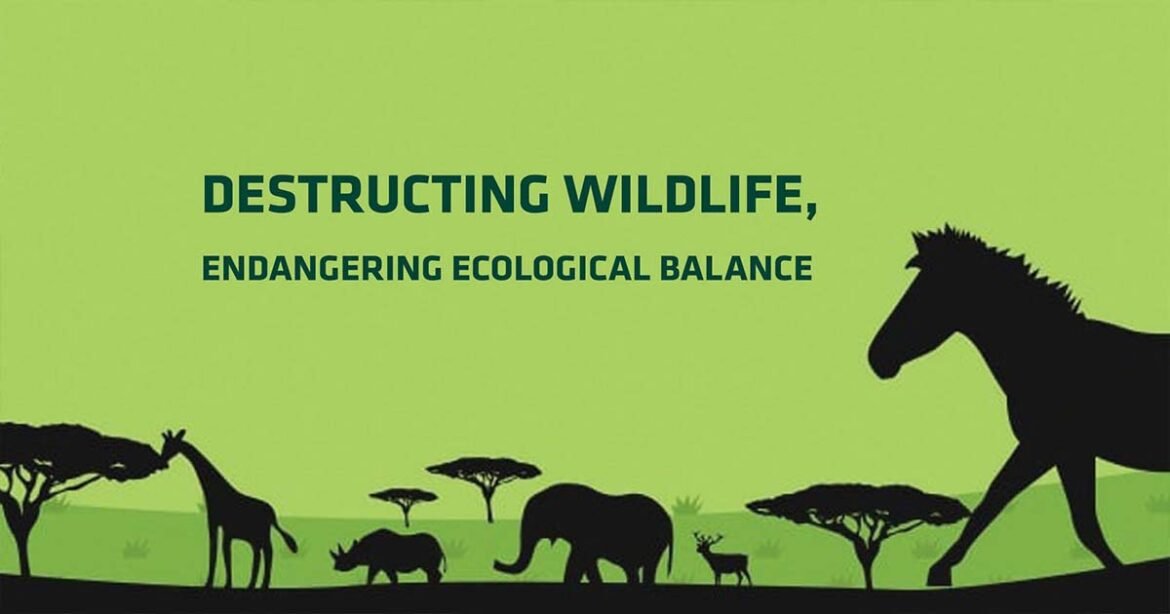 Humans, animals and plants – all are vital elements of the natural environment. However, humans are cruelly destroying plants and animals and thereby creating a danger for all including themselves. Destruction of forests and other habitats are causing extinction of numerous plants and animals every now and then. These losses are particularly severe in areas with tropical forests, which although cover only seven percent of the surface of the globe, but still provide living space for 50 to 80 percent of the world’s wildlife. Wild animals and birds like tigers, bears, alligators, elephants, wolves, eagles, falcons and kites are thus faced with the threat of extinction today.

Many animals die of starvation due to draught, winter and other natural calamities. Their decline has been accelerated by the destruction of their feeding and nesting places, by the collection of their eggs, and above all by the widespread use of chemicals and pesticides which enter their food chains leading to sterility and mass deaths. Hunting of birds and animals is another cause of their extinction.

In fact, indiscriminate killing of animals have already put many animal species to extinction or near extinction. Destruction of their natural habitats add to the misery of the animals forced to leave their dens for unsafe living. Displacement is often accompanied by scarcity of food and enhanced danger of being hunted. These displaced animals are exposed to many new dangers posed by man and other predators. We know that all species are important for maintaining ecological balance. If one is lost, the whole natural environment changes often for worse. In order to protect the environment from being spoilt, we should protect our wildlife. The good news is that many countries are now taking action to protect their endangered species. Conservationists are trying to create awareness among people for wildlife conservation. Scientists are warning of grave consequences and governments are coming up to protect wildlife species. We definitely support the proposition that government of our country should also enact more strict laws to protect its own wildlife.

Many scientists and researchers have studied wildlife extinction and its effects. Animals and other living species are very important for the ecological balance. Animal species maintain a systematic balance in the wilderness, elimination of a number of species from the system may result in the systems atrophy. If we understand why people kill wildlife, we will better understand the issues of conservation. First, wildlife killing was a way of life in most primitive societies. Many agrarian and backward societies still view wildlife as sources of food. Secondly, predator animals are viewed as security threat to people and their livestock. Birds, rodents and other creeping animals often damage their harvest. Thirdly, poachers kill animals to take components from their bodies like; animal skin or elephant tasks in order to sale and get a good amount of money. Bangladesh government has taken some initiative to protect wildlife like making the law over poaching and killing animals stricter. But, a question arises due to the continuation of declining number of animals in the country, will it be enough?

WILL PROTECTING ENDANGERED SPECIES BE ENOUGH?

Only protecting endangered wildlife will not restore the environment, at least in Bangladesh. It is necessary to give importance to various other issues. One of them is short-sighted planning for environmental degradation and pollution, forests, rivers and natural environment.

The United Nations has declared 2021-30 as the Decade of Environmental Protection on World Environment Day 2021. All the while, the countries of the world have to work for a sustainable development. However, there are concerns about the importance Bangladesh attaches to the restoration of the environment and whether the desired goals will be achieved at all. The state and government of Bangladesh have prioritised the conservation of forests, environment and biodiversity in various ways. Even Article 16 (a) of the Constitution promises to preserve and develop the environment and biodiversity. It states that “the state shall preserve and develop the environment for present and future citizens, and shall provide for the protection and preservation of natural resources, biodiversity, wetlands, forests and wildlife.” However, due to the lack of communication and coordination of the concerned sectors, the interests of the forest have been and are being neglected in many ways. Wildlife interests are often overlooked in discussions. If there is a wildlife death or an accident related to it, the media organizations are vocal.

In this context, the road construction project of the Roads and Highways Department through Hazarikhil Wildlife Sanctuary and Baroiyadhala National Park can be mentioned as an example. The implementation was postponed due to strong objections from the Forest Department and the positive role of the media. There are wide-ranging conceptual differences between the planning stage and the various field departments on the importance and necessity of forest environment. Needless to say, the lack of inter-sector coordination is stark. Therefore, the forest department has to work hard to stop the construction of road works, electricity and gas pipelines through other forests including Baroiyadhala National Park. In Gazipur, over a land dispute, although a small amount of land was recovered with the limited manpower of the Forest Department, due to lack of manpower and complexity of litigation, the forest land became degraded in the long run. Therefore, in the context of Bangladesh, there is less opportunity to restore the environment only by protecting endangered wildlife. On this occasion, innumerable forests were evicted. According to the Forest Department, 1, 36,613 acres of protected forest has been forcibly seized, and only 12,214 acres of forest land has been rescued with legal measures. Observing this stats reader can easily guess when this forest land will be rescued and when the forest environment will be restored in it.

Moreover, at different times in different parts of the country, we have seen a number of such instances of lack of coordination around forests and forest resources. Due to such lack of coordination, the elephant habitat in Chattogram, Chattogram Hill Tracts and Cox’s Bazar has been narrowed and its movement has been obstructed by setting up various installations and institutions. It should be mentioned that, 44 elephants have died in Chattogram, Chattogram Hill Tracts and Cox’s Bazar from 2019 to 2021 due to various reasons. The importance of conservation of forests and biodiversity, constitutionally, is not reflected in practice. If this continuity is maintained, it will not only hamper the conservation of forests and biodiversity, but will also make it difficult to achieve broad-based sustainable development goals certainly. The institutional structure and management strategy of forest management in Bangladesh as a British legacy did not change as much as it needed to. Instead, due to the old structure and approach of forest management, the activities of the new structure of wildlife management including forest co-management, especially the Department of Wildlife and Nature Conservation, Wildlife Crime Suppression Units are hanging in the balance.

Regular funding of protected forest co-management structures could have enabled elephant protection teams like in other countries (elephant response teams) or local forest patrol teams (community patrol groups) to play a role in protecting forests and wildlife. Unfortunately the progress of these works is also not promising. There is a need to ensure people’s participation in the protection of wildlife and the environment, there is no scope for restraining people in these activities, and forest laws need to be made people friendly, people’s participation needs to be made conducive. Otherwise, people will destroy the environment, catch the wild cats in their area and report to the forest department. According to the Forest Department, more than 16,000 small and large forest crimes have been committed in Bangladesh during the period 2020-21.

It is vital to plan and invest in the restoration of wildlife habitat. The Chattogram Hill Tracts are part of the Indo-Burma Biodiversity Hotspot, which accounts for about 10 percent of the country’s total area, much of which has already been deforested. In order to restore the environment of hilly forests, it is necessary to undertake extensive forest restoration and regeneration activities in the light of national forest policy and plan keeping in view the ethnographic, cultural heritage and rights of the people of Chattogram Hill Tracts.

In the last two hundred years, the size of the Sundarbans, world’s largest mangrove forest and Bangladesh’s pride, has decreased by almost half. If this continues, this forest will be completely extinct in the next one hundred years. Due to the increasing dependence of humans on the forest, its area is gradually shrinking very fast. Its biodiversity is declining as well with the size of the forest. Two species of amphibians, 14 species of reptiles, 25 species of birds and 5 species of mammals are currently under direct threat, including the Royal Bengal Tiger, which is very important for the ecology of the Sundarbans and for the country. Multiple sanctuaries have been set up in the Sundarbans to conserve biodiversity, but deforestation has not stopped due to lack of manpower and funding.

As a result, the Sundarbans residents and the country’s political, social activists, researchers and scientists need to come forward with a leading role in saving the Sundarbans from dire situation in the future.

The whole Sundarbans river embankment has to be made of hardened concrete in a scientific way. Besides, it is important to plant trees in alleys all over the Sundarbans. Otherwise, in the near future, the destruction of the Sundarbans, the world’s largest delta island and an international standard tourist destination, is bound to disappear.

To conclude, the diversity of Bangladesh’s forests, wildlife and natural environment, and the importance of hilly forests in Bangladesh for building forest cover – the 15th indicator of global development goals. Similarly, keeping all aquatic environments free from pollution, including rivers and seas, is equally important for preserving the environment. At this moment, there is a need for consensus among all government institutions and the people in implementing laws, plans and policies to implement the state’s declared commitment to forests, environment and biodiversity.