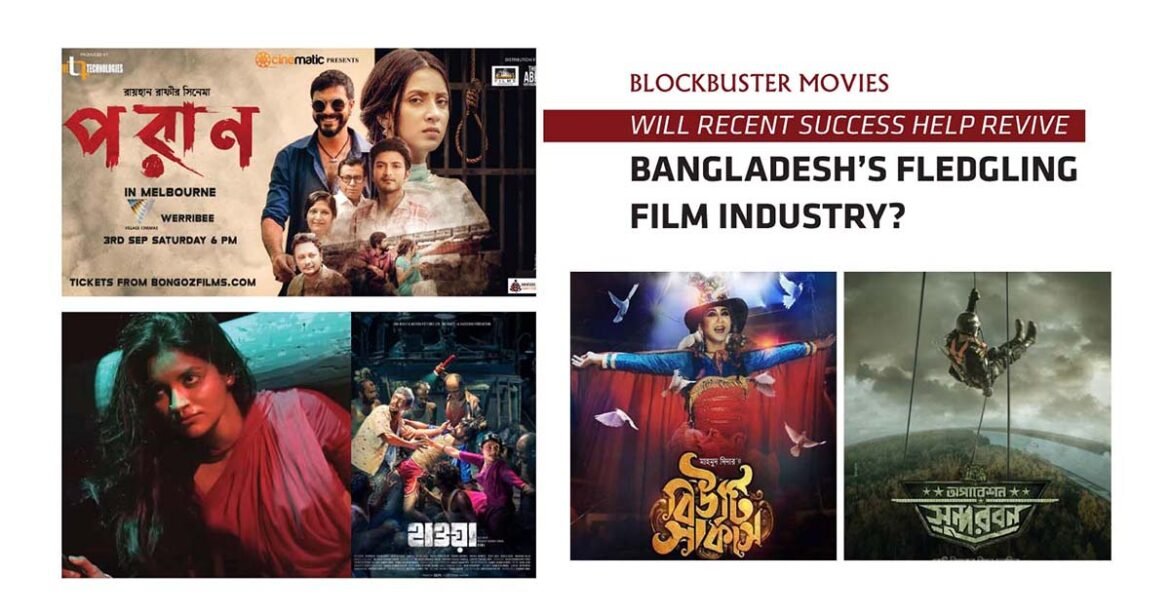 In recent weeks, Bangladesh’s film industry has come under spotlight again and again with a couple of latest blockbuster movies – Hawa and Poran – hogging the headlines for wooing huge audience to movie theatres all across the country and even beyond the border. Only weeks ago, Bangladeshi filmmaker Fakhrul Arefeen Khan’s JK 1971 bagged the Best Historic Film Award at the Mumbai International Film Festival in August. On July 1, Abdullah Mohammad Saad’s film ‘Rehana Maryam Noor’ was screened at the 37th edition of the Valencia International Film Festival–Cinema Jove. In fact, the Azmeri Haque Badhan-starred film made new history for Bangladesh as it became the first Bangladeshi film to feature in the ‘Un Certain Regard’ section of the 74th Cannes International Film Festival, where everyone stood up and gave a standing ovation immediately after screening of the movie. Beyond the border, the celebrated Bangladeshi artiste will soon be seen in renowned Bollywood director Vishal Bhardwaj‘s thriller “Khufiya,” alongside prominent Indian actors Tabu and Ali Fazal.

YOU CAN ALSO READ: CAPACITY ENHANCEMENT KEY AS PASSPORT SERVICES REMAIN IN SHAMBLES

In the last week of September, another feather was added to Hawa’s crown as the film was selected for nomination to the ‘Best International Feature Film’ category of the 95th Academy Awards, by the Oscar Committee Bangladesh. With the latest feat, one can comfortably say the recent months have showed that the scenario of our film industry, which has long been suffering from lack of telling script and overall good work, has changed with wider number of audience. Hence, the Bangladeshi film industry,

which is popularly known as Dhallywood, has been enthused by the new creative work of young filmmakers after ending the drought of unique and well-written script of late. That is why, Dhallywood films are seen to be breathing in a fresh air. That fresh air is blowing outside the country as well. Bangladesh’s most talked-about movie in recent memory ‘Hawa’ has made it to the United States (USA) top chart. Waliullah Sajib, the head of Swapna Scarecrow, the film’s international distributor, claimed this in a Facebook post on September 7. He has noted that ‘Hawa’ has been at number 27 in the US Top Chart in the first four days after its release there. It will undoubtedly be a milestone for the Bangladeshi film industry.

In his post, Sajib wrote, “With the power of business, our movie has entered the world’s number one top chart! Even in the top 30! Sounds pretty incredible, doesn’t it? It took me a long time to believe it. But this incident has happened. A movie in Bangladesh has made this happen.” Di – rector Mejbaur Rahman Sumon has enter – tained the audience with the film ‘Hawa’, telling the life story of fishermen in the Bay of Bengal and blending it with mys – terious black magic. Chanchal Chowdhury, Sariful Razz and Nazifa Tushi’s skilful performance in the film left a mark in the hearts of teeming audience.

Besides, Raihan Rafi has drawn the cine-lovers to theatres with his movie ‘Poran’, which is based on the threeway love story surrounding Noyon Bond, Rifat and Minni, parallel to Barguna’s controversial Rifat Sharif murder. The audience liked the performance of Sariful Razz, Bidya Sinha Mim as well as Nasir Uddin Khan and others in this film. The two young makers of these two films have garnered rave reviews for their sheer efforts while leaving behind their own mark in the two films’ script, screenplay and overall storytelling. Both the movies have spurred hope in the local commercial film industry. In the changed reality, the wider number of audience are seen reappearing in the movie theatres. Additionally, advance tickets are being sold which brought back vibrance in the local movie theatres with the senior artists also joining the chorus of applauding the efforts by the young filmmakers.

Bangladesh’s film industry has been in the doldrums for quite some time. Perhaps, it received the biggest blow during the Covid-19 pandemic. But hall owners are at long last heaving a sigh of relief following their return on investment thanks to these two recent movies with large number of audiences back in theatres – even with family and friends. They are finding a new light of hope as they believe that cinema industry will turn around again if it gets commercially successful films. They are of the view that if commercially-viable good films are produced, cinema halls will depend more on the domestic films rather than the Bollywood or foreign ones.

Theatres will survive, film industry will revive. Buoyed by this mass tide, producers are leaning towards story-driven, innovative films. In this con – tinuation, the theatres and audience are looking forward to a number of next-in-line films including Operation Sundarbans, Damal, JK 1971, Beauty Circus, Live etc.

Hawa and Poran, filmmakers think, have proved that the audience were waiting for good movies. They refrained from going to halls in absence of good movies. They even used to quench their thirst for entertainment by watching foreign movies on various web platforms or theatres in the country and abroad. But if they look for novelty of story and excellent production style in local films, they will come back. Filmmakers like Mejbaur Rahman Sumon and Raihan Rafi have shown how to bring back the audience; how to capture time to tell new stories; and how the movie lovers can be mesmerised by the sheer quality of production – bypassing the budget considerations. On the other hand, Chanchal Chowdhury, Sariful Razz, Nazifa Tushi, Bidya Sinha Mim, Nasir Uddin Khan and a bunch of talented artists made the story of the movies lively through their natural acting. Due to their good teamwork, the recent movies tasted success and highly appreciated by the movie lovers. Now the only hope of these wider audience is the continuation of the good vibe and fresh air, which are currently blowing in the Bangladeshi film industry, in the days to come.