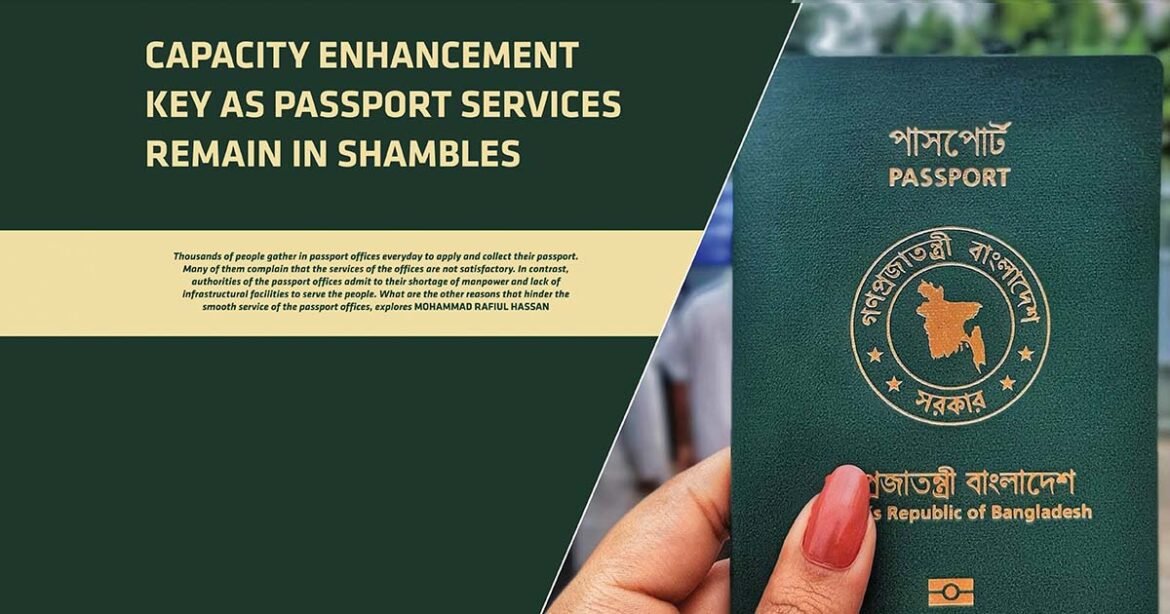 About 10 million expatriate workers work abroad. A large number of people travel abroad for education, business, employment and medical purposes. They need passport to travel abroad. The rate of passporting has also increased in recent years. Even in two years of Corona, a significant number of passports have been issued. According to the statistics of the passport department, the number of MRP and e-passport combined was more than 28 lakh last year. But the manpower did not increase significantly. And so, the passport office officials are struggling in the process of issuing passports, especially in Dhaka.  At present the e-passports are being issued mainly in the country. A large number of applications are submitted in Dhaka. Consequently, sufferings are seen mostly in Dhaka’s three regional offices—Agargaon, Uttara and Jatrabari. The number of citizens who don’t suffer the irony of getting a new passport, correcting or renewing their information are few. Many complain that they do not get their passports within the stipulated time after submitting application despite paying the government-mandated fees. Why is this happening? We may explore further.

SHORTAGE OF INFRASTRUCTURE AND SERVICE PROVIDERS AS OPPOSED TO SERVICE RECIPIENTS

Every day more than 3 thousand people bring applications to the Agargaon passport office in Dhaka. Over a thousand other relatives came with them. The passport office does not have the physical infrastructure and manpower to serve such a large number of beneficiaries. According to an information, it has the capacity to manage 2560 applications daily. As a result, there is a delay in getting the passport in many cases. Despite these problems, authorities say, 2,000 to 2,500 passports are being provided to people every working day. A passport office official said, “there is not enough space to accommodate so many people and to provide services in a timely manner at least 10 more offices are needed in Dhaka alone”.

YOU CAN ALSO READ: PROPAGANDA FROM ABROAD: WHAT SHOULD GOVERNMENT DO?

Also due to slow server speed it takes a lot of time to fill the application form. After that, the passport was supposed to be delivered within 15 to 21 days, but the appointment date was given after a month. In this situation, education, travel, treatment, workplace and important work are getting stuck due to passport complications.

Regarding the complaints, e-passport Project Director Saidur Rahman said in the media, since the rate of coronavirus infection decreased, the passport aspirants, including expatriate workers at the passport office, were overwhelmed. He added, such a complication has arisen due to a large number of applications at once. Besides, this server of passport works on the basis of communication with several servers of national identity card, birth registration certificate, payment. He said that the effect of weakness in all those servers also creates complications in the processing of e-passport.

There are also complaints that many customers are using the same email ID, where no response is received when any email is sent. It has been seen that many fill the passport form from various computer shops in the neighborhood. Mistakes generally occurs there. And the e-mail id of that shop is given in the application. Now a big question is how the tangle of thousands of pending passports will be opened every day. In this case, Mr. Rahman advised the sufferers to come to the passport office and contact the help desk there.

The passport office claims that if there is not enough manpower, this suffering will not reduce soon. About 1,100 people of passport department work in various positions in departmental, regional and high commission offices. A proposal to recruit 1,977 new people in 2018 to speed up the passport office was sent to the Ministry of Home Affairs. It is also proposed to divide the Agargaon office into another regional office to reduce the pressure in it. But no decision has been made on these issues yet.

At present, there are 7 departmental and 62 regional passport offices, according to the website of the Directorate of Passports. Apart from this, 72 Bangladesh missions abroad provide passport services. As an officials from the office rightly said that it is difficult to serve the country’s 160 million people with the current manpower in thsese offices.

One of the major causes of suffering while applying for a passport is incorrect application form. According to the sources concerned, an average of 85 percent of applicants for new passports are found to be wrong. If the application form is not accurate then the passport cannot be issued on time. As the application is submitted, the software blocks about 1500 applications every day due to various mistakes. 10 officers of Uttara’s e-passport office handle thousands of these applications to examine those mistakes. Because of this, more than five hundred applications are pending every day.

It is therefore important to find out the reason why most of the applications have mistakes. Most of those who come to apply for passports are from marginalized communities. They made mistakes while filling the form. In that case, it is important to consider whether the application process can be simplified by learning from the experience of the passport application app.

Mr Saidur Rahman said, he thinks that people’s unawareness is largely responsible for passport complications. The passport process is being automatically blocked for those who have given wrong name spelling, year of birth and other information in the epassport application. In this case, he advised to be careful in giving information.

BUREAUCRATIC RED TAPE DUE TO THE INVOLVEMENT OF SEVERAL OTHER AGENCIES

Old passport holders also have to complete all processes including biometric, police verification in case of information correction. It takes a long time. This complex, bureaucratic and lengthy process also creates opportunities for corruption.

DESPITE HAVING REGIONAL OFFICES, THE CENTRAL PASSPORT OFFICE IS OVERCROWDED

There are 69 passport offices in the country. However, a significant number of people from all over the country come to Dhaka’s Agargaon office to submit applications and collect their passports. As a result, the pressure is very high here. If everyone would go to the passport office of their respective district or area to take this service, then this pressure would be reduced and the quality of service will also increase.

In response to the question why instead of applying in Sylhet, Tanjir Ahmed said, “I am working in Dhaka. Although it takes time, I came to Agargaon to apply for the passport. If I want to apply in Sylhet, I have to take leave from my work. So I am applying here”.

Md. Abdullah Al Mamun, director of the Dhaka Divisional Passport and Visa Office, said a large number of applications are submitted every day. If we want to solve these applications in a timely manner and provide services, more offices are urgently needed in Dhaka alone.

For more than a decade, The Henley & Partners has been publishing research and indices on passports. This index is published on the basis of how many countries can be visited without advance visa with the passport of any country. UK-based organization The Henley & Partners has revealed that Bangladesh ranks 104th in the Strong Passport Index. Now Bangladeshi passport holders can travel to 41 countries without advance visa. According to the information given on the website of Henley and Partners, Bangladesh was ranked 108th in the passport index last year in 2021. According to that, in July this year, the passport of Bangladesh has improved four steps. Maldives tops the list among South Asian countries. The 63rd-ranked country’s passport allows travel to 89 countries without an advance visa. India’s passport ranks 87th among other South Asian countries. Bhutanese passports are at 93rd position and Myanmar passports are at 99th.

According to passport office sources, biometrics is required for every application. Each biometric takes 5 to 15 minutes. As a result the applicant has to stand in a long queue. Many times the applicant does not bring the required documents. Because of this they were sent back. When the applicants came out, they spoke of suffering or complained about the system, he added.

In contrast there are also examples of getting a passport within the stipulated time if the application form is filled and submitted correctly along with the necessary documents. Touhiduzzaman, a resident of Mohammadpur, Dhaka, works in a private company. He himself filled the application form online on June 8 and deposited the money in the bank. Four days after depositing the money, he went to Agargaon passport office in the capital, took a photo and gave his fingerprints. The police report came on July 4. He received his passport on July 6.

Many people resort to brokers to get rid of the delay or suffering in getting passport services. As a result, the complaints about the activities of brokers around the passport office are very old. Again, some of the employees of the passport office often act as brokers. When asked about this, an official said, “I will not say that there is no financial transaction in the case of issuing passports.” One or two of our office assistants take money and make them work as relatives of the applicants. But that number is not high.

Citizens apply for a passport by paying a specified fee. In return, they have been promised to serve them within a certain period of time, which should be protected at any cost. It is necessary for transparency and accountability. Since the wheels of Bangladesh’s economy are driven by expatriate and importexport income, there should not be any suffering and lengthy procedures in the passport service. In order to speed up the passport service to avoid suffering, it is necessary to appoint the necessary manpower along with setting up some new passport office in Dhaka. There is a need to find a way to overcome the bureaucratic and technical hurdles in extending this service. There is also no other option but to decentralize the service. The government should give necessary attention so that citizens get proper passport services.

Qatar to recruit Bangladeshi workers ahead of World...