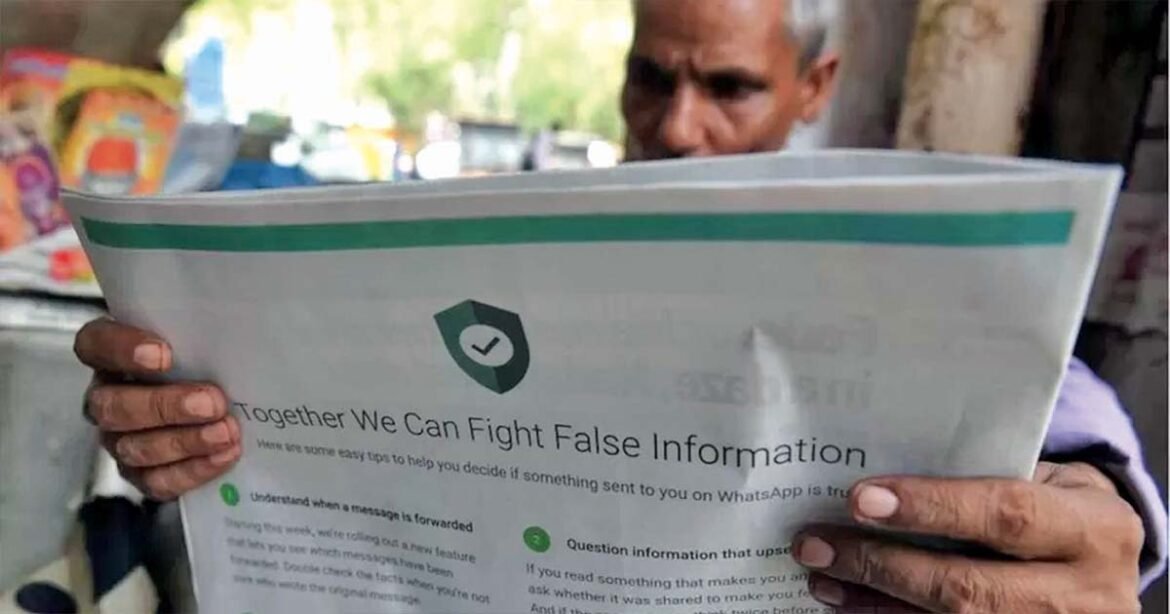 Bangladesh’s High Court (HC) recently ordered the authorities concerned to eradicate all the Facebook posts and YouTube videos consisting fake and concocted news that can incite violence and public disorder in Bangladesh. Applauding such a decision of the High Court, experts term it as a timely initiative, because the country has recently had to be beleaguered in the globe due to the spread of misinformation and false propaganda. Persons or entities engaged in spreading propaganda use all sorts of available technological facilities like press, television, radio, cinema, posters, internet, cell phone, blogs and all forms of social media whenever get indulged in the ill attempt. In this digital age, spreading misinformation or propaganda has become a new concern for any country. False or fake news going viral on any hot topic is nothing new either. In view of the ensuing national elections in Bangladesh, preventing fake news using social media or mass media may turn out to be one of the biggest challenges for the incumbent government.

One such false propaganda against the country on social media has been exposed recently in the Fact Check process of the globally-acclaimed British news agency Reuters, which reported that on August 7, a Twitter account named ‘Wall Street Silver’ posted that there were violent riots in various cities in Bangladesh to protest rise in fuel prices. Along with this, an audiovisual of burning tires on the road and the sound of grenade explosion was uploaded. While verifying the authenticity of the post with more than thousand views, Reuters saw the video clip is actually of nine years ago, that is, the video clip is of the Hefazat-e-Islam movement in Dhaka on May 6 in 2013. Social media users are mistaking the video footage from 2013 for 2022.

The video that was attached with a post reads, ‘Protests and clashes have broken out in several cities in Bangladesh after the government decided to hike petrol prices by 51 percent and diesel prices by 42 percent from midnight. Petrol stations across Bangladesh are seen to be crowded.’ On August 11, Reuters published the revealing report under the title ‘Fact Check: Video does not show 2022 fuel protests in Bangladesh, it dates back to 2013’. Meanwhile, a statement from the Ministry of Information has also been given based on the Reuters report. The statement said, “A false anti-national propaganda carried out on social media has been detected in the fact check process of the popular news agency Reuters.”

It cannot be said that there are no accusations of lying about the complaints and counter-complaints that is a common phenomenon in the political arena of Bangladesh. There is a need to verify the truth and falsity of the accusations made by the opposition party and the ruling party against each other. Since the sudden bankruptcy of Sri Lanka, the propaganda that the situation in Bangladesh will become like Sri Lanka begun. In this regard, experts said those who said Bangladesh will become Sri Lanka, either do not know, or are deliberately spreading misinformation. Our country’s capital account is not open like Sri Lanka, because of which one cannot send foreign currencies abroad without government’s consent.

In case of mega projects, experts say, most of Sri Lanka’s debt is being repaid in a short period of time, under strict conditions, at high interest rates. On the other hand, most of the debts of this country can be paid in long term. Again, most of Sri Lanka’s megaprojects were depended on tourism and their economy took a massive hit during the Covid pandemic. On contrary, mega projects in Bangladesh are mainly economic. Sri Lanka’s debt to national income ratio is 61 percent, while Bangladesh’s debt ratio is 14 percent. Because of these reasons, the report of the World Bank (WB) also stated that Bangladesh will not fall into a situation like Sri Lanka. As a result, the campaigns comparing Bangladesh with Sri Lanka are viewed as disinformation.

WHY IS PROPAGANDA PICKING PACE?

The experts opined that since the 12th National Parliament election is going to be held in between November 2023 and January 2024, various political parties are trying to implement their political agenda by spreading different types of propaganda ahead of the upcoming elections. In many cases, a person or an organisation is trying to mislead the public by convincingly presenting false, half-truths to fulfil its own interests.

Social media has now become a powerful medium of communication due to the creation of Digital Bangladesh. A group is using this medium to spread various propaganda and try to mislead people. Political analysts believe that many are in exile under the current government. Among them is the desire to topple this government and return to the country. So, they are spreading propaganda to trouble the government before the elections.

Analysing the data, it can be seen that basically four media are used most in spreading propaganda

The fake news published through these channels become viral due to users’ likes, comments and shares.

According to the opinion of the analysts, four reasons can be considered as key behind the spread of propaganda:

There are six main ways in which propaganda can be detected;

IMPACT ON THE COUNTRY

The impact of these misinformation or propaganda is very strong on Bangladesh. In addition to the deterioration of the country’s image in the globe. Adverse reactions of the dominant states can also be observed, behind which is the influence of propaganda.

PROPAGANDA BEHIND ALLEGATION OF RIGHTS VIOLATION?

Experts believe that propaganda has acted as a catalyst behind the allegations brought against Bangladesh in the annual human rights report of the United States (USA) this year. Expressing dissatisfaction about the latest US Human Rights report, the State Minister for Foreign Affairs Shahriar Alam, said, “It is a matter of great sadness and regret that for preparing the report, information is largely taken from the propaganda machines that are against the government.” The US human rights report does not just focus on law enforcement. It also mentions how children, and Rohingya immigrants are treated. Analysts find glaring inconsistencies in several aspects of the report. Bangladesh has confirmed humanitarian assistance to the Rohingyas after they fled from Rakhine state in Myanmar. However, analysts believe, the message for showing humanity towards the Rohingyas and above all teaching humanity to Bangladesh by taking the context of signing of the Rohingya charter is completely irrelevant and unwanted. In this regard, State Minister Shahriar said, “Bangladesh has not signed the 1951 Charter on the Status of Refugees and the related 1967 Protocol. Even though Bangladesh is not a signatory country of that protocol, it complies with all its conditions. The explanation why Bangladesh has not signed it has also been given earlier. What is said in this report is wrong and false. It is a moral lapse to teach humanity to the sheltering country regarding the Rohingyas.”

PROPAGANDA BEHIND THE SANCTION ON RAB?

Last year, the US imposed sanctions on Rapid Action Battalion (RAB) and its seven top officials. In this regard, the Foreign Minister said the sanction was imposed without any prior discussion and was prompted through propaganda. He further said that the government has proof that Bangladesh Nationalist Party (BNP), through appointing lobbyists, was linked to the slapping of the sanctions on the elite force. The Prime Minister recently said that relatives of war criminals and killers of the country’s founding president alongside people who fled the country committing various crimes were behind

the anti-state propaganda. Thus, the premier urged Bangladeshi expatriates to present true picture of the country’s unprecedented development under the current government and to give a befitting reply to the propaganda against Bangladesh.

Due to the aforesaid reasons it has become important for Bangladesh to counter the spreading of these misinformation. In view of that, the order given by the HC to remove Facebook posts and YouTube videos containing false information is timely and exemplary. The HC also directed Bangladesh Telecommunication Regulatory Commission (BTRC) and the Digital Security Agency to formulate an accountability mechanism in order to prevent such Facebook posts and YouTube videos containing misinformation that can incite unrest.

The legal notice states that the notice recipients have failed to discharge their statutory duties to regulate, monitor, and remove content from social media platforms infringing the sovereignty, integrity and security of the state. In the legal notice, it is said that in recent past it has been observed that Facebook and YouTube have not applied any supervisory mechanism or control over its contents, especially regarding Bangladesh, while a large number of fake news, content, images, videos damaging the images of various political figures, intellectuals, disclosing various sensitive issues, and tarnishing the image of Bangladesh as a nation. “By using Facebook and YouTube as medium, a number of users both individually as well as groups are spreading rumours and propaganda to embarrass the government,” the notice also declared.

Of late, BTRC reached an agreement with TikTok to remove contents against state and social values. The Memorandum of Understanding (MoU) on this, is in the final stage. In this regard, Minister of Post and Telecommunication Mustafa Jabbar said, “TikTok has said it will follow our laws and regulations. This is a positive thing. The main challenges from our side are controlling misinformation in Facebook, YouTube and TikTok. As a result of the initiative, there is not much to think about TikTok now.” According to BTRC, TikTok is a widely used social medium in Bangladesh. In addition to entertainment contents, various objectionable contents including anti-government, anti-state, sensitive and pornographic contents are posted and shared through various TikTok accounts. In that case, the agreement with TikTok will play an important role in preventing the spread of propaganda, experts believe.

To conclude, under the efficient leadership of Prime Minister Sheikh Hasina, Bangladesh is now a ‘role model’ for the world in every field of socio-economic development including agriculture, education, health, communication, information technology, industry, business and trade. Even in the geopolitical context, the country is playing a vital role. Therefore, it is crucial to take necessary steps against misinformation and propaganda to continue this trend. In this case, the country’s intelligence agencies and foreign offices need to be more active, experts believe. The Foreign Service officials can be given special training in these matters. The state must immediately demonstrate its commitment to continue to work to ensure human rights, accountability and good governance.

Today is the 14th death anniversary of Freedom...