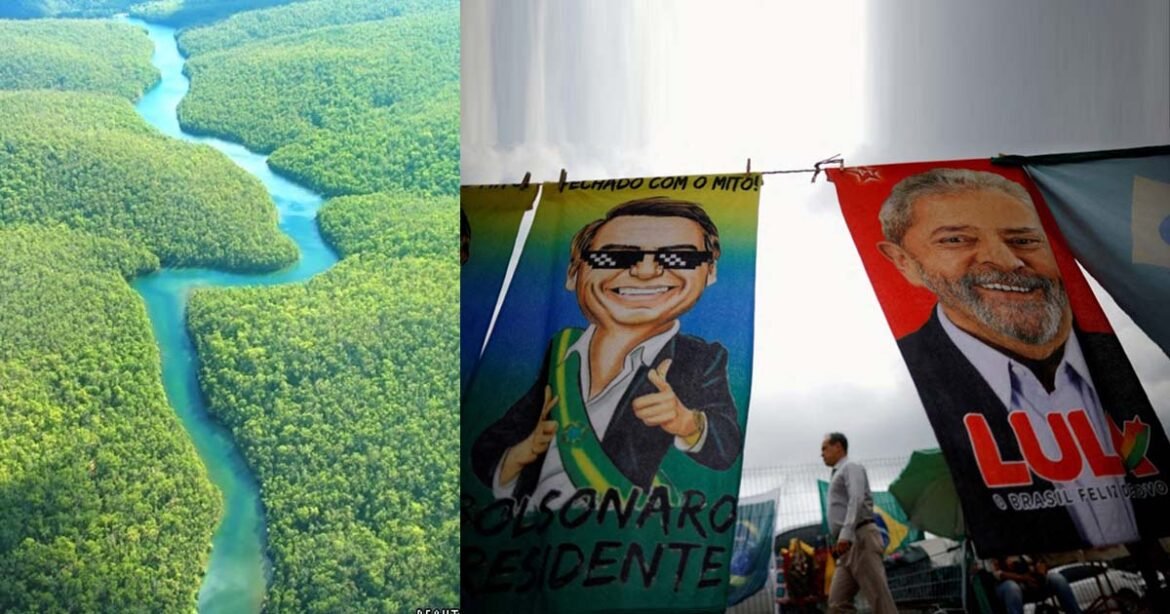 Brazil’s presidential election is for a second round on October 30 as the two presidential candidates – far-right incumbent Jair Bolsonaro and leftist former President Luiz Inácio Lula da Silva – now have to face each other in a runoff vote after neither got enough votes to be elected as the president in Sunday’s first round.

In the runoff vote, left-wing party’s Lula da Silva will face far-right Bolsonaro to see if the country returns a leftist to the helm of the world’s fourth-largest democracy or keeps the far-right incumbent in office. The opinion polls ahead of the election suggested that Lula da Silva would win the first round by a wide margin, but his competitor Bolsonaro proved them wrong by showing unexpected strength. As a result, Lula or Bolsonaro, who will be the next president of Brazil, will be determined by a runoff or second round of voting.

With 99.6% of the votes tallied, Brazil’s former president Lula da Silva had 48.4% support and current president Bolsonaro had 43.2%. But, to be elected as the President of Brazil, the candidates needed to get over 50% of the votes.

The result came as a surprise as it was much closer than expected, since pre-election polls had given Lula a commanding lead. The last survey published by Datafolha on October 1 had found a 36% to 50% advantage for Lula. In this regard, Nara Pavão, teacher at the Federal University of Pernambuco in Brazil, said, “This tight difference between Lula and Bolsonaro wasn’t predicted.”

Speaking at a post-vote press conference, Lula da Silva referred to the scheduled October 30 runoff vote against Bolsonaro as “extra time” in a soccer game. Lula said, “I want to win every election in the first round. But it isn’t always possible.”

On the other hand, Bolsonaro outperformed expectations in Brazil’s southeast region, which includes populous Sao Paulo and Rio de Janeiro states. According to Rafael Cortez, who oversees political risk at a Brazilian consultancy, said, “The pre polls didn’t capture that growth and it’s too soon to go too deep, but this election shows Bolsonaro’s previous victory was not a hiccup.”

Jair Bolsonaro grew up in a lower middle-class family before joining Brazil’s arm force. Bolsonaro turned to politics after being forced out of the military for being forceful to raise servicemen’s pay. During his seven terms as a marginal lawmaker in Congress’ lower house, he regularly expressed nostalgia for the country’s erstwhile two-decade military dictatorship.

Bolsonaro’s administration has been marked by inflammatory speeches, his testing of democratic institutions, his widely criticised handling of the Covid-19 pandemic and the worst deforestation in the Amazon rainforest in 15 years. But he has built a devoted base by preserving conservative values, repulsing political correctness and presenting himself as protecting the nation from leftist policies that he states as ‘invade on personal liberties’. In addition, during his latest tenure, a slow economic recovery has yet to reach the poor, with 33 million Brazilians going hungry despite higher welfare payments. Similar to several of its Latin American neighbours coping with high inflation and a vast number of people excluded from formal employment, Brazil’s people are considering a shift to the political left.

Bolsonaro has constantly questioned the reliability not just of opinion polls, but also of electronic voting machines (EVMs). Analysts fear that he has laid the foundation to reject the results. At one point, Bolsonaro claimed to possess evidence of fraud, but never presented any, even after the electoral authority set a deadline to do so. However, he said recently that if he doesn’t win in the first round, something must be ‘strange.’

Luiz Inácio da Silva, widely known as Lula, founding member of the leftist Workers’ Party, rose from poverty to the presidency and is credited with building an extensive social welfare programme during his 2003 to 2010 tenure that helped lift 10 million poor into the middle class in Brazil. But, he is also remembered for his administration’s involvement in massive corruption scandals that tangled politicians and business executives. Lula’s own persuasions for corruption and money laundering led to 19 months imprisonment, side-lining him from the 2018 presidential race that polls indicated he had been leading against Bolsonaro. The country’s Supreme Court later annulled Lula’s convictions on grounds that the judge was biased and conspired with prosecutors.

Throughout the Lula government, Brazil’s foreign trade record was strengthened and the trade surplus increased, two factors largely responsible for the alleviation of debt and economic growth. Economic growth rose from 1.9% to 5.2%, and Brazil’s trade surplus increased from $13.1 billion to $33.3 billion. With growing exports, Lula had the freedom to fight Brazil’s core poverty and invest in the social programmes.

The two candidates are arch-rivals and have been opponents for a long time. Ahead of this year’s election, they spent much of the campaign trading insults towards each other. In the latest television debate before the vote, Bolsonaro called Lula a thief, in reference to the corruption charges that put him in jail for 580 days before the conviction was annulled. Lula, in turn, has labelled Bolsonaro as a madman and said that he destroyed Brazil. Not surprisingly, that tension has filtered down into the streets. During the nights before the vote, people in Rio could be heard shouting “Lula is a thief” and “Out with Bolsonaro” at each other. Since the two candidates are such polar opposites, much is at stake.

Amazon’s fate hanging in the balance!

Who is going to be the next president of Brazil- former president Lula da Silva or current president Jair Bolsonaro? This is not just a simple question, but the fate of the world’s largest rainforest, the lungs of the world, the Amazon rainforest, depends on it.

In his election campaign, Lula da Silva said that he will strengthen measures to protect the Amazon rainforest, whereas Bolsonaro has argued that parts of the rainforest should be opened up to economic exploitation.

Here to mention, deforestation and forest fires have soared in the Amazon during Bolsonaro’s time in office. Thus, climate activists have warned that if he is re-elected, the area could reach a tipping point. Experts fear that if Bolsonaro wins this election, the destruction of the Amazon may continue and none can save it from reaching its final stage of destruction. On the other hand, former president Lula believes that victory can play a major role in protecting the forest. Because Lula took various steps to protect the forest during his previous tenure.

The Amazon rainforest is known to be a huge reservoir of carbon-dioxide absorption, which plays an important role in combating global climate change. But recent studies have shown that forest fires and logging are emitting more carbon than they absorb. One study found that carbon-dioxide emissions doubled on average in 2019 and 2020 compared to the previous decade; behind which is deforestation through cutting and burning. Another study published in the journal Nature found ‘alarming’ results based on hundreds of air samples collected over the Amazon over the past decade has found that carbon dioxide emissions increased by 122 percent in 2019 and 2020 compared to previous years.

In the report, Brazilian researcher Luciana Gatti said that carbon-dioxide emissions have increased dramatically due to deforestation under president Bolsonaro. Bolsonaro became president in early 2019. According to researchers, since coming to power, he has reduced environmental protections and continued to destroy forests through various measures. According to the latest data, about one million hectares of rainforest were burnt last year and the wildfire reached its highest level in a decade.

According to environmentalists, this is a big risk not only for Brazil, but for the entire planet. Bolsonaro’s legislation promotes impunity for environmental crimes. As researchers showed last March, the Amazon is facing a scenario where global climate change and biodiversity are rapidly disappearing, with profound impacts. The situation is almost the same in 2019 and behind all these are land grabs, beef production, soy production, attempts to extract mining resources, etc., which are accelerating the destruction of the Amazon.

In this regard, World Wide Fund for Nature’s executive director Mike Barrett said, “Amazon has reached a critical and dangerous situation.” On the other hand, Angela Kuczach, director of the National Network for Protected Areas in Brazil, said, “What we are witnessing is the end of the Amazon. Right here in the heart of the Amazon, we are exchanging forests and biodiversity for deserts. We can no longer say we’re going to lose the Amazon in 20 or 30 years; we are losing it right now.”

According to the Amazon rainforest researchers, the trend of land grabs through deforestation in the Amazon is likely to increase with elections in Brazil. “It’s not too much to say that the Amazon’s fate depends on the runoff election and its outcome”, said Adriana Ramos of Instituto Socioambiental, a Brazilian civil society organisation that works to propose solutions to social and environmental issues. Adriana said, “If Bolsonaro wins another term, the survival of the world’s largest rainforest will surely be threatened. If he loses, on the other hand, Brazil will have another chance to save the forest from the brink of destruction.”

She further said that since Bolsonaro became president, the conflict between forest-land grabbers and indigenous peoples has increased sharply, even killings. At the same time, the conflict between forest protectors and forest destroyers has increased. “Those who obstructed their activities – activists or journalists and numerous indigenous people – have all paid the ultimate price,” she said. Amazon deforestation expert Dr Erika Berenguer, in this regard, said, “I don’t say this lightly as a scientist, but for Amazon and its survival, this election is most significant for Brazil.”