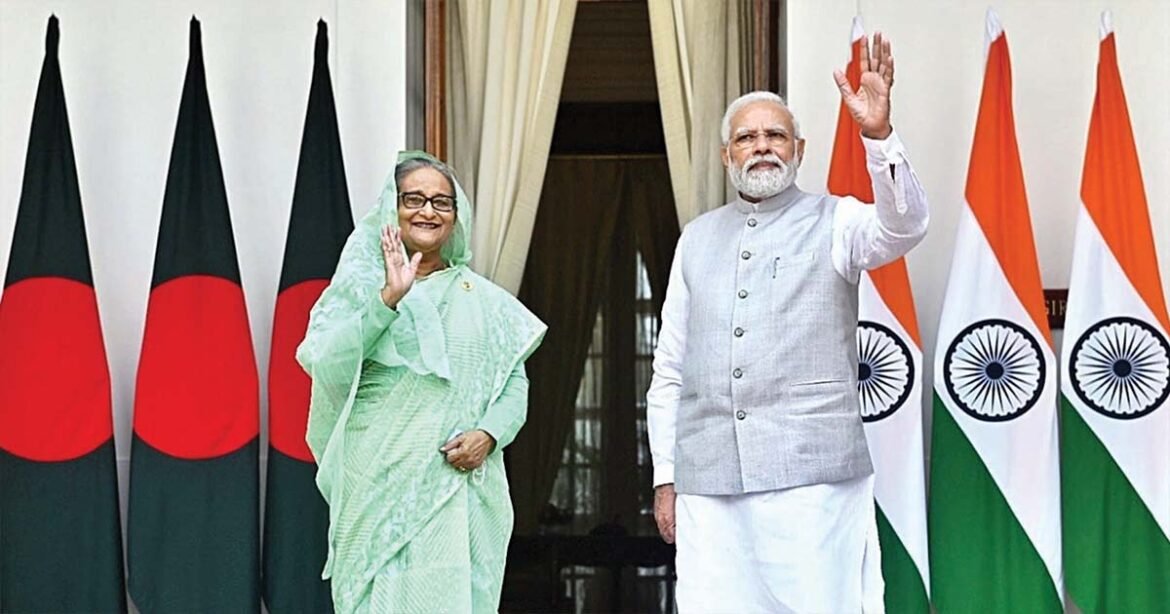 The timing of Prime Minister Sheikh Hasina’s visit to India is immensely significant as both India and Bangladesh will hold parliamentary elections in 2024 and this probably is the last visit at the highest level before the political climate in both countries switches gear and turns to election mode. Any visit to India from Bangladesh at the prime ministerial level always becomes a subject of intense debate, discussion and scrutiny, writes DR DEBJYOTI CHANDA

The much-discussed state visit of Bangladesh Prime Minister Sheikh Hasina to India in the first week of September took place in the backdrop of worldwide economic recession and political and social turmoil engulfing most countries of South Asia. The timing of the visit was also significant as both India and Bangladesh shall hold parliamentary elections in 2024 and this probably is the last visit at the highest level before the political climate in both countries switches gear and turns on to election mode.

Any visit to neighbouring India from Bangladesh at the prime ministerial level becomes a subject of intense debate, discussion and scrutiny in Bangladesh since the country gained independence in 1971. The nation is deeply divided on ideological lines. Whereas the Prime Minister Sheikh Hasina-led ruling Awami League (AL) is considered pro-India, the opposition Khaleda Zia nurtured Bangladesh Nationalist Party (BNP) has run a coalition government with pro-Pakistan and anti-independence Jamaat-e-Islami. Its leadership and cadres publicly runs a virulent diatribe and spew venom against India and continues to remain critical of PM Sheikh Hasina’s pragmatic and balanced foreign policy.

YOU CAN ALSO READ: HOW COSTLY IS IT TO LIVE IN DHAKA?

Consequent upon every sojourn undertaken by Sheikh Hasina to neighbouring India, the common refrain that echoes among bureaucratic and academic circles, corporate boardrooms, newspaper columns, television primetime debates and social media posts is that what has been achieved from this visit? How has Bangladesh gained from this journey?

This is strange indeed because the Prime Minister every year undertakes visits to many countries, far and near, but never such questions arise accept about her visit to neighbouring India. India and Bangladesh are functioning democracies where public opinion plays an important role and questions raised by the mass media need to be given due consideration. It also underlines the fact that India continues to be the focal point in Bangladesh’s domestic politics.

Upon due introspection on the issue of India-Bangladesh relations and the wide spectrum of its ramifications, it may be stated without any inhibition that India and Bangladesh are currently enjoying ‘the golden period’ of its historical bond and partnership and the recent visit of PM Sheikh Hasina at the invitation of Prime Minister Narendra Modi will only help to broaden and deepen this relationship, setting a glorious example of good neighbourliness not only to the domestic audience but also to the regional players and the international community.

Symbolism plays an important role in international affairs today. The September 5-8 visit began and concluded with the PM visiting the shrines of Sufi Saints Nizamuddin Aulia in Delhi and Khwaja Moinuddin Chisti in Ajmer underlying the significance of the age old cultural and religious ties that exists in the Indian sub-continent cutting across political boundaries. As Sufism represents moderation and inclusivity the images of the poignant PM praying at the two shrines that flashed across mass media gave a strong message of peace to all those who have taken recourse to violence and extremism in the name of religion in the South Asian region.

The visit resulted in the signing of seven Memorandum of Understandings (MoU) which reflects the diversity and range of cooperation between the two countries. However, experts opine that this visit, though extremely significant, is just a part of a seamless range of activities that is being implemented by both sides with diligence and care to ensure uninterrupted cooperation resulting in mutual growth and prosperity. During the one-to-one and delegation-level meetings, the two sides discussed the entire gamut of bilateral cooperation including ‘political and security cooperation, defence, border management, trade and connectivity, water resources, power and energy development, cultural and people-to-people links. They also agreed to collaborate in new areas, such as, environment, climate change, cyber security, ICT, space technology, green energy and blue economy.’

It may be noted that Bangladesh is India’s largest development partner with ‘nearly one-fourth of the Government of India’s (GOI) commitment under GOI Line of Credit has been made to Bangladesh. Total contracts have crossed USD 2 billion and disbursements over USD 1 billion. Bilateral trade has grown from USD 9 billion to USD 18 billion in the last five years. Today Bangladesh is India’s 4th largest export destination. With a growth of over 66 percent from USD 9.69 billion in FY 2020-21 to USD 16.15 billion in FY 2021-22. This will further be upscaled in the near future with the beginning of movement of goods to and fro from India through the Chittagong and Mongla ports. India has thoughtfully earmarked certain key areas to disburse development assistance to Bangladesh which is aimed at augmenting critical inputs for Bangladesh’s socio-economic development as a modern, industrialised and inclusive society.

India provides scholarships to Bangladeshi students under ICCR schemes to study in Indian institutes of higher education. In 2019 before the outbreak of the Covid pandemic 13.63 lakh visas were issued. Even in 2021 when the Covid pandemic was raging across the globe 2.8 lakh visas were issued out of which 2.3 lakhs were medical visas. India over the years have become the hub of medical treatment for Bangladeshi nationals where on an average today more than 15 lakh patients are visiting India for availing better medical facilities annually.

As mentioned in the Joint Statement released last June, when the Foreign Ministers of the two countries met that ‘the warmth shared by both sides borne out of shared sacrifices of 1971 Liberation War of Bangladesh, that have developed into close historical friendly relations that transcend the traditional notions of strategic partnership.’

Dr S. Jaishankar India’s Minister for External Affairs who is known to articulate in a measured and dignified way while dealing with sensitive and strategic matters have reiterated many a time that India’s developmental assistance to Bangladesh is not attached to any strings and the relationship is based on mutual trust and respect.

The seven MOUs that were signed during PM Sheikh Hasina’s stay in New Delhi envisage ‘Cooperation in the areas of river water sharing, space, science and technology, broadcasting and capacity building among railway and judicial officials among the two countries.’

India and Bangladesh share 54 trans-boundary rivers. An agreement, the first in 25 years, was reached on the Kushiyara River. However the much awaited agreement on the sharing of water of River Teesta remain elusive till date.

For India apart from trade and commerce, Bangladesh continues to be the closest partner amidst the volatile political and economic scenario in South Asia. Bangladesh continues to help India to maintain peace by containing insurgency in India’s north-east and help in the economic development of the region by providing access to its land and water ports and allowing Indian vessels to use its inland waterways. Cooperation in multilateral fora like United Nations, SAARC, and BIMSTEC are a regular feature.

India’s relation with Bangladesh has a strategic dimension too. Keeping in view China’s ‘ string of pearls strategy aimed at encircling and destabilizing India the latter is in need of dependable friends and allies in the immediate neighbourhood. Afghanistan, Pakistan and Sri Lanka are in shambles. There is turmoil in Myanmar. The state of the economy of Nepal and Bhutan in currently not very healthy. In the circumstances a stable progressive Bangladesh which is neutral in its foreign and economic policies is highly desirable.

Bangladesh on the other hand needs a dependable partner to bolster its economy, hold hand in multilateral fora and talk in its favour in crisis situations as the one currently emerging in the Bangladesh-Myanmar border together with the restive, burgeoning Rohingya refugees currently taken shelter in Bangladeshi soil. As a regional heavyweight Bangladesh expects India to pressurize Myanmar to take back its citizens languishing in refugee camps in Bangladesh for the past five years.

‘Bangladesh needs India’s firm position on the issue not just diplomatic platitudes’ commented an expert on the Rohingya crisis. India which maintains close relations with the Myanmar junta government has agreed to work for the safe and early repatriation of the Rohingyas back to their homeland.

As mentioned in the joint communique regular meetings at the DG and Commander level between BSF and BGB are held to control trafficking of arms, narcotics, cattle and human beings, especially women and children and ensure a peaceful and crime free border. Both India and Bangladesh have also agreed to work towards bringing down the number of deaths due to incidents in the border down to zero.

To wrap up, while many in Dhaka feel that PM Sheikh Hasina’s visit to India was undertaken keeping in view the forthcoming general elections to be held in 2024 and not much significant takeaways have emerged from it. Indian experts however choose to differ underlying the all-weather good neighbourliness that characterize India-Bangladesh relationship which is aimed at forging a lasting bond aimed to build a strategically aligned, economically stable, culturally inclusive, and democratically inclined peaceful and stable South Asian neighbourhood.

HOW COSTLY IS IT TO LIVE IN DHAKA?