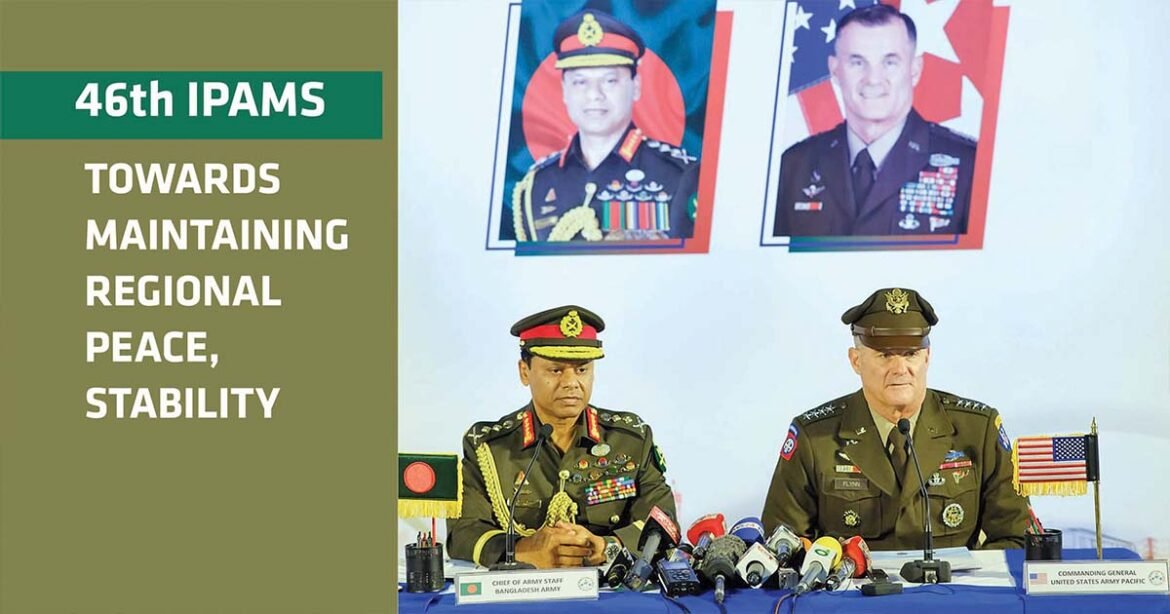 As the largest conference for land forces in the Indo-Pacific region, the Indo-Pacific Armies Management Seminar (IPAMS) is a multi-national platform that provides an opportunity to discuss the region’s security issues. With the IPAMS objective to promote peace and stability in the region through the exchange of ideas of mutual concern and friendship, delegates from 24 nations, headed by senior army officers, came together in Dhaka during September 12-15 to share their ideas, and express concern over the issue of risks and challenges of maintaining peace and security in the region.

The significant security event was jointly organised by the Bangladesh Army and the United States Army Pacific (USARPAC) at a Cox’s Bazar hotel. Resilient peacekeeping, women’s empowerment and regional cooperation were the key topics of the discussion during the three plenary sessions of the 46th IPAMS. The delegation members later visited Rohingya camps in the nearby area. Earlier, Prime Minister Sheikh Hasina opened the event virtually at Radisson Blue Water Garden in Dhaka on September 12 as Chief Guest. Bangladesh, being a key member country, co-hosted the gala event for the third time.

For 46 years, the objective of IPAMS has been to promote peace and stability in the region. In this continuation, the 46th IPAMS, co-hosted by the Bangladesh Army and the US Army Pacific, the largest land force conference in the Indo-Pacific, has come to an end with participants expressing solidarity to work together to maintain continued peace and stability in the region.

The theme of this year’s seminar was “Prospects and Challenges in Maintaining Peace and Security in the Indo-Pacific”, designed with three plenary sessions focusing on resilient peacekeeping, women empowerment, and land power in regional cooperation featuring eminent guest speakers and discussions on the challenges and countermeasures. Refining those bonds and relationships is the trademark of this conference. Delegates from 24 countries, headed by senior military officers, attended the seminar held in the capital from 12th to 15th September, according to a press release of the Inter-Services Public Relation (ISPR).

The representatives of various armies participated in three plenary sessions, working groups, team buildings and conducted lively discussions with an intent to work together, form strong relationships and think outside the box to solve the common issues of this vast and unique region. The seminar’s working group sessions are precisely designed to be challenging and informative while promoting free and open discussion. They also provide a chance to advance our understanding of key issues while showing admiration for each other’s role in upholding security and stability in a free and peaceful Indo-Pacific region.

Chief of Bangladesh Army Staff, General SM Shafiuddin Ahmed said in his closing remarks, “Our journey to peace does not end here. It’s just the beginning. Whatever ideas and views we have developed in this seminar need wider communication for furthering our efforts.” “I believe the friendship of Bangladesh with other countries will increase through the seminar,” he added. Bangladesh army chief also mentioned that by co-hosting the conference, his soldiers always discover opportunities to learn. He said, “If there is a room for improvement, we never leave that opportunity to work together. And this (IPAMS) is a great opportunity to work together and learn from each other.”

WHAT US ARMY PACIFIC CHIEF SAID?

“The fact that 24 nations came together to share ideas, build relationships, and express concerns about the security and prosperity of the world’s most consequential region, sends a powerful message of unity and collective commitment,” US Army Pacific Chief, General Charles A Flynn addressed a closing ceremony audience. In his opening remarks, US General Flynn told the delegation, “We are here today because this community of nations believes in the potential of peace and stability. But, peace and stability only come when we have security in our homelands.

Each of us here today have a responsibility, a mandate from our governments to defend our homeland and to secure our nation’s sovereignty.” Stressing the importance of land force, Flynn said, “Land power is unique. It’s the force that binds together the region’s security architecture. The relationships we build when working together in training, in exercises, exchanges, and conferences like this one, grows the bonds between our nations.” During a press briefing after the ceremony, the US commander said, “It is together that we face the challenges in front of us. It is together that we will continue to solve the security challenges in this region. It is together that we will continue to maintain the peace and stability in this community of nations.”

In addition to the discussions and cooperative activities, delegates were invited to visit one of the many humanitarian camps that are housing the Rohingya refugees in the vicinity of Cox’s Bazar. More than one million Rohingya have been living in many camps in the country for five years, after fleeing their native land Myanmar due to ethnic persecution. Recently, they have been campaigning for a return across the border, but only if security measures are guaranteed. The delegation, including Bangladesh Army Chief and US Army Pacific Region Chief, talked to Rohingya leaders during the visit. The Rohingya refugees expressed their desire to go back to their homeland of Myanmar’s Rakhine state and not to any third country.

“We want to get back our citizenship rights first and then return to our homeland if our safety is guaranteed,” Syed Gullah, a camp-based Rohingya leader said after talks with the army officers. He further added that shifting the Rohingya to any third country is not the real solution. “For our survival as a nation, the only solution is a sustainable repatriation with rights, dignity and safety,” he said, adding that they want to see their next generation being educated and brought up in their own country.

To conclude, with close to 40 nations comprising its domains, the Indo-Pacific region covers more than half of the earth’s surface featuring six of the most populated countries in the world. The region is inclusive of over 3,000 languages and dialects, and poses some of the most pressing security challenges ranging from terrorism, communal violence to natural disasters. Seven of the world’s ten largest armies are in the region where border disputes and sovereignty concerns are headline events. Thus, to maintain peace and stability in the region, this conference can hugely contribute. As is customary to conclude every IPAMS, the conference flag was passed from this year’s host Bangladesh to the next year’s host India. Experts believe that continuation of such conferences is a much-needed phenomenon to keep peace in a vibrant region like the Indo-Pacific.