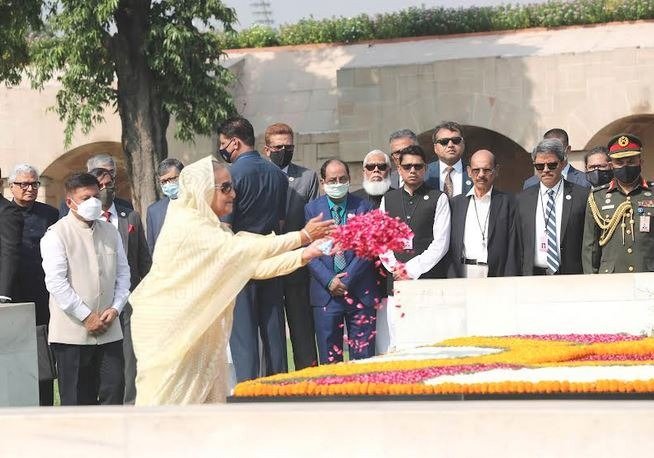 Prime Minister of Bangladesh Sheikh Hasina has paid glowing homage to India’s Father of the Nation Mahatma Gandhi by placing a wreath on his Samadhi at Raj Ghat in New Delhi.

She stood in solemn silence for some time as a mark of profound respect to the memory of Mahatma Gandhi Tuesday morning. The premier also signed the visitors’ book kept in the memorial.

The secretary of the memorial presented a gift to the Bangladesh premier at that time. PM’s Press Secretary Ihsanul Karim confirmed this to state news agency BSS.

During the meeting, Dr. Jaishankar mentioned that New Delhi is keeping an eye on the recent unrest in Myanmar’s Rakhine state. Jaishankar said this in the context of Dhaka’s apprehension about whether the Rohingya repatriation process will be hindered as a result of the conflict between the government forces and the rebels in Rakhine. He commented that the situation in Myanmar’s Rakhine state is not good for anyone.

Earlier, the much-awaited state visit of Bangladesh Prime Minister Sheikh Hasina to India, which is taking place after a gap of three years, began Monday morning (September 5) on a high note with New Delhi rolling out the red carpet to welcome the visiting dignitary. India’s Foreign Minister Dr. S. Jaishankar was the first to call on Sheikh Hasina and convey the good wishes of the Government and the people of India upon her arrival. The formal welcome ceremony, however, has taken place today in the forecourt of the Rashtrapati Bhavan in the presence of Prime Minister Narendra Modi, his cabinet colleagues and high ranking civil and military officials.

PM Sheikh Hasina also visited the tomb of Sufi Saint Nizamuddin Aulia to offer prayers Monday evening. She was a frequent visitor to this place during her long exile in Delhi immediately after the assassination of her father Sheikh Mujibur Rahman to seek blessings and peace of mind. A 170- member huge entourage is accompanying the visiting Prime Minister, which includes 8 ministers, advisors, senior bureaucrats and prominent business magnets of Bangladesh.

With general elections slated in both India and Bangladesh in the year 2024, both sides are eager to reap maximum benefits from this visit which shall probably be the last high level visit from Bangladesh after which the country shall obviously go into election mode. Opposition Bangladesh Nationalist Party (BNP) and ultra-right wing forces are watching this visit closely hence the ruling Awami League is leaving no stone unturned to make this visit a success.

Apart from cooperation in communication infrastructure, energy and food security, IT, water sharing and agreement on Comprehensive Economic Partnership, experts are eager to see if any agreement is signed on defence and strategic areas.

The sudden last minute withdrawal of Dr. AK Abdul Momen Minister for Foreign Affairs, who many say is uncomfortably close to China, from the entourage has raised eyebrows on both sides of the border and the probable cause of it is being debated.

However, as per informed sources, West Bengal Chief Minister Mamata Banerjee will not remain present in New Delhi to meet Sheikh Hasina, although the latter had expressed her desire to meet her to discuss matters of mutual concern. It may be recalled that the much-awaited Teesta Agreement did not fructify due to strong opposition posed by Banerjee on the issue.

In between her visit to the tomb of the Sufi saint and dinner at the Bangladesh Embassy in New Delhi, which was her last engagement on the first day, Sheikh Hasina met Adani, the Indian business tycoon, who is currently the third richest man in the world. Observers of India consider Prime Minister Sheikh Hasina’s private meeting with Gautam Adani to be very significant.

Is Europe’s economy heading towards recession?