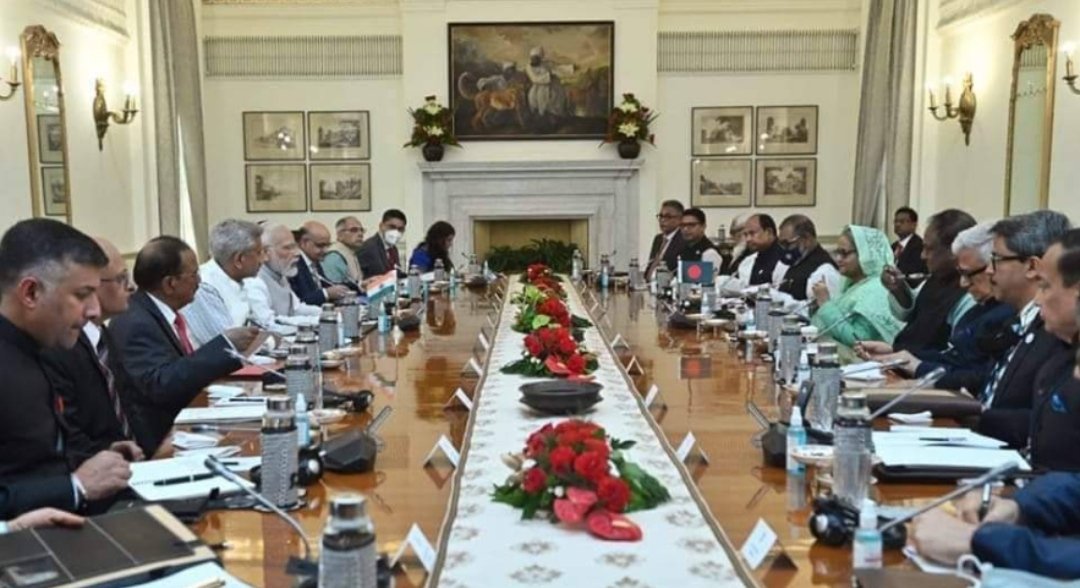 Bangladesh and India have enjoyed productive talks on the second day of Prime Minister Sheikh Hasina’s India visit. The Bangladesh Premier today (September 6) held bilateral meeting with her Indian counterpart Narendra Modi in New Delhi before having a joint statement. The two leaders jointly inaugurated the 5.13 kilometre-long Rupsha rail bridge, which is a key part of the 64.7 km Khulna-Mongla Port broad gauge rail project. They also unveiled the Unit-I of Maitree Power Plant, a 1320 (660×2) MW super critical coal-fired thermal power plant at Rampal of Khulna. Earlier, a total of seven MoUs were signed in New Delhi in the presence of the Prime Ministers of the two neighbouring countries. The signed MoUs included the followings:

• MoU signed for extraction of 153 cusec water from Kushiyara River in Bangladesh under Surma- Kushiyara project.

• The National Judicial Academy in Bhopal, India and the Supreme Court of Bangladesh have signed a memorandum of understanding.

• A memorandum of understanding has been signed between Prasar Bharati and Bangladesh Television.

• MoU signed between both countries to promote cooperation in space technology and scientific and research collaboration.

At the beginning of the programme on the second day of Sheikh Hasina’s visit to India, she was formally welcomed through a Guard of Honour at the Rashtrapati Bhavan of India in the morning. Indian Prime Minister Narendra Modi welcomed her there. After the ceremony, Sheikh Hasina paid her respects to Mahatma Gandhi at Rajghat Gandhi Mausoleum. After that, the Prime Ministers of the two countries held a bilateral meeting, following which they held a press conference. In honour of the visiting Bangladesh PM, the Indian Premier later hosted a luncheon.

In the evening, PM Sheikh Hasina had two more significant meetings with Indian President Draupadi Murmu and Vice-President Jagdeep Dhankar. During the meetings, they talked about matters of mutual concern and discussed ways and means to strengthen India-Bangladesh relations further. Leader of Indian Congress Rahul Gandhi also called on Sheikh Hasina to pay his regards to the visiting Prime Minister. They recalled the close bond of the Sheikh and Gandhi families and the glorious role played by Ms Indira Gandhi during the Liberation War of Bangladesh.

What Did Bangladesh PM Say?

Prime Minister Sheikh Hasina called the bilateral relations between Bangladesh-India role model for neighbourhood diplomacy. Sheikh Hasina said in the Rashtrapati Bhavan, “India is a friend of Bangladesh. Both countries are helping each other. Any problem can be solved through friendship and mutual understanding.” Sheikh Hasina also hoped that all the outstanding issues, including Teesta Water Sharing Treaty, will be resolved soon likewise many issues solved in the spirit of friendship and cooperation. She noted that over the last decade, both countries have achieved remarkable progress in a number of areas. “The two countries had resolved many outstanding issues in the spirit of friendship and cooperation and we expressed hope for all outstanding issues, including the signing of the Teesta Water Sharing Treaty at an early date,” she added.

What Did Indian PM Say?

Indian Prime Minister Narendra Modi, on the other hand, has said that Bangladesh is India’s largest development partner and the largest regional trade partner. He mentioned that India will begin talks on a Comprehensive Economic Partnership Agreement (CEPA) with Bangladesh. Modi said, “Trade between India-Bangladesh is increasing rapidly. We have decided to extend cooperation in the IT, Space and Nuclear sectors. Talks are also underway between India and Bangladesh on power transmission lines.” Regarding cooperation between the two nations, Modi said the two countries will together face the forces adversarial to them. “We have extended our cooperation on flood mitigation. We have been sharing real-time data regarding floods with Bangladesh and have also discussed terrorism. It’s imperative that we together face the forces that are adversarial to us,” he added.