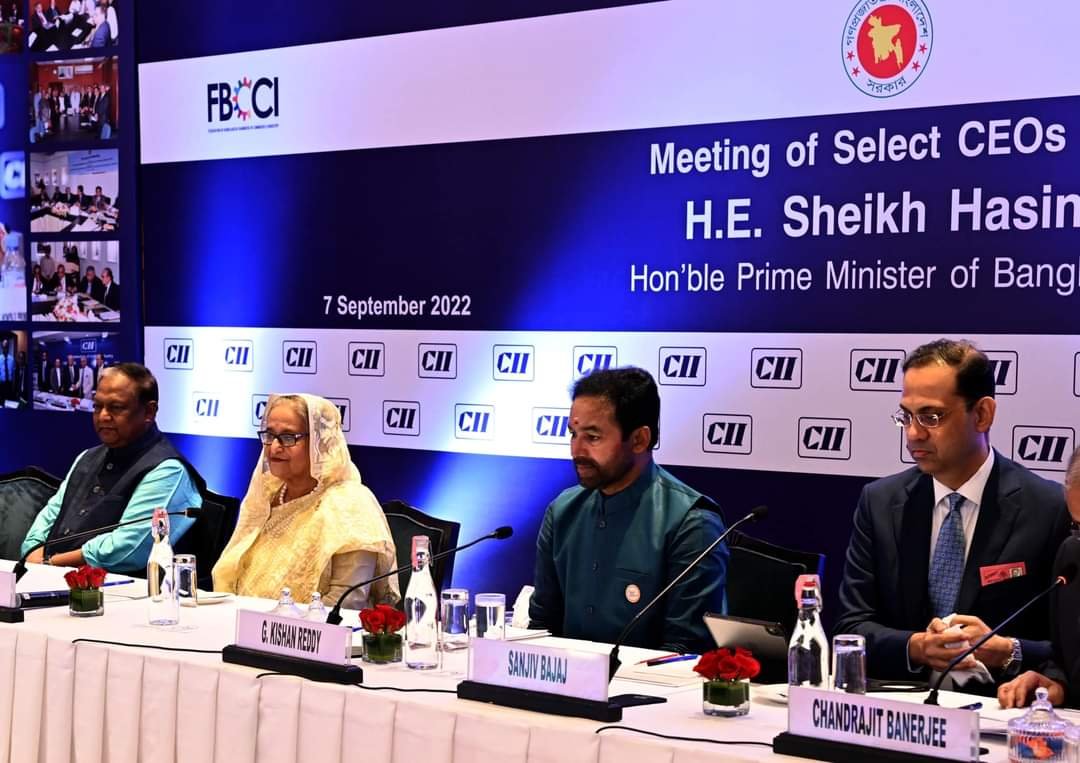 India has offered Bangladesh free transit for its exports to third countries as Prime Minister Sheikh Hasina and her Indian counterpart Narendra Modi reiterated their firm commitment to further strengthen the bilateral ties. In this regard, the Indian side has invited the business community of Bangladesh to use its port infrastructure for transhipment to third countries.

“India has offered free transit via its territory to Bangladesh for exporting its products to third countries through specified Land Customs Stations, Airports, Seaports,” according to a joint statement issued on September 7.

Mentioning that India has also been providing free transit to Bangladesh for exporting its products to Nepal and Bhutan, it said that Bangladesh also requested rail connectivity with Bhutan through the newly inaugurated Chilahati–Haldibari route, and India agreed to consider the request, based on its viability and feasibility. The two leaders also agreed to expedite efforts to improve bilateral and sub-regional connectivity through early operationalisation of the BBIN Motor Vehicle Agreement.

Meanwhile, Prime Minister Sheikh Hasina has described Bangladesh as the most liberal country for investment. She urged Indian investors to invest in the country’s infrastructure, industries, energy, and transport sectors.

Prime Minister Sheikh Hasina, who is on a state visit to India, made the call at a high-level business event at Hotel ITC Maurya in New Delhi on September 7. Federation of Bangladesh Chambers of Commerce and Industry (FBCCI) and Confederation of Indian Industry (CII) jointly organised the event.

The Prime Minister said, “I would urge Indian investors to consider potential investments in infrastructure, projects, industries, energy, and transport sectors. Indian investors and businesses can set up industries in Bangladesh through a buy-back arrangement with less time, cost-effectiveness and assurance of sale of products produced with less resources.”

Bangladesh has one of the most liberal investment regimes in the region, with a wide range of facilities, attractive incentive policies and opportunities for continuous reform processes, she noted.

The Premier said, “This will pave the way for the two friendly countries to leverage their goodwill and bring economic prosperity to the region. Due to the geographically advantageous location of Bangladesh, Indian investors will be able to export their products not only to the North-Eastern states of India, but also to Nepal, Bhutan and South-East Asian countries.” She also said, “It is time for the Indian business community to focus more on Bangladesh and take advantage of its economic growth, low cost and large consumer base. They have implemented mega projects to accelerate the growth of the industry and take full advantage of our strategic location.”

Pointing out that Bangladesh and India have the best relationship, the Prime Minister said that the relationship between the two neighbouring countries is known as a role model of neighbourly diplomacy. Bangladesh is India’s most important development and trade partner. The largest number of tourists and patients come to India from Bangladesh for treatment.

In this context, Sheikh Hasina said that thousands of Indian citizens are now working in Bangladesh. They are contributing to the economy of both countries. She finally hoped that the bonds of deep friendship existing between Bangladesh and India will continue to grow and flourish.

Focus on energy as Brunei Sultan visits Dhaka next month

FBI’S TRUMP HOUSE RAID IS IT ABOUT STATE SECURITY OR POLITICAL HARASSMENT?