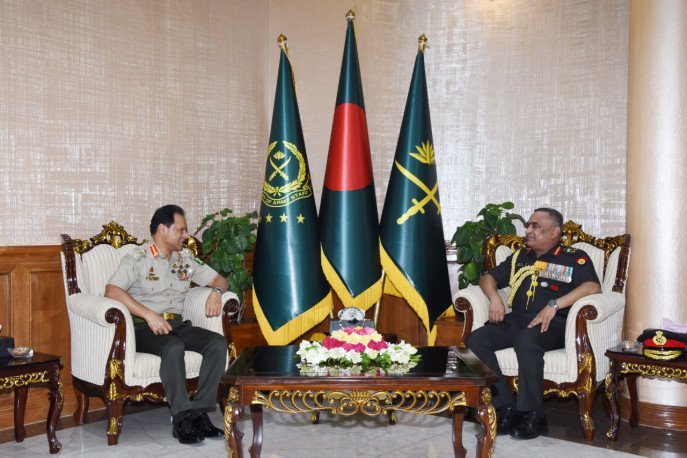 To further strengthen the already ‘outstanding’ defence and bilateral relations between the Bangladesh and India armies, Indian Chief of Army Staff General Manoj Pande recently visited Dhaka. The Indian Army Chief’s visit, from July 18 to July 21, was made at the invitation of his Bangladeshi counterpart General SM Shafiuddin Ahmed. It was the first foreign trip of General Pande since taking charge in May this year. On the first day of his visit, the Indian Army Chief laid a wreath at Shikha Anirban to honour the gallant souls who made the ultimate sacrifice during the Liberation War of 1971. Afterwards, the Indian Army Chief received a Guard of Honour at the convention centre of Bangladesh Armed Forces. General Manoj Pande later paid a courtesy call on Bangladesh’s Army Chief General SM Shafiuddin Ahmed at the Army Headquarters in Dhaka where they discussed ways to enhance and strengthen bilateral defence cooperation. During the visit, Indian Army Chief also met Bangladesh Navy Chief, Admiral M Shaheen Iqbal. He then called on Prime Minister Sheikh Hasina at her official residence where she appreciatively recalled the crucial role of the Indian government, the armed forces, and the people during the time of Liberation War.

Bangladesh and India are time-tested and genuine strategic friends. Since the independence of Bangladesh, both the countries shared many official visits. There are now regular reciprocal visits by the leaders of their governments and armed forces in recent times. The latest visit of Indian Army Chief is a testimony to the high priority that both countries attach to each other and their desire to further strengthen this relationship based on shared values, mutual trust, and understanding. In addition, as it is the first foreign visit of the Indian Army Chief, it showcases the depth of friendship between the countries.

In South Asia, being friendly neighbours, Bangladesh and India are important allies and genuine strategic friends. The two nations work closely together on various fronts like climate change, counter-terrorism, and regional security and trade. Both India and Bangladesh are essential to the South-Asian region. Despite some bilateral issues, both countries are greatly interested in further solidifying their bilateral ties, which was made clear by the visit of Indian Army Chief to Dhaka. The visit also clarified some unsorted issues and viewpoints of both nations are exchanged. Additionally, this visit will serve to cement the bilateral ties between the nations and boost regional cooperation.

It is worth mentioning that India’s relationship with Bangladesh is one of the main pillars of the country’s ‘Neighbourhood First’ policy. Comprehensibly, Bangladesh is key to India’s land links eastwards. When Prime Minister Sheikh Hasina came to power in 2009, she undertook zero-tolerance policy against extremism, terrorism and militancy. Consequently, India’s security concerns regarding seven sisters had been addressed significantly by Bangladesh. Former DG of the Indian National Security Guard said recently that the security challenges India faced in its north-eastern region have been controlled and managed, thanks to the enormous assistance Bangladesh has provided. The top level military visit will fortify the growing Indo-Bangla relations.

THE RECENT TREND OF MILITARY TIES

Bangladesh and India are the most outstanding strategic military partners from a security standpoint. Defence cooperation between the countries has seen significant progress in the last few years. This push is demonstrated in the exchange of visits between leaders of the two nations, as well as the conduct of training programmes, joint exercises, and humanitarian assistance and disaster relief. The Bangladeshi and Indian militaries are increasingly collaborating on defence. Through a variety of initiatives, such as joint drills and defence discussions, the two countries’ armed forces have been working together more and more. The defence services of both countries are now often participating in joint exercises, medical assistance, and training programmes. SAMPRITI, the joint military exercise operation to counter terrorism completed its 10th edition at Jashore Military Station on June 16 this year. The exercise provided an opportunity for the contingents from both Armies to understand each other’s tactical drills and operational techniques as well as to share their experience in countering insurgency and terrorism, peace keeping, and disaster relief operation under the United Nations mandate.

As the Bay of Bengal regions are prone to cross-border organised crimes such as human trafficking, fake currency distribution, arms and narcotics smuggling; a high level of cooperation between the security forces can help tackle such challenges as well as secure maritime trade for littoral countries, especially for Bangladesh. To conclude, India-Bangladesh friendliness in the security dimension has definitely reached new heights in the past few years and it can easily be speculated that Indo-Bangladesh strategic relations will continue to add more depth and momentum in the defence and security aspect of the bilateral relationship as both countries are committed to address each other’s concerns and work towards common solutions by frequent cooperation.

CAN BANGLADESH HAVE ALL PARTY PARTICIPATORY POLL?