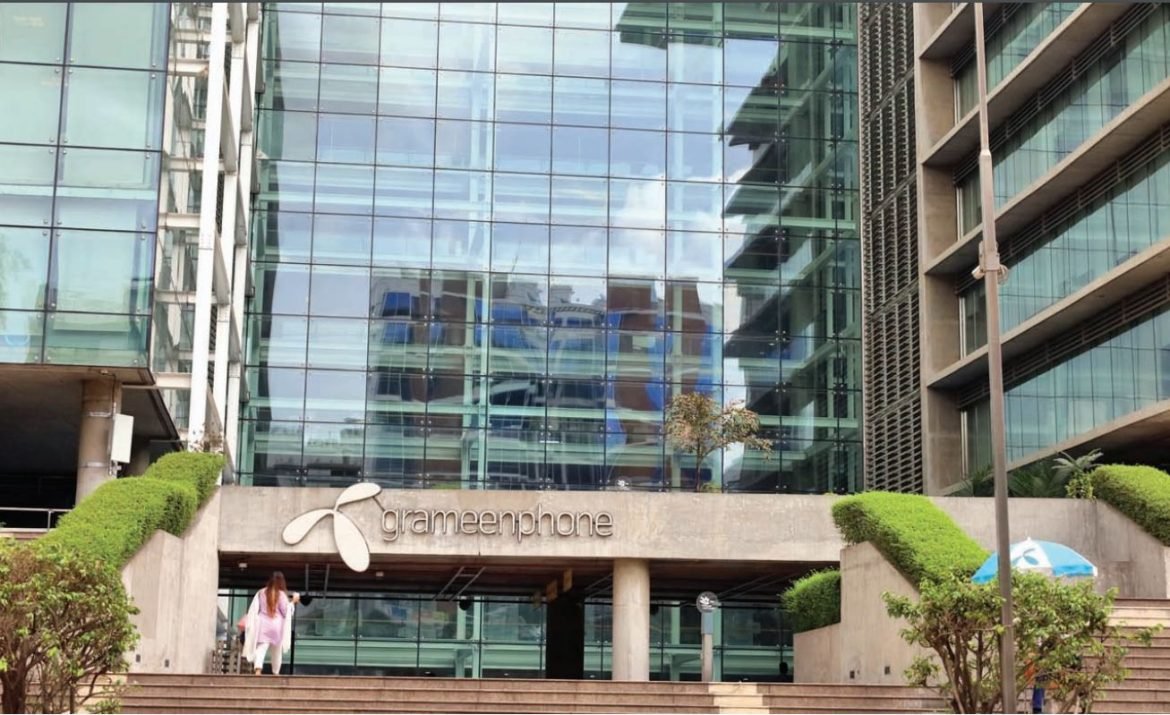 BTRC data show Grameenphone users experience the most call drops and wait the longest to get connected to their dialled number. Worryingly though, GP users to get connected wait 10.14 seconds on an average, which among the operators is the worst case. Even the connection time and call drop rate fail to match set requirements. GP in terms of providing internet services lags behind the BTRC standard too. But what led to once much-acclaimed GP’s fall in service quality? Is it a sudden occurrence not to worry much about, or is there indifference on part of GP to the continuous filing of complaints by the loyal customers it garnered over the years? MD. EMRAN HOSSAIN and SAQUIF AHMAD delve further into the details.

Grameenphone being the country’s largest mobile network provider ironically failed to deliver high quality service of voice calls and internet as promised – thereby prompting the telecom regulator Bangladesh Telecommunication Regulatory Commission (BTRC) recently to prohibit the company from issuing new SIMs. The telecom operator has been asked not to sell or supply any new SIMs till further notice. Media reports said BTRC gave a directive to Grameenphone, popularly known as GP, after approving a proposal in this regard on June 29. Meanwhile, GP termed the telecom regulator’s latest ban on its SIM sales as an unexpected move and said that it would take next course of action after assessing the regulator’s letter related to the embargo.

GP’s legacy of poor customer service, call drop and slow internet speed, high pricing in packages, tax fraudulency, fabricated income-expenditure report etc have put their operation under government’s scanner. But still there’s almost no improvement in delivery of their services. Hence, many think it was merely a matter of time for the Norwegian telecom giant Telenor-owned company to be slapped with such an embarrassing embargo on SIM business. Posts and Telecommunications Minister Mustafa Jabbar told journalists, “Despite our efforts, we have not seen any initiative from GP to improve the quality of service. If they keep increasing the customer base without improving quality of service, it cannot be allowed to happen.”

Between November 6 and 8, 2019, BTRC as regulator conducted a Quality of Service (QoS) test at 15 sites in Dhaka. It conducted 3,300 machine-generated 90-second calls. According to the survey, the country’s largest telecom operator Grameenphone has a call loss rate of 3.38 percent, whereas BTRC and ITU (International Telecommunication Union) set the limit to less than or equal to 3 percent. According to BTRC’s assessment, Grameenphone users experience the most call drops and wait the longest to get connected to the number they dial. According to the sur-vey, Grameenphone took 10.14 seconds on average to connect phone customers, whereas Robi took only 6.15 seconds, Banglalink 7.69 seconds, and TeleTalk 7.11 seconds. The connection time and call drop rate fail to satisfy BTRC’s requirements

Director of BTRC’s Engineering and Operations Division Golam Razzaque said, “The quality of Grameenphone’s service isn’t improving despite it being the top mobile phone operator with a large customer base. Again, despite numerous warnings to ensure service and assure quality of service, Grameenphone was always in the state of denial.”

BTRC imposed a number of restrictions on Grameenphone in June 2017 in an effort to check the operator’s alleged market dominance. The country’s largest telecom operator was subsequently served with an injunction in 2019 allegedly for unpaid taxes and fees. However, National Board of Revenue (NBR) charged Grameenphone with the allegation of evading tax to the tune of Tk 2,015.27 crore in 2017 as the company declared false information and displayed lower sales of SIMs, replacements, talk time, and scratch cards in order to avoid paying legally-binding income tax and VAT. Such fraudulent activity by the leading mobile operator was criticised highly by the court and the commoners alike.

Tax authorities said Grameenphone avoided taxes by almost Tk 400 crore in 2012–13 due to low returns. Additionally, it was discovered that the mismatch between the company’s income tax return and its net sales tax return was the cause of the tax evasion issue. According to the Gram-eenphone tax evasion report, the company concealed Tk 1,412.97 crore in income from the larg-est taxpayer unit (VAT) during the 2012–2013 fiscal year. Sales of SIM cards, call time, scratch cards etc were all said to be decreased for the entity. However, the government had to reportedly forgo around Tk 394.16 crore in income as a result of this information concealment.

According to a BTRC-appointed audit firm, the government’s arrears to the country’s mobile operators amounted to Tk 13,725.934 crore. Of this, Grameenphone alone had arrears amounting to Tk 10,589.94 crore. In total, the amount of Grameenphone’s audit objection amounted to Tk 12,589.94 crore. Additionally, Grameenphone owed Tk 4,085.94 crore to the National Board of Revenue. Of the grand total, the telecom giant has all in all paid only Tk 2,000 crore. The company dubbed the government audit ‘unfounded and without any legal basis.

While Grameenphone was hit by a SIM card ban, two stock exchanges of Bangladesh also experienced a ‘bearish’ run in the graph. Following the decision to ban the nation’s leading mobile operator from selling new SIM cards, the price of Grameenphone shares fell immediately by significant margin. Grameenphone remained listed on the stock exchanges since 2009 and till date, it represents 7.85 percent of the market capitalisation of the country’s premier bourse Dhaka Stock Exchange (DSE). On June 30, DSE opened trading with Grameenphone shares at Tk 300.2; however, immediately after the first hour, it had dropped by Tk 6 before ending the day at Tk 294. Over 172,000 shares of the telecom operator were exchanged.

There was a time, especially in the late 90’s, when cellular communication started flourishing globally, whereas Bangladesh was still dependent on paper-based letter writing. Country’s first mobile network provider Citycell along with Grameenphone started offering mobile phones to masses. At one stage, mobile phone turned out to be a monopoly business in communication. Gradually, remote areas were exposed for coverage. At that time a certain operator used to charge Tk 27 per minute, gradually it was dropped down to Tk 6.90 per minute and nowadays it takes less than Tk 1 per minute to call. It is, however, often alleged that Grameenphone and Citycell took the advantage of monopoly business during the early years of telecom business. Grameenphone even charged their customers unethically using the loopholes in telecommunication law and taking the benefits of no monitor-ing from the authorities concerned. Looking into current scenario, it’s evident that infrastructure and competition among the operators have increased significantly these days.

The government, to fulfil its vision to establish ‘Digital Bangladesh’ and ensure ‘Access to In-formation,’ has subsidised the telecom sector. Grameenphone is also taking advantages from such schemes including VAT and tax rebate, subsidy, lesser import duties etc. However, the company stands far behind in terms of engaging customers with quality services.

As par the BTRC chart, the minimum call rate for telecom operators is Tk 0.45 for each minute and Tk 0.54 for a minute after adding the value-added tax and other duties. But users often complain that Grameenphone is charging higher than the market average cost per minute.

BTRC conducted a test from December 13-31 last year. The test report found that three mobile phone operators — Grameenphone, Robi, and Teletalk — failed to maintain 4G internet speed criteria in terms of downloading speed in Dhaka division. The test diagnosed that all of the mobile operators except for Banglalink were offering 4G speeds that were less than the regional benchmark of 7Mbps. For Grameenphone, the test result found the download speed to be found only around 6Mbps.

Grameenphone, in advertisements and TVCs, continues to preach that they have got ‘strong net-work’ towers with loyal customers using benefits of the Telco’s network coverage even in the remote areas. The user experiences, however, say otherwise! In fact, what they preach isn’t nec-essarily what the customers get as GP’s promised services. A good number of GP towers across the country are alleged to be non-functional or age-old and many of those don’t even support 3G standard coverage, which is why, allegations remain rife that Grameenphone often tends to in-vest more in exaggerated marketing campaign rather than upgrading its network core.

A ‘Performance Evaluation Report’ on Grameenphone was conducted by the Asian Develop-ment Bank back in 2013. The report found that Bangladesh had 0.3 telephone lines per 100 resi-dents in 1996, ranking it as the third-lowest country in Asia and the thirteenth-lowest in the world overall. At that time, Citycell being the only mobile phone operator had roughly 20,000 users while the government-owned Bangladesh Telegraph and Telephone Board had about 350,000. Three major cities — Chittagong, Dhaka and Khulna — had 70 percent of the country’s telephone users. Less than one telephone per 1,000 people could be found across the rest of the nation. But as of May this year, the client base of Grameenphone was found to be the largest among the four mobile phone operators with over 85 million users, which is 46% among all providers.

Grameenphone responded by stating that it has been maintaining services well ahead of BTRC’s QoS criteria and ITU’s worldwide benchmark. Additionally, the operator said, “Grameenphone has been working closely with BTRC to continuously enhance the network quality and service by purchasing the maximum permitted spectrum in the most recent auction and implementing a number of network modernisation measures.”

A multinational giant cellular operator headed by Telenor Norway, Grameenphone is undoubted-ly the leading mobile service provider in the country. Telecom authorities and the users expect uninterrupted service with logical costs from Grameenphone. In order to flourish telecom busi-ness further, the role of transparent business policy and customer satisfaction is of paramount im-portance in any parameter in Bangladesh as elsewhere in the world.