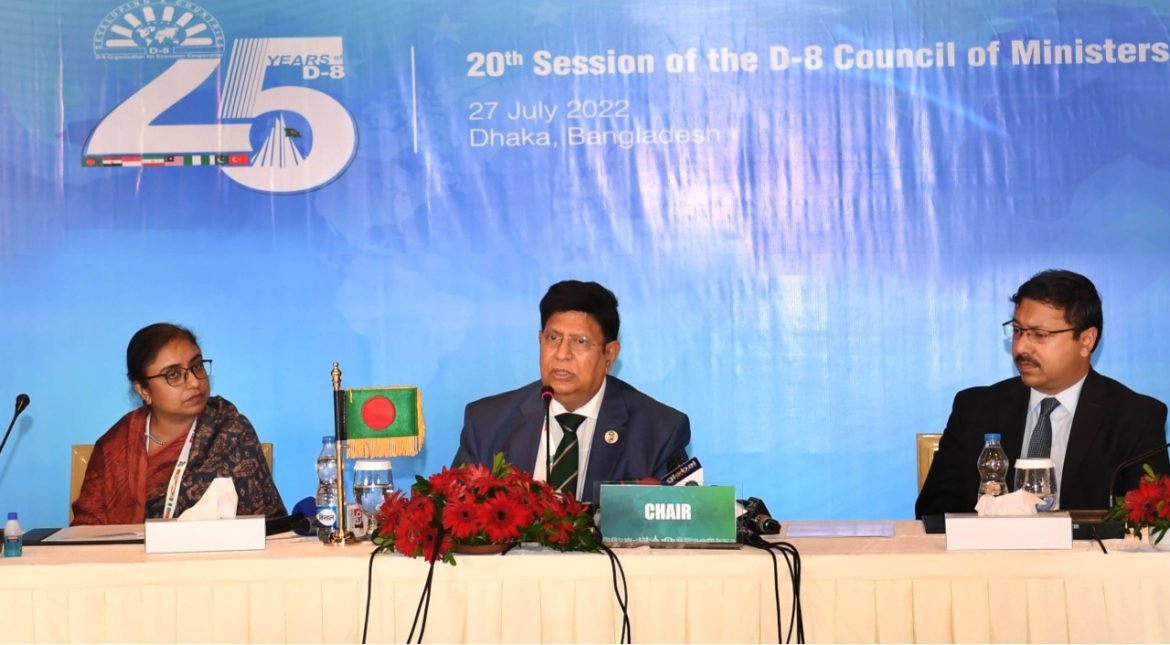 The Preferential Trade Agreement (PTA) between the D-8 member states is likely to come into effect in October this year with Egypt’s waited approval which will help boost intra-trade.

In this regard, Foreign Minister Dr AK Abdul Momen said the seven member states other than Egypt have ratified the D-8 PTA.

He further said, “You will be happy to know that Egypt has announced at this meeting that they will soon ratify the D-8 PTA.”

Dr Momen made the remarks while briefing the media on the outcome of the D-8 Ministerial meeting in Dhaka on July 27.

D-8, also known as Developing-8, is an organisation for development cooperation among Bangladesh, Egypt, Indonesia, Iran, Malaysia, Nigeria, Pakistan and Turkey. It was officially launched in Istanbul in 1997.

The objectives of D-8 Organization for Economic Cooperation are to improve member states’ position in the global economy, diversify and create new opportunities in trade relations, enhance participation in decision-making at international level, and improve standards of living.

The volume of intra-trade among the D-8 member states at the time of establishment was $14 billion, which has now reached $129 billion. “My hope is that within the next 10 years our intra trade will increase by 10 times. That’s my hope. There is no reason that we can’t achieve it,” Dr Momen said.

The D-8 Preferential Trade Agreement, signed on 13th May 2006 in Indonesia, is regarded as one of the most tangible outcomes of D-8 cooperation in trade.

Foreign Minister said the process of finalization of the draft “Trade Facilitation Strategy” is underway with a view to speedy implementation of the D-8 PTA.

The issue was reviewed in the ministerial meeting and it is expected that this draft Trade Facilitation Strategy will be accepted in the 3rd Trade Ministers meeting to be held in Bangladesh soon, he said.

Dr Momen also talked about tariff barriers and hoped that those barriers will be removed to help boost trade among the member countries.

The member states accepted the proposal when Egypt came up with it at the D-8 Ministerial meeting on July 27. “They (Egypt) made a special request. We have no objection. Other member states also agreed. This is a good news for us,” he added.