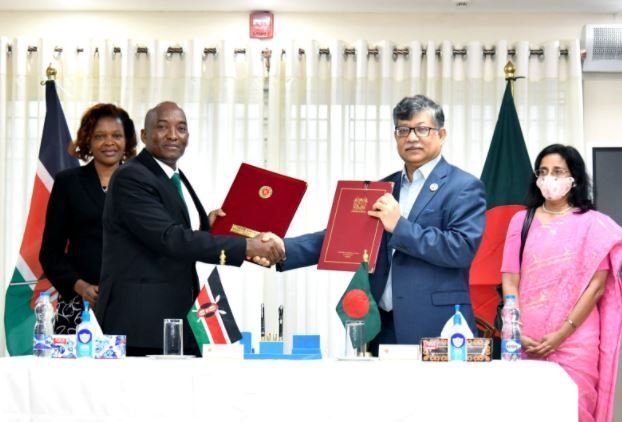 Bangladesh and Kenya have agreed to develop cooperation in contract farming, air connectivity, blue economy and food security. The countries also want to strengthen cooperation between their investment authorities apart from exploring opportunities in technical exchanges, education sector and youth cooperation. A 10-member delegation led by Moi Lemoshira, additional secretary of the Ministry of Foreign Affairs of Kenya, joined the first foreign office consultations with the Ministry of Foreign Affairs (MoFA), Bangladesh on July 24.

The delegation will also have meetings with government agencies and apex chambers and visit export processing zones and manufacturing industries in Bangladesh. It comprises the additional secretary of the foreign ministry, the high commissioner of Kenya in New Delhi and other officials of the Kenyan government. The consultations held at the Foreign Service Academy were presided over by Mashfee Binte Shams, secretary (east) of MoFA, and Lemoshira.

What the Kenya delegation said?

During the foreign office consultations, Lemoshira mentioned that the consultations will help identify new areas of cooperation and strengthen the existing relations. He said apart from diplomatic ties, the necessities of augmenting relations in trade and economic areas are being increasingly felt. The Kenyan side expressed interest in initiating cooperation between the Foreign Service academies of the two countries. Lemoshira emphasised establishing joint economic cooperation and signing joint trade agreements.

Mashfee Binte Shams said there may be exchanges of knowledge and training in agriculture, IT, women empowerment and UN peacekeeping. She also highlighted the importance of the exchange of trade delegations.

To conclude, both sides also pledged to continue cooperation at bilateral and multilateral platforms like the UN, the Commonwealth and the Indian Ocean Rim Association. At the end of the meeting, Foreign Secretary Masud Bin Momen and Lemoshira signed agreements on bilateral political consultations and cooperation between Foreign Service academies.