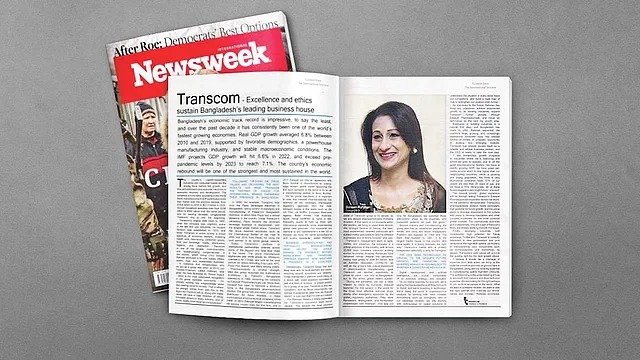 The United States-based prestigious weekly magazine Newsweek has highlighted the story of Bangladesh’s remarkable economic advancement and achievement in its latest issue. For the avid readers of Press Xpress, we hereby consider it relevant to put further focus on the story:

Newsweek magazine mentioned that Bangladesh is stepping forward into the second phase being in solid shape as it becomes one of the fastest-growing economies in the Asia-Pacific region. Bangladesh achieved these success under the leadership of Prime Minister Sheikh Hasina who has overseen “a rapid transformation of the domestic economy” over more than a decade. In addition, the expansion of industries led by domestic entrepreneurs has paved the way for Bangladesh to begin its journey to becoming an industrial nation by reducing its high reliance on agriculture.Industry’s contribution to Bangladesh’s economy grew from less than 20 percent to more than 33.5 percent between 2010 and 2018, while manufacturing’s contribution to gross domestic product has doubled since 1980, with exports growing twenty times as large since the 1990s, said Newsweek’s content from The International Investor section. The magazine also featured several outstanding business houses, including Transcom Group, that drive the growth of the economy.

Transcom, mentioned in the magazine, is a fast-growing corporation in Bangladesh and is active in diversified sectors of the economy, including healthcare, fast-moving consumer goods, food and beverage, media, electronics, logistics, and distribution. Currently, Transcom has the franchise of Pepsi, which is a dominant player in the beverage business in Bangladesh. The group also manufacturers appliances and white goods for Whirlpool and cosmetics for L’Oreal and acts as the local partner for others, including Frito-Lays, KFC, Pizza Hut, Abbott and Mars. Founder of the company, Latifur Rahman won the Oslo Business for Peace Award in 2012 for maintaining his commitment to social responsibility and ethical values. “That is where our strength comes from, and this is the legacy our chairman left for us,” said Transcom Group Chief Executive Officer Simeen Rahman. “Along with these values, we have a clear direction of being formidable players in every industry. And of course, quality must never be compromised,” she added.

Meanwhile, Eskayef Pharmaceuticals Ltd is also mentioned in the magazine, has been the leading force in Bangladesh’s pharmaceutical market. It started manufacturing life-saving insulin vials for Novo Nordisk in 2012, four years after it became the distributor of the major multinational pharmaceutical company. In 2017, Eskayef got into an agreement with Novo Nordisk to produce its modern penfill insulin and became the first company in the world to do so as a manufacturing partner of the Danish multinational company. In this regard, Simeen Rahman said, “Eskayef’s quality is right up there with international standards whilst implementing global best practices. Our standards are identical to any manufacturer in the US or Europe. We have the same accreditations and quality standards.”

Digital development and artificial intelligence are crucial components of the business strategy of Transcom, which employs around 20,000 people. The group aims to achieve exponential growth in its existing industries, expand its footprint globally through Eskayef Pharmaceuticals and focus on technology as the big growth area.

Newsweek also featured other business houses such as Concord Group, a construction and real estate major, Envoy Group, one of the top garment exporters in Bangladesh, and United Group, which operates in the power, real estate and healthcare sectors. It also highlighted Confidence Group that has business interests in cement, concrete ready-mix, power and telecommunication, Sikder Group, which runs businesses in the infrastructure, power and insurance sectors, Hosaf Group, which has businesses in LED lights and electric metres, and Multimode Group, which is engaged in the seeds, livestock, silk and textile sectors.