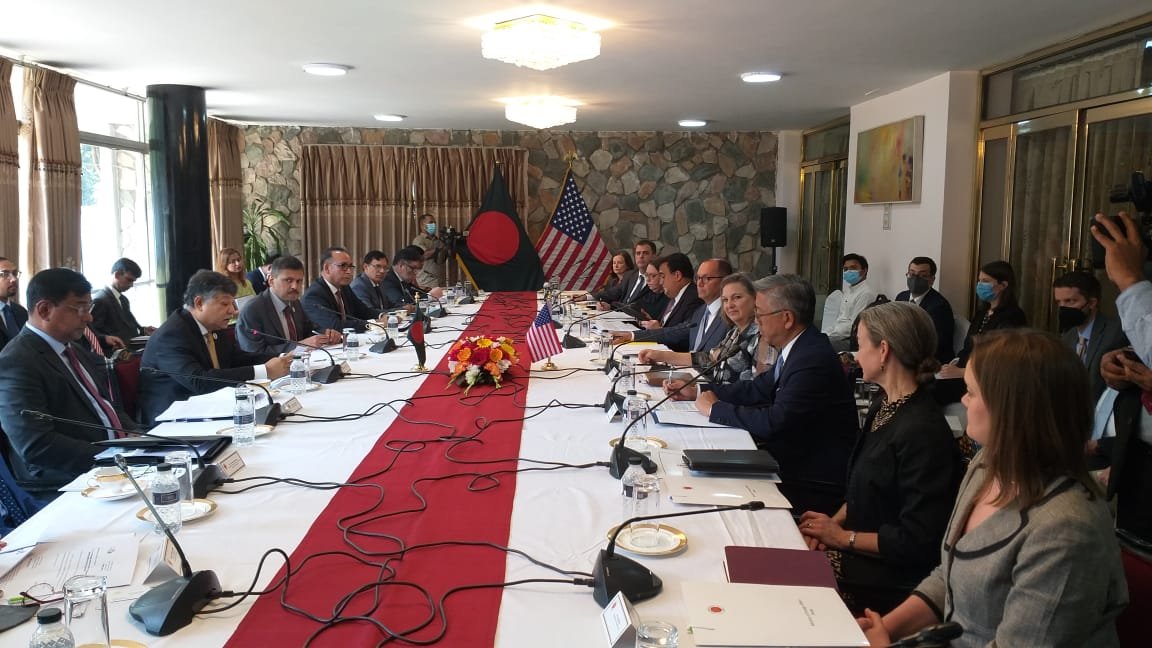 The USA has urged Bangladesh to stand by Ukraine in the ongoing Ukraine-Russia conflict. The call was made by US Under-Secretary of State for Political Affairs Victoria Nuland during a meeting with Bangladesh Foreign Secretary Masud bin Momen during the 8th Partnership Dialogue between Bangladesh and the USA on March 20.

The 8th Partnership Dialogue is being held to further strengthen ties between the two friendly countries marking the 50th anniversary of bilateral relations. The dialogue started Sunday morning at the state guest house Padma in Dhaka. Masud Bin Momen and Victoria Nuland represented their respective sides.

In the dialogue, Victoria Nuland said her country wants to work together with Bangladesh in the interest of global security.

At the beginning of the meeting, the US Under-Secretary General said, “Russia’s aggression in Ukraine posed a threat to global security. The aggression has also threatened international law. Bangladesh must stand by Ukraine to deal with this threat.”

Meanwhile, the head of the US delegation praised Bangladesh’s recent economic progress. He said many more US companies are keen to invest in Bangladesh and to be a partner in Bangladesh’s economic growth. However, Bangladesh needs to do more to improve the investment climate.

Victoria Nuland arrived in Dhaka on Saturday afternoon to join the dialogue and Foreign Secretary Masud bin Momen received her at Hazrat Shahjalal International Airport. Nuland first came to Dhaka as part of a trilateral tour of India, Sri Lanka and South Asia from 19th March to 23rd March.

After the 90-minute ‘Partnership Dialogue’, the Foreign Secretary and the US Under Secretary will attend a joint briefing at the State Guest House to announce the outcome of their discussions.

Later, Victoria Nuland will join a meeting with Foreign Minister AK Abdul Momen. The meeting will focus on trade and investment, labor, human rights and governance, global threats, including climate change, and regional issues, including a free and open Indo-Pacific region, and security cooperation, according to Bangladesh’s State Department and US diplomats in Dhaka.

During the visit, the Under-Secretary and his accompanying delegation will also meet with civil society and business leaders to strengthen the economic partnership and deepen ties for peace, prosperity and security in the Indo-Pacific region.
The partnership dialogue is gaining momentum with the United States imposing sanctions on the Rapid Action Battalion (RAB) and several of its senior officers on 10th December 2021.

Regarding the meeting of the Partnership Dialogue, a Foreign Ministry official said, “The dialogue will highlight the issue of sanctions on RAB and the success of the law enforcement unit in curbing terrorism and drug trafficking in the country.”
“Whenever there are allegations of human rights violations against some members of the RAB, Dhaka will present evidence of action against them at the meeting,” the official said.

According to US officials, the US Embassy in Dhaka, the State Department in Washington DC and Bangladesh’s Foreign Ministry have worked together to set the agenda for the dialogue.

The 7th Bangladesh-US Partnership Dialogue was held in 2019. The United States then promised to provide additional security assistance to Bangladesh to enhance maritime domain awareness, piracy and regional security coordination in the Bay of Bengal. The proceedings will also be discussed in this year’s partnership dialogue.

HOW COSTLY IS IT TO LIVE IN DHAKA?