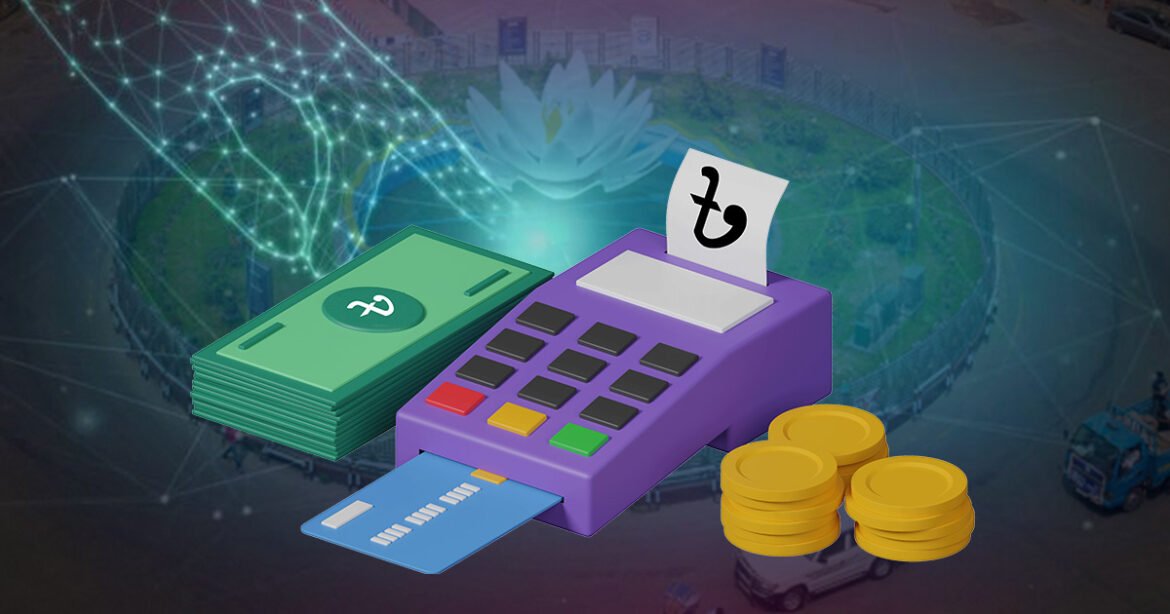 Bangladesh is taking a step ahead of building “Digital Bangladesh” by introducing a “cashless” society to maintain transparency, accountability, and mobility in financial transactions, which starts in Motijheel on 18th January 2023.

In a “cashless economy,” all financial transactions take place digitally rather than using physical money like coins or banknotes. If we look back to history, cashless societies have been around since the beginning of human civilizations. There were many kinds of trade, including a few effective barter systems. In the present world, the most popular methods of cashless transactions are credit and debit cards, points of sale (PoS), mobile banking, mobile financial services, online banking, etc.

The most frequent form of payment in Bangladesh is the paper currency or physical cash. This strategy impedes the development of a completely digital economic system. In addition to its inherent risks, the conventional method is so outdated that it cannot compete with alternative computerized economic systems.

A reflection of digitalization

Bangladesh’s monetary system is experiencing a revolutionary change. Cashless transactions are gaining popularity due to the economy’s fast digitalization. Recent data from the Bangladesh Bank (BB) indicates that more than BDT 3000 crore is transacted via mobile financial services (MFS). Even the use of plastic money has grown rapidly, as shown by the 24% rise in credit card debt over the past few years.

The government’s initiative to create a “Digital Bangladesh,” the expansion of digital banking services, and the development of mobile money and e-commerce platforms are the reasons contributing to the shift toward cashless or digital payments.

Zunaid Ahmed Palak, state minister for the ICT division, stated in a meeting on Tuesday that the government is aiming to create a cashless society and a fully digital office by the year 2041.

“Our target is to ensure an entirely digital paperless office and build a cashless society by 2041. It will help ensure transparency and accountability”

The FinTech sector is expanding its use of integrated transaction and cashless payment technologies. Bangladesh is on course to become a leader in digital payments as a result of the tremendous growth in the number of cashless transactions in the nation. However, in order to make the nation a cashless economy, requires solving a few challenges.

The Cashless Bangladesh campaign is starting tomorrow by introducing the service in Motijheel area. All the transactions will be done via mobile apps and other mobile financial services. The slogan of this campaign is – ‘Smart Bangladesh will be attained with universal payment services’.

In addition, card service providers MasterCard, Visa, and Amex have joined the service, along with MFS providers -bKash, mCash, and Rocket.

As part of this project, QR codes have been given to many vendors in the Motijheel area, including tea shops, grocery stores, hotels, and cobblers. Customers can use the QR codes to pay their bills.

Individual retail accounts are being opened as part of the “Cashless Bangladesh” project. It helps to digitize and formalize the bill acceptance process for labor-dependent micro entrepreneurs (tea vendors, spicy puff rice (jhalmuri) vendors, vegetable vendors, fish vendors), as well as service providers engaged in different marginal professions (cobblers, barbers, hawkers). The traders who conduct their business under this account are regarded as micro-merchants.

The rapid adaptation of cashless transactions from pandemic

Since the COVID-19 outbreak, more consumers are opting for cashless payment methods, which has increased MFS activity and transaction volume nationally. According to industry experts, additional services including bill payment, loan disbursement, employee salaries and benefits, and shopping are being added for the convenience of using mobile banking. Mobile banking services like bKash, Rocket, and Nagad have gained rapid popularity and reliance among consumers.

Presently, more than 18 crore people use mobile banking. bKash, Rocket, UCash, MyCash, and SureCash are few of the services that 13 banks in the country currently provide for their mobile banking services. By the end of July 2022, over 18.11 crore individuals had registered for mobile banking.

According to the MasterCard Economic Outlook Report, which was published in December 2021, e-commerce has been central to the role that digital agility has played in generating more money throughout the world. According to the research, online transactions “grew more in countries with higher pre-pandemic levels of digital maturity.”

Major economies around the world have embraced and given significant consideration to the concept of a cashless society. Sweden is arguably the best example of a country that has implemented a cashless society in the modern period. Sweden was the first nation to use banknotes, and in a similar vein, they were the first to move toward a cashless economy throughout the majority of their industries. Sweden is the country with the least amount of cash in circulation. There are only 32 ATMs for every 100,000 people, and more than 98% of the people there have a debit or credit card. It is also one of the best nations for mobile banking.

The percentage of Swedes using cash declined from 39% to 9% between 2010 and 2020, according to the most recent statistics from Sweden’s state bank, the Riksbank. Only modest transactions are frequently completed in cash in Sweden.

Furthermore, in November 2020, China’s finance ministers started the digital Yen pilot program. Thousands of Chinese people were given the equivalent of $40 USD to spend in an e-wallet as a test to see how well a digital currency issued by the Chinese Central Bank would work. By the time the Chinese Winter Olympics started in February 2022, the project had collected data for two years and paid out $13.68 billion. China still has a sizable population that relies on cash, but over the next two to three years it hopes to eliminate all cash from its economy.

The impacts of going cashless

Historically, a cash-based monetary system has been prone to corruption and unfair advantages, and Bangladesh is no different. A survey published in The United News of Bangladesh found that cash is the most popular form of money laundering; because the tracking method is not only useless but also practically difficult to employ.

Cashless transaction reduces a lot of business and institution risks at once, such as cash theft by employees, fake money, and cash robberies. It also reduces the expense of security, bank withdrawals, transportation, and counting.

A simple and hassle-free payment mechanism has been a global concern, which seems to be solved with cashless transactions. Earlier, a person was compelled to buy foreign currency when visiting a foreign country. With paperless payment options, they can now execute transactions directly from their digital payment applications depending on the currency conversion rate, eliminating the need for physical foreign currency. Additionally, since all cashless payments are recorded financial transactions, the government may simply track the flow of funds using this information. Additionally, these data help to uncover money laundering and illicit financial activity.

Comes with a little challenge

The usage of digital money could give a lot of benefits to the citizens and the government.

However, in Bangladesh, where computer literacy is still in its infancy, individuals may be exposed to online fraud. The broad national anti-fraud campaign of bKash makes it evident. Due to low levels of technological literacy, an entire generation must be educated on the features and procedures of digital transactions.

Despite the ifs and buts, optimism for a better future exists. The government and industry have already taken the initiative to promote digital financial inclusion and digital banking. This will assist our nation in achieving the next two objectives, which are to have an upper-middle-income country by 2031 and a developed country by 2041. With a cashless economy, the Bangladesh government will also be able to follow the flow of money more effectively through financial transaction records and identify unauthorized transactions.