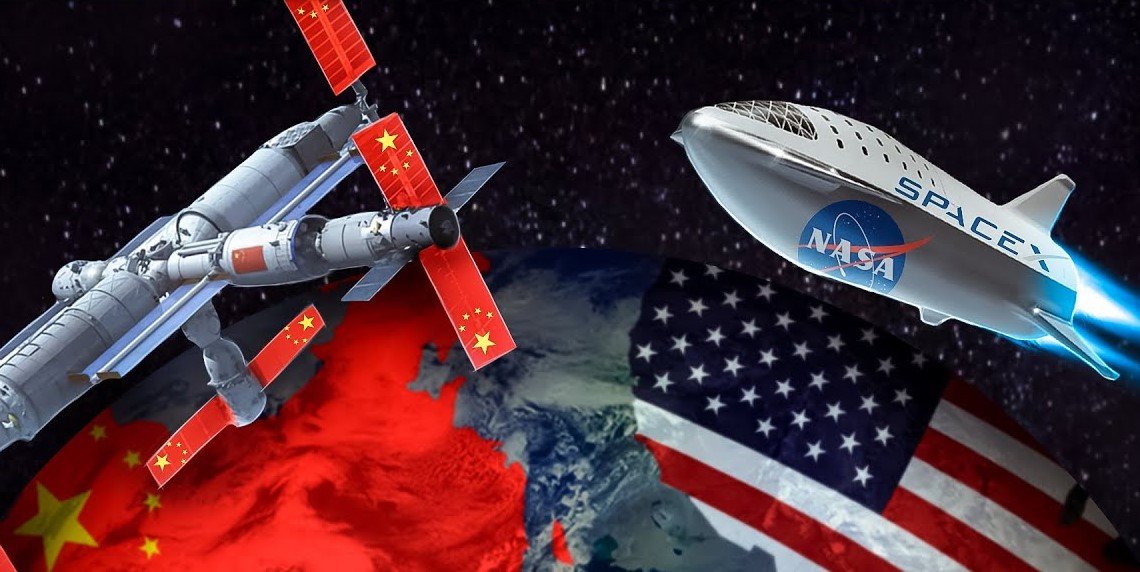 The United States and China are engaged in a space competition, and a new order is forming. However, these global giants won’t be sufficient to meet the challenges of space exploration on their own.

Many nations have launched space programs in recent years, expanding their exploration of space. Israel and India tried to land spacecraft on the moon in 2019. South Korea launched a spacecraft in August 2022, and in December 2022, it orbited the moon. Additionally, Japanese firm ispace sent a lunar lander toward the moon on a SpaceX Falcon 9 rocket late last year.

YOU CAN ALSO READ: HOW US IS BEATING CHINA ON CHIP WAR?

China is the country that the U.S. is most interested in and worried about because it has started to close the gap in technology that the U.S. has had for decades. 2019 saw the historic first landing of a spacecraft by China on the far side of the moon. It accomplished the successful deployment of a vehicle on Mars in 2021, making it the only nation besides the United States to do it. It has also put together its own space station in Earth orbit at a time when the International Space Station (ISS) is getting old. Additionally, relations between the United States and Russia, the two main partners on the ISS, have become tense because Russia invaded Ukraine.

The space competition now is undoubtedly far more dynamic than it was fifty years ago. Instead of merely reaching the moon, the United States and China want to mine it, laying claim to the water that exists in the form of ice as well as other valuable resources, such as metals and oxygen, trapped in the lunar regolith. Here comes the progress competition with limited resources which threw challenges for the nations.

The space war: China seems ahead of the U.S.

The Artemis program of NASA has started the agency’s return to the Moon. Three missions have been launched, the first of which was successful. The rockets and technology were put to the test during an unmanned flight. The mission, which represents the first significant step in NASA’s goal to return humans to the moon, was lauded as “successful beyond NASA’s dreams.” The second mission will transport humans further into space than ever before, and the third mission will place astronauts on the Moon for a week to conduct experiments. The long-term objective is to reach Mars using the Moon as a jumping off point.

The scheme is expected to cost $93 billion (£76 billion), a hefty price tag for the already constrained taxpaying U. S. However, Congress continues to support NASA’s human space exploration endeavors even though it will receive less overall funds than it requested in 2023.

However, a report written by representatives from the Space Force, the Defense Innovation Unit, the Air Force, and the Air Force Research Laboratory casts doubt on NASA’s accomplishments due to China’s “strategic goal of displacing the US as the dominant global space power economically, diplomatically and militarily.”

“While the United States space industrial base remains on an upward trajectory, participants expressed concerns that the upward trajectory of the People’s Republic of China is even steeper, with a significant rate of overtake, requiring urgent action,” the report states.

China has made remarkable astronomical developments in last 20 years. The country has successfully launched Tiangong, its own fully functional space station, into orbit on schedule. Chinese spacecraft have sent probes to Mars and the Moon. By 2025, it intends to set up an unmanned research outpost on the Moon, and by2030, astronauts would touch down there.

Yet, the Mars mission is critical with distance and no unity

Although humans have been on the Moon before, sending them to Mars is a much more challenging endeavor. Since there are no spacecraft capable of bringing people to the red planet at the moment, it is 250 times farther away than the Moon. The challenge of returning the men safely to Earth after months in space still remains, even if scientists are able to launch a fuel-heavy rocket and land it on a planet with such a low atmosphere.

Moreover, nations with major powers have competed for dominance over the Earth throughout history. In the 1950s and 1960s, America and Russia fought one other for supremacy. The first man was put into orbit by the Russians. A few years later, the Americans set up their flag and put a man on the moon.

The 1970s saw the beginning of a golden age of international cooperation, which resulted in the International Space Station (ISS) project, which was launched in 1998. Russia and America constructed ISS, the largest structure in space along with 13 other cooperating nations. Each country must rely on the other to function because it is not owned by any one country.

It served as a reminder of the progress humanity could make if all countries set aside their differences and cooperated. But the truth was a little different. China went their own way because, specifically, America stopped them from joining as partners in the ISS.

More recently, countries stopped cooperating with Russia just a few weeks after the invasion of Ukraine.

The European Space Agency (ESA) and Russia have canceled two cooperative Moon projects, as well as a combined Mars Rover mission to look for indications of life on the red planet. Russia has not been in a favorable situation compared to China’s progress and U.S.’s spending.

Currently, 72 nations have their own space programs because they can no longer afford to fall behind in the new space race. The space industry is both expensive and technically challenging. No one nation can accomplish it alone. New alliances are being formed to achieve the unachievable.

China is playing smart as the country is well aware of the fact that partnerships provide both money and technical expertise. In addition to inviting other nations banned from using the ISS to join them, it has issued a request for suggestions for scientific studies.

The first astronaut from the United Kingdom, Helen Sharman, believes that the pragmatism of business might put the current conflicts between nations to rest. She traveled to the Soviet Space Station Mir in 1991. She told the BBC that “It really is going to be commercialization that brings companies together worldwide. We don’t care where they are registered, what matters is what they do for the benefit of the world.”

However, the set of international laws controlling space has the potential to hinder the next major drive to other worlds. The Outer Space Treaty has not been amended since it was signed in 1967 by 31 nations, including the United States and the Soviet Union, who promised not to possess nuclear weapons in space.

There is already no hope on China and the US cooperating for mutual benefit given their ongoing rivalry and competition. If the United States and China find themselves neighbors near the south pole of the moon, that might result in an unsettling and hostile situation. It is already a barren and gloomy spot, but icy relationships might make it even colder.