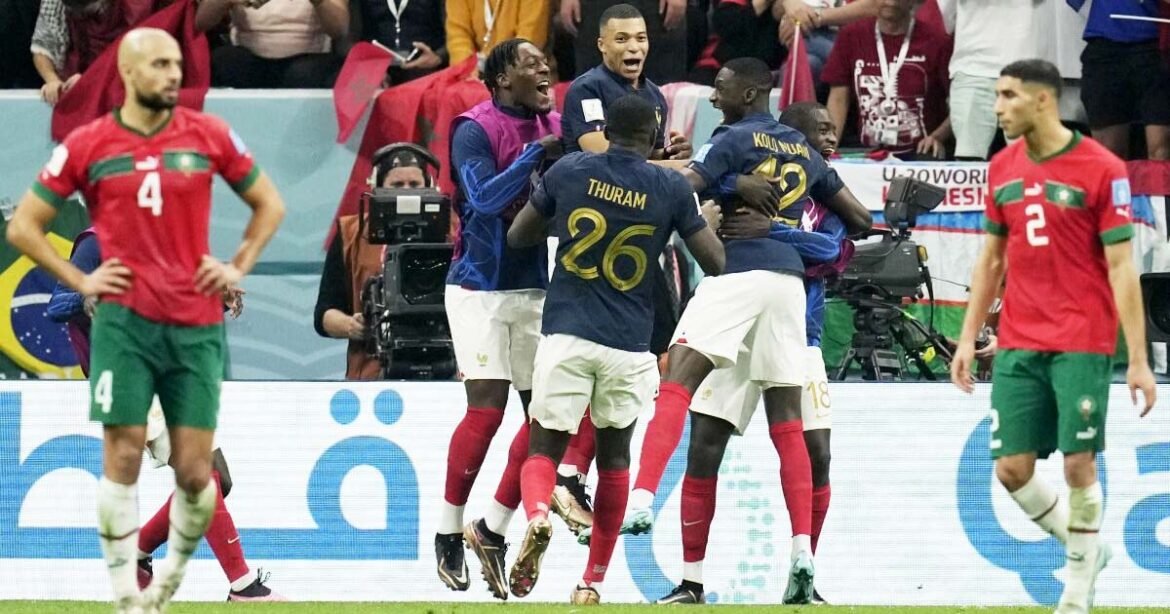 Qatar’s Al Bayt Stadium was full of red. The red festival of Morocco was replaced with French cheer later as France beat Morocco 2-0 to reach the FIFA World Cup 2022 final for the second time in a row. Their opponents are Argentina. The final match will be played at Lucille Stadium on December 18.

No opponents could send the ball into the Moroccan net in five world cup matches. France’s Theo Hernandez’s goal against Morocco in the fifth minute in the semi-finals ended that brilliant run. But, brave Morocco did not fall behind against the reigning champions. They tried to get back into the game. At the last minute of the first half, Morocco almost came back into the match. They could have scored if bad luck had not intervened. When the defenders failed to clear the ball from the Moroccan corner, Jawad El Yamik got it in the box. His overhead kick hits the post.

YOU CAN ALSO READ: END OF ERA: GREAT FOOTBALLERS WHO’LL GRACE THE OCCASION ONE LAST TIME

In the second half, reigning champions France were under a lot of pressure. France was busy dealing with the Moroccan invasions. They created a number of scoring chances but poor finishing kept them from scoring, on the other hand, France also defended well. Morocco terrorised France’s box in two consecutive minutes with a planned attack. In the 54th minute, Sofian Amrabat could not take a proper shot, the ball went out. After three minutes, Achraf Hakimi failed to take a shot despite receiving the ball outside the six-yard box.

France doubled the score in the 80th minute. One of the best players in this tournament is France’s Mbappe. He showed his flashes throughout the match. The second goal was passed by him. Mbappe passed the ball to Thuram on the left and entered the box. After receiving a return pass, the Paris Saint Germein star took a shot. The ball hit the feet of a defender and went to the far post. Dembele’s replacement, Kolo Muani burst into jubilation after 44 seconds when he found space and sent the ball into the net with a tap of his right foot. Attacking evenly with more than 60 percent of possession throughout the match, Morocco took 13 shots on goal, one fewer than their opponents. Both teams tied for 3 shots on target; But Morocco could not be perfect there. Morocco’s incredible journey ended with the final whistle. TV cameras caught the faces of Moroccan supporters covered in despair. Hakimi-Ziyach’s eyes and faces are filled with the pain of farewell from the touch of a bigger dream.

Morocco played every match with great team spirit. This achievement is also huge for the 22nd ranked team. To the people of the country, they have long ago received the status of heroes. However, after topping the group of Croatia and Belgium and reaching the knockout stages, then beating teams like Spain and Portugal to reach this far, the dream was all about flying higher. Therefore, even in the midst of sky-high achievements, the disappointment of not being a little brighter at the end remained.