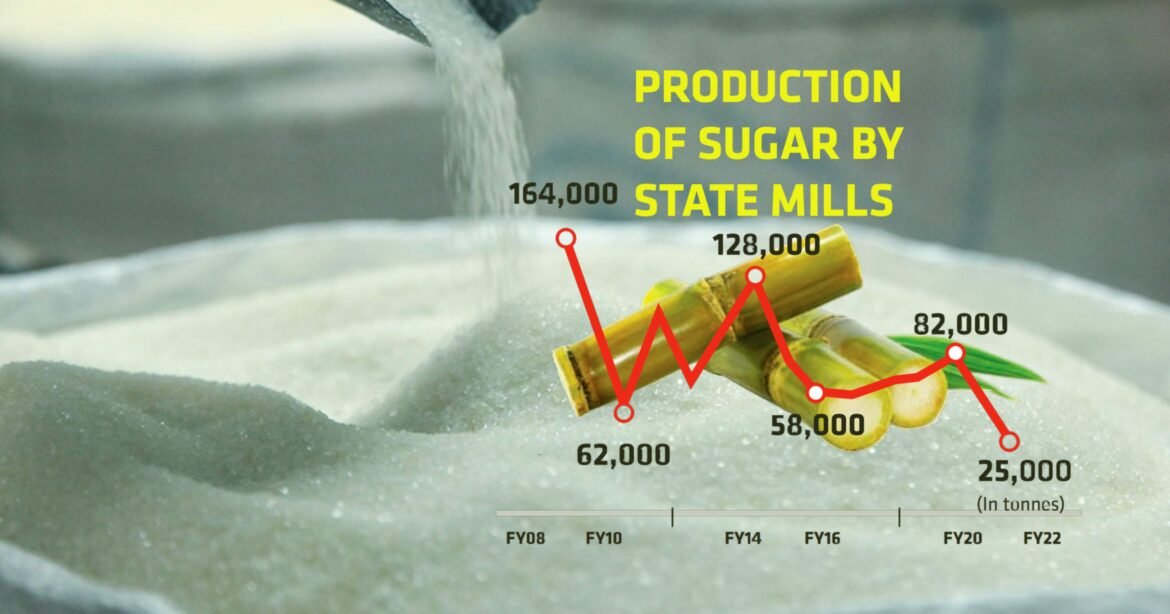 The price of sugar in the country has increased abnormally. For this, people are blaming unscrupulous traders who create artificial crisis by hoarding sugar, as a result of which sugar is being sold in the market at higher prices than the price fixed by the government. Also, many are questioning the decision to shut down six sugar mills for modernising. Therefore, people are expecting from the government to take timely initiatives to prevent the rise in sugar prices as soon as possible. Writes SM TANJIL-UL-HAQUE

There has been an increase in the price of daily necessities in Bangladesh for several months now. The Covid pandemic has had a massive impact on global markets, which has been further mitigated by the Ukraine-Russia conflict, resulting in a worldwide crisis. As a result of this, first the dollar crisis and then the increase in the price of fuel have led to a spiral of commodity prices in Bangladesh. Due to the pressure of inflation, people who are struggling to balance their income and expenses are seeing that everything is getting out of reach day by day. In the first month of the current financial year, the average price inflation was 7.48 percent, and it increased to 9.52 percent in August.

However, it decreased slightly to 9.10 percent in September. In such a dire situation, a greedy class of businessmen form syndicates and take profit by destabilising the market through manipulation. Due to that, from the beginning of this year to this month, the price of sugar has increased gradually along with various daily necessities is now reached to highest. To deal with this, the government has recently increased the price of packaged sugar to Tk 108 per kg and loose sugar Tk 102 per kg. Nevertheless, in the most inflationary market in recent memory, consumers now have to buy sugar at Tk 120 per kg from market.

Even after the government fixed the price, within three to four days the price of sugar again increased by Tk 10-15 per kg, making the consumers extremely annoyed. Concerns say that the private mill owners of sugar refining have created an artificial crisis in the market through manipulation. Though the commerce minister Tipu Munshi has ensured that the problem will be solved soon, but, the way the price of sugar has skyrocketed, mountains of complaints are increasing in the minds of the people. Now the question remains as to why the price of sugar is increasing even after the closure of loss-making sugar mills run by the government?

Six loss-making state-owned sugar mills were shut down in 2020 so that they could undergo modernisation and eventually become commercially viable again. However, these are currently abandoned despite huge expenditure piled up to maintain machinery, vehicles and infrastructure. Also paying huge sums for utility bills and other expenses, indicating that these mills are still wasting a lot of government funds. So now the question is that was it the right decision of the government to close the sugar mills?

Depleting stocks owing to a very low production is largely responsible for the current weak state of the state-run Bangladesh Sugar and Food Industries Corporation (BSFIC), as they cannot increase the supply immediately to provide some relief to consumers. Prior to this, following a government order on 2nd December 2020, BSFIC has closed six state-run sugar mills; Pabna sugar mill, Shyampur sugar mill, and the sugar mills in Panchagarh, Setabganj, Rangpur and Kushtia. Manufacturing operations of these mills are suspended until further notice.

As a result, Pabna sugar mill, one of the largest sugar mills in the country, has turned into a jungle instead of a manufacturing unit. Additionally, the complete lack of maintenance has brought its machinery, vehicles and infrastructure to the brink of destruction. Also, BSFIC is unfortunately still in the process of transferring machinery and vehicles from the closed sugar mills as per the request of concerned authorities. Established in 1992 at a cost of almost Tk 80 crore, the Pabna sugar mill started operations with a target of producing 15,000 tonnes of sugar per year from 1.5 tonnes of sugarcane.

The mill never achieved this target and instead suffered a combined loss of Tk 400 crore. In such a situation, when the mill was finally closed down by the government, many machineries including 20 tractors and 122 trolleys for carrying sugarcane became inoperable. Furthermore, key infrastructure such as offices and residential buildings worth over Tk 100 crore are also on the verge of collapse, officials confirmed. Pabna sugar mill once employed a total of 589 workers but after its closure, most of them were transferred to operational units. Now, there are 30 security personnel and 31 officers for maintenance, which are insufficient and inadequate.

WHAT DO THE CONCERNS SAY?

Mills under the state-owned producer made around 24,500 tonnes of sugar in the last fiscal year of 2021-22, the lowest in 14 years, just half of 48,000 tonnes they delivered the previous fiscal year and less than a third of 82,000 tonnes in 2019-20. Under such circumstances, experts say that mortgaging six productive sugar mills for modernisation is an immature decision. Mentioning that the modernisation process of sugar mills is very slow in the context of Bangladesh, they said that currently the closed mills are abandoned and the machineries in them are unused. As a result, many productions are disrupted. They said that there is no alternative to take quick action in this matter.

Md Abu Dawood, head of security of Pabna sugar mill, said, “Most of the machinery is breaking down due to lack of operation and maintenance but we don’t have enough manpower to maintain them.” “Trolleys and other machineries are lying abandoned in the open, with wild plants and weeds growing on them,” he added.

In this regard, Pabna sugar mill’s acting managing director Md Akhtaruzzaman said that he has already sent a letter to BSFIC and urged them to use the remaining machineries and vehicles in the operational mills. Akhtaruzzaman said, “About Tk 6 crore is being spent annually on maintenance, wages and other bills. Also, it will take at least a year to repair the mill and restart operations, which will become more expensive as the days go by.

At present, the government is using a public-private partnership and trying to restart the mill’s operations, but it’s still uncertain.” Moreover, sugarcane production in Pabna, one of the largest stalk producers in the country, is also suffering due to the closure of sugar mills. According to Akhtaruzzaman, approximately 6,000 hectares of land were brought under sugarcane cultivation programme to produce some 1 lakh tonnes of the stalk in 2020. After the closure of the mill, this year, sugarcane is being produced on just 40 to 50 hectares of land in the district. “So, it will be difficult to bring farmers back into sugarcane cultivation if the mill resumes operation,” he said.

In this regard, BSFIC chief marketing officer Md Mazhar Ul Haque Khan said that out of 15 mills operated at the government level, the production of six mills has been stopped for two years. Besides, the production of the running mills has decreased. As a result, even in the current crisis, the BSFIC is not able to ensure an adequate supply of sugar.

A WAY OUT FROM THIS TROUBLESOME SITUATION

It is understood that many state owned sugar mills are now closed and some are on the verge of shutting due to long-term neglect, mismanagement and corruption. Their cost of production is also unusually high due to rising costs and dilapidated condition of machinery and equipment. Additionally, most state-owned sugar mills survive on government subsidies. These mills are enjoying high sugar prices now, but the happy days will be short lived. The government should consider modernising these mills with a streamlined management and ensure dynamic supervision. Investment can be a viable option in this case. But the process has not worked well in the country, especially as state-owned enterprises occupy a vast land area.

Private owners, in most cases, violate the agreements signed with the government, either closing factories or using their land for different purposes. In this scenario, the government needs to do a pros-and-cons experiment before deciding on better utilisation of state-owned sugar mills to help reduce dependence on imported sugar. And the most important thing is that the government cannot avoid the responsibility of the sugar being sold in the market at a higher price than the fixed price.

Experts say that the government should increase market monitoring in this case. The Directorate of Consumer Rights Protection (DNCRP) should be more proactive in this regard and conduct more drives in the markets. Moreover, the government must ensure strict punishment of businessmen who are hoarding sugar and creating artificial crisis and increase vigilance so that no unscrupulous traders can hoard sugar.

To end, in a writ hearing on the issue this year, the High Court bench said, “The market of daily commodities has fall under the control of ‘co-ordinated groups’ due to lack of implementation of the law.” The Competition Act was passed in 2012 to regulate the market but so far its implementation is not visible. If the institutions of government- laws, rules, policies, regulatory agencies, supervisory agencies were active, the hoarders would not have dared to manipulate the sugar price. Strict intervention of the government is definitely needed to control the ongoing market situation. Otherwise, the suffering of the common people will not decrease but increase.

Meta threatens to ban news from Facebook in US