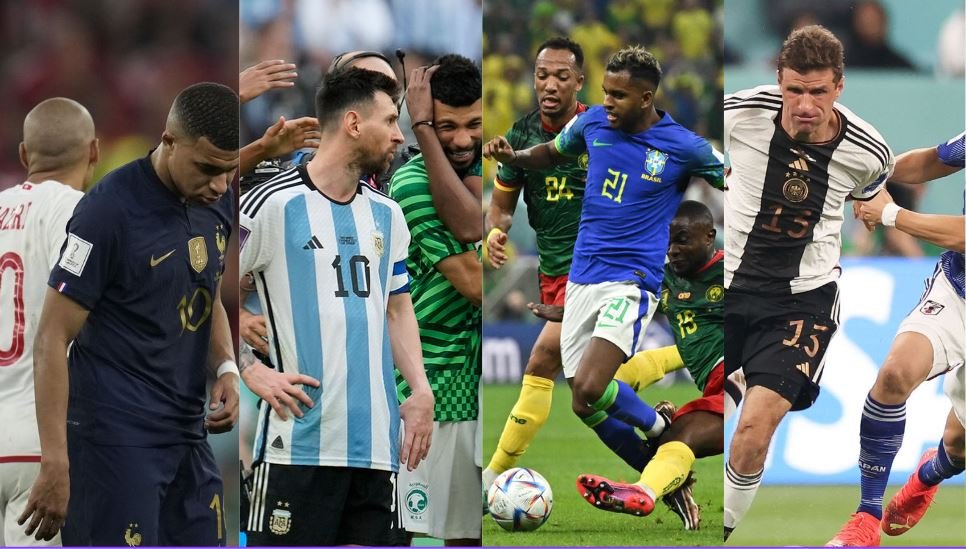 Group stage matches in a FIFA World Cup are usually mundane affairs with some upsets here and there. But in the middle of the desert in Qatar, the affair went proportionately with the Game of Thrones dramas. Kings have been slayed, dragons from the east have risen, unexpected warriors climbed the ladder of chaos, and the audience has been left on a cliffhanger. With the World Cup at half times, many hot favorites have been knocked out even before reaching the knockout stages. Today we venture into the top 5 matches with unexpected results.

With King Leonel Messi at its helm, Argentina came to Qatar as a genuine title contender. The first half of the match went on as per script. Messi opened from the spot after a Saudi defender manhandled Argentine Leandro Parades inside the penalty area. Then inside the first 45 minutes, 3 other goals were scored but ruled out for offside. It seemed that La Albiceleste will slaughter the Saudis as planned.

But after the half times, a different Saudis came out from the dressing rooms. Their coach Hervé Renard gave a scintillating speech, now a viral sensation, to rile up his troops and send them out like a hungry pack of wolves. Saudis relentlessly pressed the Argentines. They scored two beautiful goals courtesy of Saleh Alshehri and Salem Aldawasari. Saudi goalkeeper Mohammed Al-Owais seemed to have grown wings. In the end, King Messi and his men did not have an answer to the Saudis. One of the most memorable upsets in FIFA World Cup history was created in the Lusail Stadium, Qatar.

YOU CAN ALSO READ: FIFA WORLD CUP 2022: EUROPE OR LATIN AMERICA, WHO WILL DOMINATE THIS TIME?

“Football is a simple game. Twenty-two men chase a ball for 90 minutes and at the end, the Germans always win.” – a memorable quote by former English striker Gary Linekar. The Blue Samurais of Japan turned the quote into madman’s blabbering. The match proceeding went almost as same as the Argentina-Saudi Arabia match. The Germans opened the score from an Ilkay Gundogan spot kick.

Almost in a poetic redemption, the Japanese seemed to take over the Die Mannschaft traits of hard industrial football with relentless hard pressing and swift counterattacks. They outplayed the Germans in their own game. Ritsu Doan and Takuma Asano scored two goals in 75 minutes and 83 minutes of the match. The Japanese players defended as a unit and never gave the Germans much chance of getting back into the match. In fact, Germans never got back into the tournament and crashed out unceremoniously from the group stages.

Belgium came to Qatar as one of the strongest and most balanced squads. From the goalkeeper Thibaut Courtois to the striker Romelu Lukaku, the Red Devils have the best performers from the top European leagues in each position. The team has drawn over a billion dollars in transfer markets around Europe. But none of these mattered when they met the Atlas Lionsat Al Thumama Stadium.

Belgians started the match in a lively manner with both Hazard brothers testing the goalkeeper. Belgium kept 63% possession in the entire match. The Moroccans kept their hope in counterattacks with their attacking talents like Hakim Ziyech, Achraf Hakimi, and Zakaria Aboukhlal making constant nuisances for the Belgian defenders. In the 73rd minute of the match, Abdelhamed Sabiri curled in a precision corner in the first bar which got the faintest of touches from Roman Saiss’ hip and beat Courtois. Zakaria Aboukhlal sealed the famous win with a fine finish at added minutes. Belgium also has not made it to the knockout stages of the tournament.

Present World Champion France is also a hot favorite to win the cup in Qatar. They have world-class players with world-class backups in almost every position. France has already won their qualification for the round of 16 when they faced Tunisia in their final group match. France made 9 changes to its starting lineup from their previous match.

Tunisia outplayed France in every department in this match. In the 58th minute of the match, Tunisia captain Wahbi Khazi produced a brilliant moment when he drove to the edge of the box and coolly rolled it into the bottom right corner. France had a ruled out by VAR for offside in the final minute of stoppage-time as Tunisia stopped the world champions at their heels.

The five-time winner of the World Cup, Brazil came to Qatar with its strongest squad since 2006. Same as France, Brazil already won their qualification for the round of 16. On the other hand, Cameroon needed a must-win and a hand of luck to go through the next stage. The omen was also against the Indomitable Lions as no African team has defeated Brazil. The match ended with an incredible header from Vincent Aboubakar in the second minute of injury time.