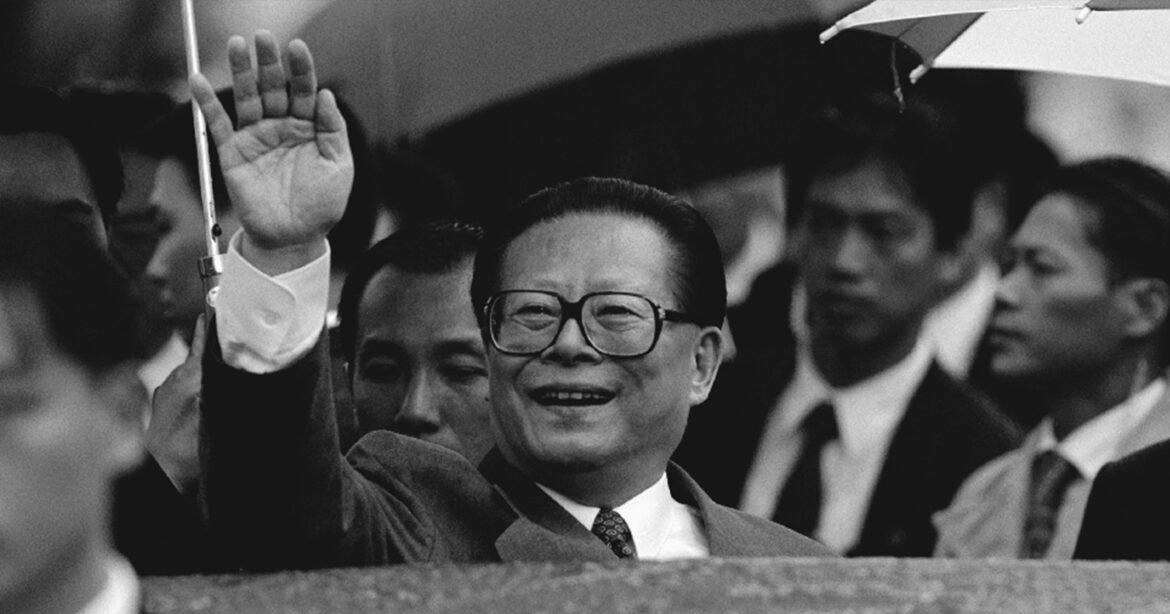 Jiang Zemin, the Chinese communist leader who guided the nation in becoming a global superpower, passed away on Wednesday at the age of 96.

China under Jiang’s leadership experienced a period of expansive opening and rapid progress. A statement from the Chinese Communist Party reports that Jiang died of leukemia and organ failure. Jiang’s death comes at a time when China is witnessing some of its biggest protests since Tiananmen. In the past few days, people all over China have been protesting against the government’s “zero-corruption” policy. Some protesters in Shanghai have called for the current leader, Xi Jinping, to step down. China has a long history of people taking to the streets to mourn the deaths of previous leaders and to complain about the current government. When Jiang’s death was announced, people flooded China’s tightly controlled social media with posts to remember the former leader and a bygone era, when China was more free and open to the rest of the world.

Jiang Zemin is recognized for leading his nation out of an isolation following the suppression of pro-democracy demonstrations in Tiananmen Square. After the 1989 Tiananmen crackdown, Jiang was unexpectedly chosen to lead a divided Communist Party. He presided over the nation’s emergence as a global manufacturer, the restoration of Hong Kong and Macao from Britain and Portugal, and the realization of a long-cherished dream: winning the competition to host the Olympic Games after being rejected previously. He was acknowledged “as an outstanding leader with high prestige” and “a long-tested Communist fighter” to the people of China.

YOU CAN ALSO READ: STUDENT POLITICS or APOLITICISM WHICH ONE SHOULD BE PROMOTED?

A transitional leader at first, Jiang was selected as he was nearing retirement with a mission from then-superior leader Deng Xiaoping to unite the party and the country. But he did prove to be transformative. In his 13 years as general secretary of the Communist Party, the highest office in China, he oversaw China’s ascent to become a major economic force by allowing capitalists to join the party and attracting foreign investment once China joined the World Trade Organization (WTO).

Jiang capped his career with the first orderly succession of the communist era, giving up his position as party head in 2002 to Hu Jintao, who became president the following year. Jiang attempted to maintain his position of power by continuing to serve as the head of the Central Military Commission, which is in charge of the 2.3 million-strong People’s Liberation Army, the party’s military wing. Although he followed a harsh posture on Taiwan, he also set aside political reforms and shut down internal opposition. He received criticism for the harsh persecution of the Falun Gong religious sect in 1999, which was considered a threat to the Communist Party.

A Chinese leader with different ideology

China climbed to the top of the list of international powers during Jiang’s leadership, and the Communists reinforced their hold on power. To assure his own longevity in the Communist Party, Jiang developed his own political ideology, the Three Represents theory, in an effort to modernize the party. During his time in power, Jiang tried to improve relations with the US. He went there several times and offered then-president George W. Bush help in the “war on terror” that the US was fighting after the 9/11 attacks. Although Jiang resigned his last official position in 2004, he persisted to play a significant role in the negotiations that resulted in the emergence of the current President Xi Jinping, who into office in 2012. Xi has remained committed to Jiang’s policy of combining political repression with economic liberalization.

In a nation not known for its flamboyant leaders, he was perceived to have a more colorful personality than his successors. Though Jiang’s colorful personality and cosmopolitan style were sometimes made fun of while he was in power, but in recent years, Chinese social media users have been talking more about how the political and social climate was much more relaxed when he was in charge. In the eyes of many citizens, Jiang was perceived as one of the few Chinese leaders who preferred to lead as an ordinary person, instead of ruling as a communist dictator.