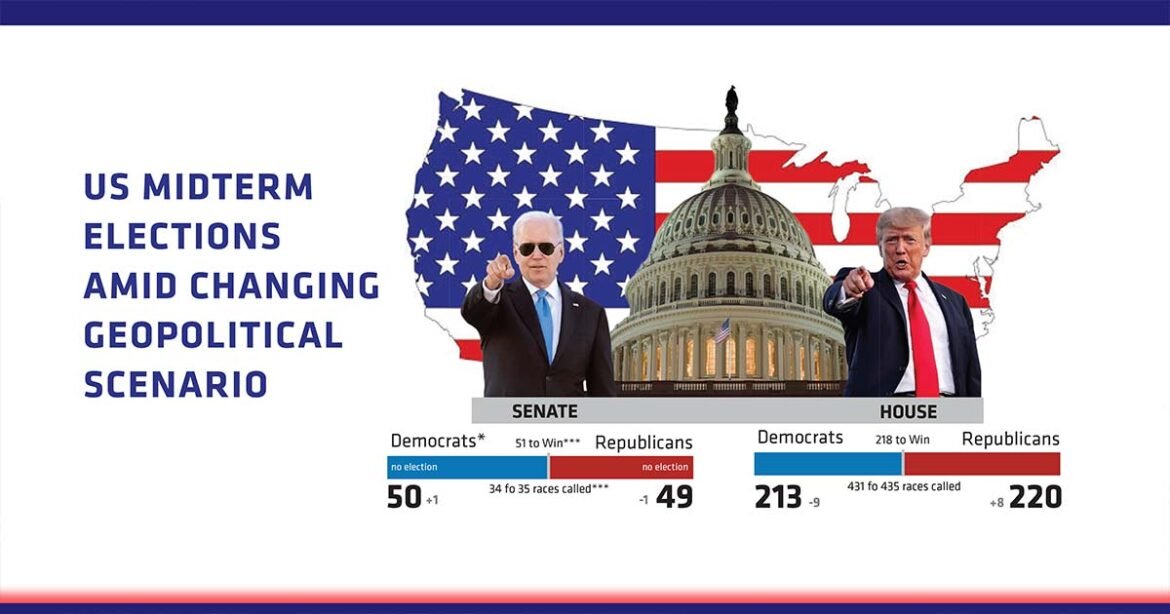 American voters voted in the midterm elections held in early November two years after Joe Biden was elected as the President of the United States (US). As per the US Constitution, elections take place in the middle of the four-year term of US presidents, so it is called midterm election. In this election, the ruling party usually does not do well. In addition, the environment was more hostile for the current US president Joe Biden’s Democratic Party this time. Besides, the results of various pre-election polls were showing that the Republicans will be ahead this time. Republicans indeed were dreaming of a ‘red wave’ in the midterm, but that didn’t happen. According to the results obtained, the Democrats have won the majority in the Senate of the US Congress, while the Republicans have won the majority in the House of Representatives.

YOU CAN ALSO READ: RISE OF THE FAR-RIGHT-IS LIBERAL DEMOCRACY UNDER THREAT?

That is, the Republicans did not get as much support as they had hoped for. However, public support for the Biden administration has also deteriorated noticeably, because Donald Trump‘s Republicans have taken over the lower house of the congress. It is thought that Biden’s policies regarding the ongoing Ukraine-Russia war, high inflation, and economic crisis in the world’s number one economy have fuelled decline in his popularity. The rise of right-wing politics around the world is also considered by many to be behind this result. After the elections, both Biden and Trump announced candidacy for the next presidential run. This election, however, is very important in various other aspects. Because, according to experts, the election results will determine the ensuing foreign policies of the US and even affect the ongoing shifting geopolitical scenario.

HOW DOES THE US MIDTERM ELECTIONS WORK?

General people are represented by 535 lawmakers in the US government, known as members of the congress. The US congress consists of two parts: the Senate and the House of Representatives. Senate is the 100-member upper house of the congress, where senators are elected for six-year terms. One-third of the Senate seats are up for election every two years. Another part is the House of Representatives, famously known as the house, which has 435 members. They are elected for two-year terms. So after two years, elections are held for all the seats in the house. If the president wants to construct any law, he has to get the consent of these congress members. Congressional midterm elections occur halfway through a president’s term, to test his popularity and performance. At this time, about onethird of the 100-seat senate and all 435 seats in the house are voted on. Two senators gets elected in each American state. On the other hand, one representative gets elected from each district of the provinces. Consequently, if the ruling party loses its majority based on total seats in both senate and house, it loses the overall control.

WHY IS THIS MID-TERM ELECTIONS IMPORTANT?

The recent midterm elections in the US are of great significance, as the outcome could bring the country to a halt. President Biden and his Republican predecessor Trump’s political relationship is not good and they are known as fierce rivals. Trump didn’t accept his defeat in last presidential polls, when he also accused Biden of vote rigging. In addition, Trump did not hand over power to President-elect Biden in accordance with the tradition. Even Republican radicals did not hesitate to attack the Capitol to keep Trump in power. Now the question in the public mind is whether the old days are going to come back again? In the preliminary results of the midterm elections held in the US on November 8, the ruling Democrats won 50 seats in the 100-seat Senate, and the opposition Republicans won 49 seats. The result of one seat is still pending. If the Republicans win that seat, the seats of the two parties will be equal.

In such a situation, vice president Kamala Harris can win the Senate for the Democrats with her decisive vote. That means, no matter what, control of the Senate remains in Biden’s hands. However, the picture is different in the House of Representatives. The results of 430 of the 435-seat House have been released. Among them, Trump’s Republicans got 218 seats, and Biden’s Democrats got 212. Even if the ruling Democrats won all the remaining seats, the 218 seats required for a majority in the House of Representatives are already in the hands of the opposition Republicans. In such a situation, if President Biden takes up any proposal in the House of Representatives, the opposition can block it. If the Republicans show dominance here with the strength of the majority, the proposal they passed could be stuck again in the Senate, which is now under the Democrats’ control. Therefore, political analysts think that the upcoming political situation in the US will be rather complicated.

This midterm is surely a battle for dominating the US legislative council, and an indication of which party will be in an advantageous position in the presidential polls held in 2024. Because, a popular idea in the US is that the midterm elections are essentially a blueprint for the next presidential election. The only major change in the election results so far is that the Democrats’ majority in the House is now facing a major challenge. US President Joe Biden has announced his candidacy for presidential election of 2024. Although the midterm elections during his presidency saw Democrats achieve one of their best gains in their history by retaining control of the Senate, questions remain about his age. Biden is now 80, so the question arises as to how many years a man can properly serve as president.

However, while retaining control of the Senate, Democrats lost control of the House, but not by much. So it was somewhat predictable that Biden would participate in the next presidential election. On the other hand, is his rival Trump is too far behind? Although this result has given Biden one of the best victories in Democratic history, but Trump has maintained his popularity in the face of many controversies. Trump’s strict immigration policy is seen as one of the main reasons behind his coming to power last time. As a result, the rise of global nationalist ideology and far-right politics is also reflected in Trump’s success. Although many Republicans blame Trump for not winning control of the Senate, Trump has also announced that he will run for the next presidential election. And it is absolutely true that if Trump becomes a candidate in the next election, there is no room to take him as an underdog, even he can surprise all and become president again.

HOW WILL THE US MIDTERM ELECTIONS SHAPE UP CHANGING GEOPOLITICS?

Following years of rupture, experts have widely agreed that both Democrats and Republicans have reached a surprising bipartisan consensus on at least two of the main foreign policy priorities of Biden’s administration – China, and the Russian invasion of Ukraine. But analysts said Republican rifts over continued financial support for Ukraine could be intensified as they take control of the House. “The support for Ukraine in Congress has been strong and bipartisan,” said analyst Andrew Bennett, adding that the US aid to Ukraine has faced “few political limits from Congress so far. But, after the elections, at best support for Ukraine will stay the same, but more likely it will go down.”

Furthermore, both Democrats and Republicans in the House and Senate have favoured tougher economic policies toward China, so the increased tension in US relations with China over the last several years will likely continue. Tighter constraints on immigration, less support for international environmental negotiations, a more assertive policy toward Iran, and less support in general for NATO could come up, all showing a move back towards Trump administration policies. In addition, congressional attitudes towards Israel and Saudi Arabia can shift back to the traditional, friendlier Republican stance.

In fine, the Republican control of the House of Commons could amplify the voice of former President Donald Trump, who is expected to be the party’s next presidential candidate who pursued an “America First” strategy that shook up US foreign policy during his term in the office. Trump is already back in the media headlines two years after losing the last election and being globally criticised for the storming of the Capitol. But why he is showing the courage to return? The simplest reason is that a section of the American society like him, and his ideology known as Trumpism that includes intimidation, contempt, and intolerance of non-white ‘others’ as three important aspects. In opinion polls conducted in the middle of this year, the probability of his support for the presidency did not rise above 50 percent, but did not also fall below 40 percent. Therefore, far-right politician Donald Trump’s participation in the upcoming US presidential election will be an important message not only for America but also for global politics.

For 100 years since World War I, the world has always been governed by one or more countries. World War II was the time when the leadership of the world order came into the hands of US. For several years, the Soviet Union was able to throw some challenges in that field, but after the collapse of the Soviet Union, the almost absolute dominance of the US in the world system was confirmed. During Trump’s time, the US has voluntarily removed itself from various international organisations and many other areas of the world. Trump withdrew the US from the Paris Climate Agreement, World Health Organization, UNESCO, United Nations Human Rights Organisation, nuclear deal with Iran, and Trans-Pacific Partnership agreement with several Asian countries. He even talked about pulling US out of NATO several times. The vacuum created by that withdrawal has been largely occupied by China and, in some cases, Russia. Therefore, this election is also important for global politics.

RISE OF THE FAR-RIGHT: IS LIBERAL DEMOCRACY UNDER THREAT?