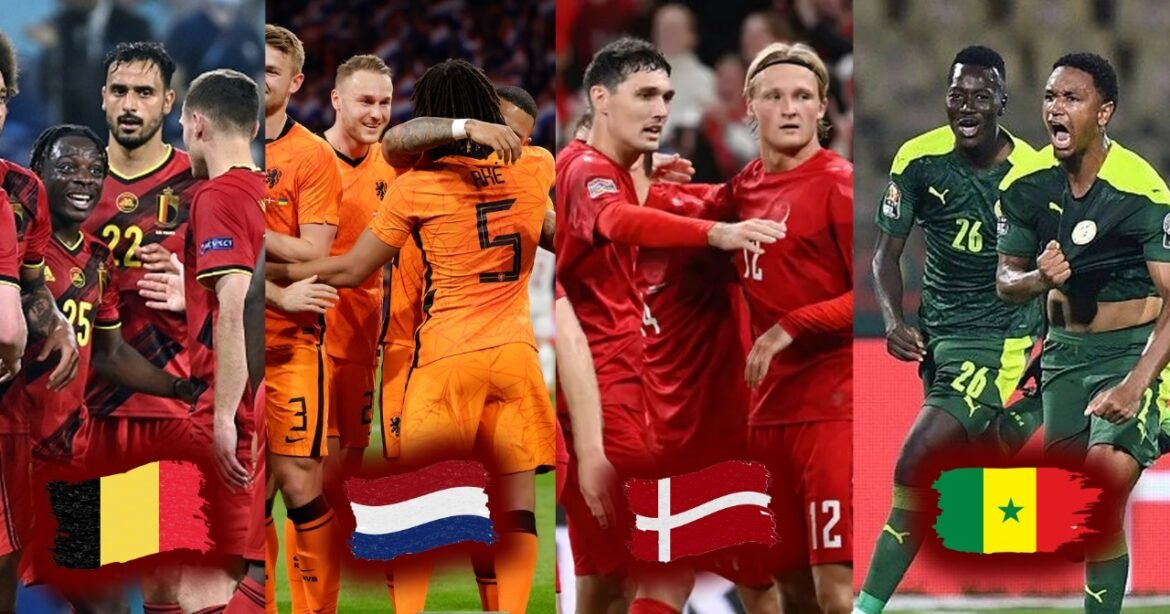 Apart from the hosts, every team had to overcome the tough hurdles of qualifiers to enter the main stage of World Cup. For this reason, all teams participating in the FIFA World Cup are considered as eligible competitors. And, the Greatest Show on Earth combines the passions of every nation in such a way that any team is capable of defeating any other team on their day. And here is the specialty of the football world cup. However, like the previous seasons, the names of Brazil, Argentina, France, England, and Germany, among a host of other countries, are in the running for the title in Qatar World Cup.

But apart from the hot favourites, there are other teams in this World Cup, who can become a threat to any superpower on their day. Football’s governing body FIFA released the last rankings before Qatar World Cup on October 6. Five-time world champions Brazil will head into the World Cup being at the top of the rankings, extending their lead over Belgium, for the first time after 12 years.

You can also read: End of era: Great footballers who’ll grace the occasion one last time

There was no change among the top five nations from the August rankings, with Belgium securing runners-up spot, Argentina being ahead of France and England. All the teams in the top five will compete in the tournament alongside the tournament’s favourites and dark horses. One question surfacing in many minds is, who’re the dark horses this time? In fact, the favourite names are already on everyone’s lips with the excitement of football’s biggest competition building up steadily.

The likes of Brazil and France have massive quality and can be victorious. However, the World Cup has had its fair share of surprises in the past. The greatest show on earth is renowned to have many surprises as the last World Cup in Russia saw Germany being knocked out from the group stage, and the dark horse of that tournament Croatia reaching the final. With the tournament set to start shortly, let’s look at a few countries that might emerge as dark horses in this edition of the FIFA World Cup:

It may not exactly be the last song of the golden generation Belgium is listening to, but day by day the ages of the superstars are not reducing at all. Eden Hazard and Kevin De Bruyne turn 31, Thibaut Courtois running 30. They are more experienced now than ever. Thus, there will be no shortage of people betting on Belgium in the World Cup. There are reliable forwards like Hazard and Lukaku in attack. There are skilled playmakers like De Bruyne to set the tone of the midfield. Dependable Courtois is under the post.

Tactful coach Roberto Martinez will be in the dugout. Belgium has all the ingredients to reach the pinnacle of success. They will surely anchor Qatar this time with the desperate desire to win the elusive trophy of the World Cup.

Denmark were the dark horses in the European Championships last summer. Their impressive display saw them progress to the semi-finals, only to be outdone by a controversial Harry Kane penalty. Denmark can be the dark horses again with similar quality in the squad headed for the World Cup. The Danish side is currently ranked 10th in the FIFA rankings, and rightfully so. The Danes topped their qualifying group, losing only one game. With players like Christian Eriksen, Pierre-Emile Højbjerg, and Andreas Christensen, Denmark can beat any opponent on their day.

The African Champions are ranked 18th in the world rankings. Their famous victory against France in 2002 is regarded as one of the biggest shocks in FIFA World Cup history. This is only Senegal’s third appearance in this competition. With the likes of Édouard Mendy, Senegal could emerge as one of the dark horses this winter although their superstar Sadio Mané’s exclusion on the eve of the World Cup opening has certainly dashed hopes to a huge extent. Last time out, they were knocked out of the group stage on a fair-play basis – thereby allowing Japan to qualify ahead. However, they have the quality to become the first African side to make it past the quarter-finals this time.

The Dutch national team was notably absent in the 2018 edition. Their last appearance, in 2014, was one to remember as they finished third in the competition. They are led by the same man who took them to their last World Cup, Louis Van Gaal. The 71-year-old tactician will be keen on taking his country further this time. The Netherlands have been unbeaten since Van Gaal returned to the squad and have drawn only four games. They topped their Nations League group, beating Belgium home and away.

At the moment, they are ranked eighth in the world. Nonetheless, with the quality of this team in all areas, and players like Virgil Van Dijk, Memphis Depay, and Frenkie De Jong, they have the quality to clinch the title for the first time in the nation’s history.