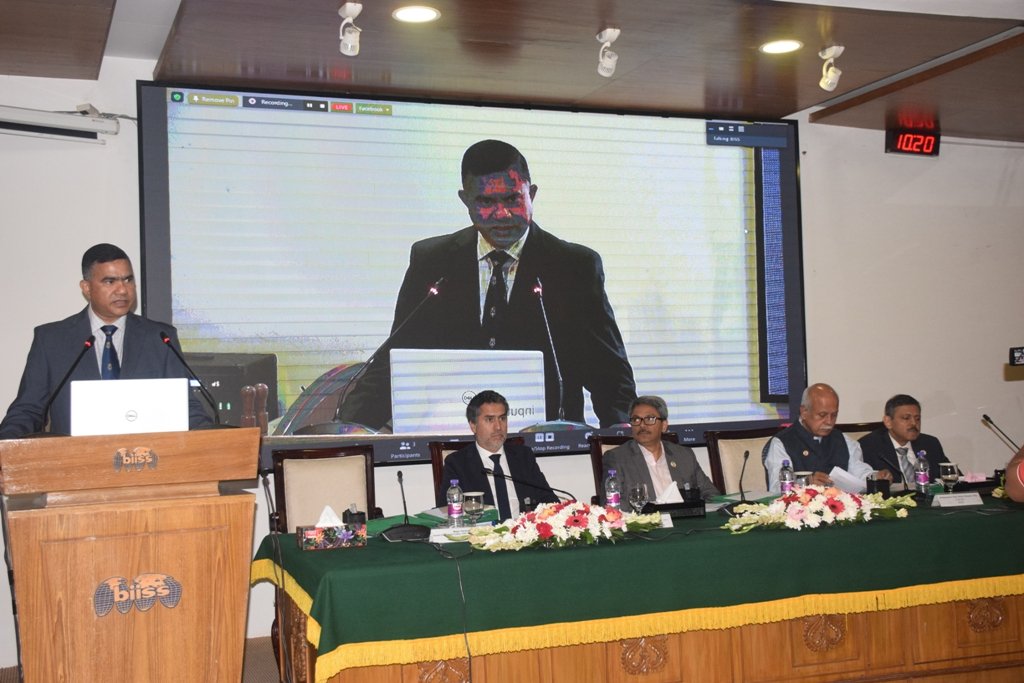 Speakers at a city event have shed light on the historic tie between Bangladesh and Portugal that can be traced back to the 16th century. They highlighted the growing trade relations between these two countries and emphasised advancing the current economic relationship by exploring new avenues.

Bangladesh Institute of International and Strategic Studies (BIISS) hosted the event as part of its Eminent Person Lecture Series (EPLS) on November 18 titled “Bangladesh-Portugal Relations: Quest for Deeper Bilateral Cooperation”. State Minister for Foreign Affairs Md Shahriar Alam MP, was present as the chief guest with Secretary of State for Foreign Affairs and Cooperation of Portugal Dr Francisco André as the special guest.

The Dhaka-Lisbon bilateral tie will mark its 50th anniversary in 2024. BIISS DG Major General Sheikh Pasha Habib Uddin in his opening remarks reminded the audience of the historic ties between the lands, which he said, is five centuries old. In the early 16th century, the Bengal Sultanate permitted establishment of Portuguese settlement in the Chittagong region. The cultural and linguistic bonds between these nations were highlighted with the word “Janala” or window of new opportunities in future relations by the BIISS DG.

Bangladeshi diaspora in Portugal faces certain constraints concerning visas, especially for their family members, in the absence of any Portuguese diplomatic or consular mission in Bangladesh. In his lecture, Dr Francisco André assured that his country, with the golden jubilee celebration ahead, is genuinely contemplating the idea of opening a diplomatic mission or at least a consular office in Dhaka. He highlighted that this is the 3rd high-level bilateral meeting between the countries that shows the continued progress of bilateral ties.

Portugal to back Bangladesh on Rohingya issue

Speakers and guests present at the event voiced their concerns over the Rohingya refugees and asked about Portugal’s involvement in a bilateral capacity and as a prominent member of the European Union. Dr André said, “Portugal also faced a similar situation of refugees from Ukraine. We are hosting over fifty thousand refugees displaced by Russia’s illegal invasion of Ukraine. I have assured the state minister Shahriar Alam in yesterday’s meeting that Portugal will be beside Bangladesh to help in this humanitarian crisis.”

He also said that Portugal will bring the issue of Rohingya repatriation to all global forums including the next Asia-Europe meeting between the EU and ASEAN countries. In his speech, State Minister Shahriar Alam urged Portugal to maintain its voice and support for humanitarian assistance, justice and accountability, and safe and dignified repatriation of the Rohingya.

The state minister thanked Portugal for its forward-leaning approach to climate action, including for its support for the ‘loss and damage’ agenda. The recent cooperation between the two nations was highlighted in the COP-27 summit which is finished today.

‘We look forward to working with Portugal on conserving and protecting our oceans from climate change impacts. We have taken due note of Portugal’s desire to serve the cause of international peace and security as an elected member of the UN Security Council in 2027-28,’ the state minister said.

Answering a question from the audience Dr André emphasized Portugal’s success in investing in green energy like solar, wind and hydro resources have helped the country to face the present energy crisis more than other European countries. He continued that both countries can find ways of cooperation in the green energy sector in terms of sharing technical capabilities, investment, and development.

The growing trade between both countries was discussed at length by all the speakers at the event. In his speech, Dr André acknowledged Bangladesh’s tremendous economic growth over the last decade and congratulated the country’s graduation from the LDC list.

“It is reassuring for us that Portugal is favourably disposed to Bangladesh’s obtaining the GSP+ facility in the EU market beyond 2029. I am certain that Portugal will also play a catalytic role over time in realizing our efforts to take our engagements with the EU towards a more strategic direction,” said the state minister in his speech.

Bangladesh and Portugal’s shared geographical component of vast coastlines have opportunities in developing a sustainable blue economy also. Both parties agreed that cooperation will be beneficial for the advancement of industries such as

The state minister of Bangladesh laid emphasis on continued investment in people-to-people connectivity between the two countries. Dr André also acknowledged that people-to-people contact between both nations needs to increase significantly for a healthier bilateral tie. Both parties agreed that can be achieved by facilitating business, tourism and cultural delegation.

One of the audience members pointed out the importance of diplomacy through sports especially by involving football superstars such as Cristiano Ronaldo. Dr André replied that Sports are a great way to achieve people-to-people contact and facilitate peace. Football is the crown jewel of Portugal’s sporting success and Portugal will try to explore such a possibility.