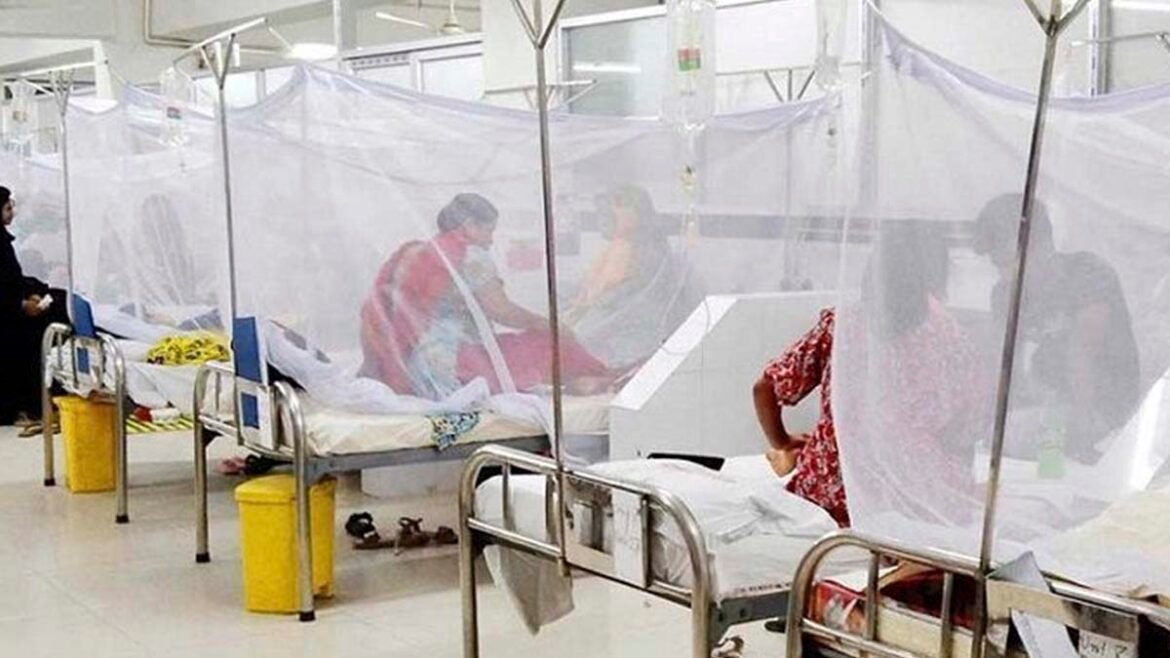 The number of dengue patients hospitalized in Bangladesh has surpassed 50,000 mark recently with new patients getting admitted to hospitals and health centers on a regularity. A press release from the Directorate General of Health Services has shared the above data. As of November 18, a total of 2,729 patients were getting treatment at hospitals across the country. With less than one and a half months left in the year, the annual death toll from the mosquito-borne disease has already reached an all-time high.

You can also read: Is Bangladesh Fragile in Climate Change Management?

Dengue fever is transmitted by mosquitoes in tropical and subtropical regions of the world. It causes severe flu-like symptoms and sometimes a complication that could be fatal. Over the previous 50 years, dengue incidence has grown 30 times worldwide. When in 2019 there were more than 100,000 reported cases of the dengue virus in the country, and the death toll was 179, but this year 220 people already died as of November 18 from dengue even though cases remain around half compared to 3 years ago. And this has brought to the fore a commonly-asked question in public minds: Why has dengue turned deadlier this time?

Symptoms of dengue include high body temperatures (104 °F or more), excruciating joint and muscle pain, pain behind the eyes, nausea and/or vomiting, excruciating headaches, etc. There are no effective dengue vaccines, and all vaccines are still in development. This poses a severe threat to humans and the treatment of dengue patients. Dengue is treated more by relieving the symptoms than by giving strong drugs. Why are dengue cases spreading fast? Unplanned urbanization and a climate favorable to the expansion of Aedes mosquitoes act as catalysts for increased dengue. Considering temperature and rainfall, every district in Bangladesh is favorable to the spread of dengue mosquitoes.

Over the past 10 years, rapid unplanned urbanization (and the ensuing waterlogging) has further contributed to this. Director of DGHS’s Disease Control Department Nazmul Islam said that climate change has made dengue more common. Additionally, the prevalence of mosquito-borne illness has risen this season as a result of a lack of awareness. Health Minister Zahid Maleque said, “Creating awareness among people is a must to rein in the dengue menace. We’ve taken various steps in this regard.” He claimed that municipalities and local corporations were advised to take extra precautions to kill mosquitoes.

According to Professor Kabirul Bashar of the Zoology department at Jahangirnagar University, 40% of mosquito breeding occurs in unfinished buildings, which are also the main breeding sites for Aedes mosquitoes. “In order to be protected from dengue, people should be more aware to go with the effective campaigns of city corporations”, he added.

A change in overall pattern with growing threats

The trend of the dengue outbreaks this year looks rather uncommon. In October, over 50 percent of total cases were reported. Whereas in the past years, dengue cases decreased around this time. In 2019, just 8% of all dengue cases were documented in October, and 19% in 2021. These findings suggest that a changing climate is altering the seasonality of dengue. Even a new study reveals that climate change may allow dengue to bite Bangladesh round-the-year. The extreme genetic diversity of the dengue virus has contributed significantly to the intensity of recent outbreaks.

There are four different varieties of dengue virus. Studies have shown that as virus types vary, dengue complications rise. If one gets infected for the first time, the body will make antibodies that protect it from getting infected again with the same type. But if that person gets infected with other types afterwards, it can be harder to treat. Additionally, the problem will only get worse as s/he gets more infections. Another important issue is the fact that about 75% of persons who contract dengue for the first time show no symptoms. Studies have shown that the clinical spectrum is altering as well.

The gastrointestinal symptoms (such as nausea, vomiting, stomach pain, diarrhea, and constipation) are on the rise, and joint pain and bleeding symptoms are on the decline. Disturbingly, recent epidemics have seen an up to 10-fold rise in dengue shock syndrome (DSS). Recent clinical data shows that dengue is likely going through an epidemiological change in Bangladesh. It is being more of a severe disease, where it mostly affects young adults.

How to prevent Dengue?

As there is no treatment or vaccine, preventing dengue fever is safer than treating it. Here are a few ways of preventing Dengue:

Mosquitoes that spread vector-borne diseases are the most active between dawn and dusk. Keeping all of house windows and doors closed during this time will help keep the mosquitos away.

Sleeping with a mosquito net:

Sleeping with a mosquito net offers an extra layer of defense against mosquito bites.

Mosquito breeding occurs in stagnant water that hasn’t been drained. Emptying flower pots, cleaning and changing pet’s water bowls, and not keeping any water plants in dengue season will help. Also, keeping septic tank and water pipes in good condition, and any container or drum covered will stop the mosquito breeding.

Mosquitoes love shady, wet spots to lay their eggs. Making sure of sufficient light in the room or house will keep mosquitos away from coming in.

Long-sleeved clothing, full pants, socks, and covered shoes are good choices to avoid mosquito bites. It is best to wear this type of protective clothes, especially in locations where dengue is prevalent. Additionally, healthcare support systems at the district level must be built to prevent public health disasters. Critical dengue patients need to be treated in medical centers, and often the ICU is needed. Hospitals at districts lack the resources to handle such severe dengue cases.

In fine, there is little connection between high mosquito populations and severe outbreaks although dengue is spread through mosquito bites. The type of virus circulating in the environment affects disease severity and significant outbreaks. To monitor the changes in the dengue virus throughout the year, a molecular warning system is necessary. The government has provided guidelines to the city corporation and municipalities, but the citizens also need to come forward to share the responsibility as well.

WHY IS STROKE RISING AMONG YOUNG ADULTS IN...