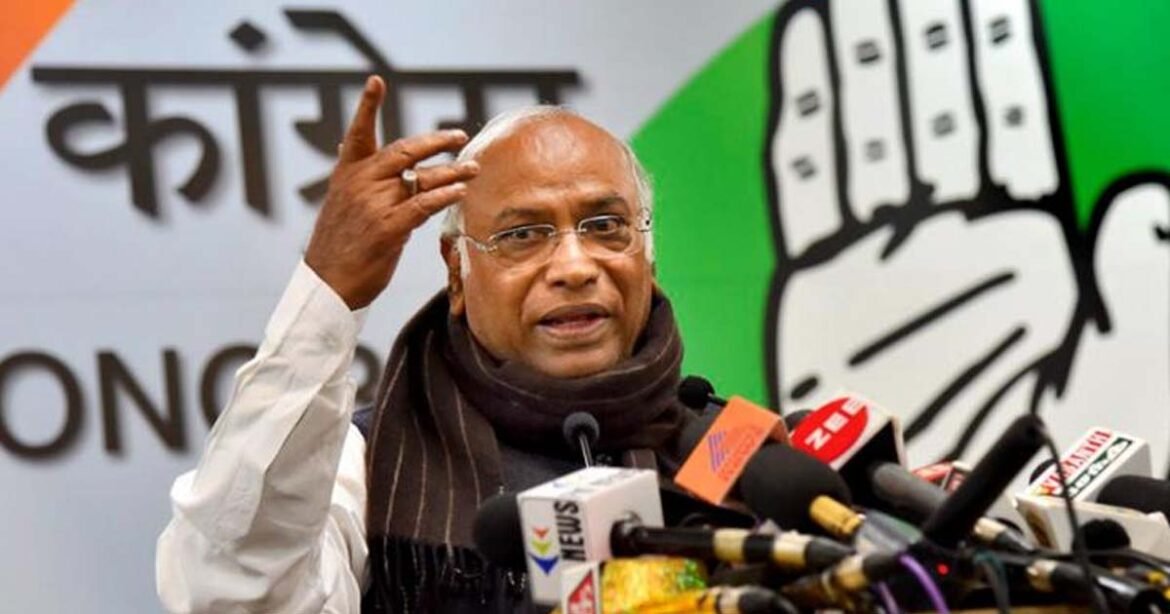 The Congress Party of India has chosen Mallikarjun Kharge as the country’s first non-Gandhi president in decades. The party on October 17 held its first contested presidential election in over two decades – generating interest from political parties and general public alike. The result from ballots have revealed Mallikarjun Kharge as the new president of All India Congress Committee (AICC) with 7897 votes out of 9385.

Since Sonia Gandhi took over in 1998, no one from outside the family has been in command of the nation’s oldest political organisation, which was founded in 1885. Her son, Rahul Gandhi, quit as President after Congress lost badly in the 2019 general election. This left the party without an official leader although Sonia was acting as president and Rahul had stayed in charge in a pragmatic sense.

On October 17, the Congress members cast ballots to select the AICC President, who would succeed Sonia Gandhi as acting President. In addition to more than 65 polling locations across the nation, voting took place at the AICC headquarters. It began at ten in the morning and ended at four. The 37th president of the party was chosen in a secret vote by more than 9,000 Pradesh Congress Committee (PCC) delegates from the electoral system.

During their active campaigns, Tharoor and Kharge met delegates to the Congress while traveling through several states. The strategies of the rivals themselves are also a study in contrasts. Kharge had promised to follow in the footsteps of the Congress’s “Chintan Shivir” promises, which were made at a three-day event in Rajasthan earlier this year. Tharoor, on the other hand, had promised to decentralize the party and make it more open and modern. Tharoor released a 10-point plan for “reviving and re-energizing the party by giving workers more power, decentralizing authority, and staying in touch with the people.”

Kharge was seen as the clear favorite because he was close to the Gandhis and had the support of senior leaders. Tharoor, on the other hand, ran as the candidate of change. At a press conference, Tharoor had expressed his confidence that his strategy “would make Congress politically fit to take on Prime Minister Narendra Modi and his BJP in the 2024 general election.”

Rakesh Sharma, a Congress leader from Bareilly Uttar Pradesh said, “Tharoor’s global experience as a [United Nations] official and excellent oratorical skills qualify him as a leader who can connect with the Indian middle class, a constituency the Congress is fighting to win over from the BJP.” “Kharge’s choice also shows the Congress in a poor light because the BJP’s policy is to retire leaders at 75 and promote younger, energetic leaders,” he added.

As the Indian National Congress party’s leader in the 16th Lok Sabha, Mallikarjun Kharge was a prominent politician from Karnataka. He was elected as a Congressman from Karnataka’s Gulbarga. In the Indian government, he also served as the former Minister of Railways. He is regarded as a capable leader who maintains a respectable public image and is knowledgeable about the workings of politics, law, and government. He has won elections an unprecedented 10 times straight after taking the last general elections in Gulbarga and winning the assembly elections a historic 9 times straight. He represents the scheduled caste in Karnataka. He served as an MLA for 40 years and an MP for five.

Early career: He was appointed the MSK Mills Employees’ Union’s legal counsel in 1969. He was also a powerful labor union leader for Samyukta Majdoor Sangha and organized numerous agitations to support laborers’ rights. He joined the Indian National Congress the same year and rose to the position of president of the Gulbarga City Congress Committee.

The leader of the Congress, Sachin Pilot, stated on Monday that the party has set a benchmark for the nation by holding open, democratic, and transparent elections. “The party proved that there is always free and fair election for the position of party president. Congress party has set an example for the country by conducting open, democratic and transparent elections,” Pilot added.

Reports say that on Tuesday, ballot boxes from 68 polling places set up all over the country were carried to the national capital, where the results of the Congress president election were announced today. They were held in the party headquarters’ “strong room.” Reports citing sources said that the ballot boxes were opened in front of Shashi Tharoor’s and Mallikarjun Kharge’s representatives.

The Gandhi family stayed out of this process, and both candidates for president said again and again that neither Sonia, Rahul Gandhi, or Priyanka Gandhi Vadra support them. Additionally, Tharoor had repeatedly reaffirmed his position that, regardless of the outcome, he and Kharge appreciate one another and would continue to cooperate for the benefit of their party.

Chairman of the Central Election Authority for Congress, Madhusudan Mistry, expressed his satisfaction with the process used to elect the party president. He claimed that the elections were fair, transparent, and free. He added that the voting process ran smoothly and none of the polling places put up across the country had received any complaints.

A hope of change in party fate

Since the BJP came to power in 2014, most people agree that Congress has lost its shine, even if they disagree about who is the best person to bring it back. Congress has battled not just in national politics, but also at the state level. In 2012, it ran 12 of India’s 28 states, while the BJP only ran five. In 2022, the Congress is in charge of Rajasthan and Chhattisgarh, while the BJP is in charge of 16 states. Moreover, congress only has 53 seats in the Lok Sabha or the lower house, compared to the BJP’s 303.

Congress is hoping that a change in leadership will assist it in liberating Prime Minister Narendra Modi’s dominant Bharatiya Janata Party. While this was going on, the BJP promoted the idea that the Congress elections were only “eyewash” or a means of choosing a leader who would be “remotely controlled” by the Gandhis. The campaign hasn’t done much to change these ideas.

The Gandhis, including Sonia (age 75), Priyanka (age 50), and Rahul (age 52), have declared their “neutrality” in the election by not endorsing any candidate.

In 1950, Purshottam Das Tandon and Acharya Kripalani ran against each other for the top job in the Congress. This was the first election for party president since India got its independence. Surprisingly, Tandon, who was viewed as a supporter of Sardar Vallabhbhai Patel, had triumphed over the pick of the then-PM Jawaharlal Nehru.

Twenty years later, in 1997, the next election for president was held, and Sitaram Kesri, Sharad Pawar, and Rajesh Pilot all ran against each other. All state Congress units had supported Kesri, with the exception of Maharashtra and parts of Uttar Pradesh. He won by a huge margin, with 6,224 votes from delegates to Pawar’s 882 and Pilot’s 354.

In 2000, Jitendra Prasada faced off against Sonia Gandhi. This was the only election in which a Gandhi family member was challenged. Sonia Gandhi, who received more than 7,400 votes, handily defeated Prasada, who received only 94 votes, according to reports.

The latest election is certainly historic as the new president, Mallikarjun Kharge, will be replacing Sonia Gandhi, the longest-serving party president who has been at the helm since 1998, barring the two years between 2017 and 2019 when Rahul Gandhi took over. Only time will tell how far or whether the fate of Congress gets changes in India’s political sphere under the new leader’s stewardship.

Food for everyone stressed as PM wants end to war, food politics