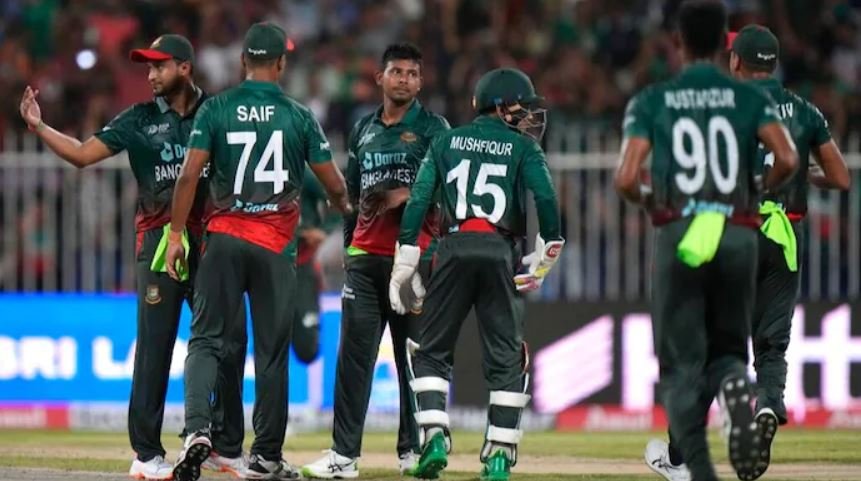 As World Cup minnows Namibia thumped Asia Cup champions Sri Lanka by 55 runs in the tournament opener, supporters of Bangladesh took time to shed some light on their team’s potential this time in the shorter version of the popular game. Bangladesh ended its preparation for the T20 World Cup by losing all four matches in the tri-series with Pakistan and hosts New Zealand. Tigers’ dismal performance in the T20 format continued with sporadic personal performances only positives.

Tigers went into an overhaul of team management and players ahead of the T20 world cup. Senior cricketers like Mushfiqur Rahim and Mahmadullah Riyad were in a way sent into forced retirement. A ‘Technical Consultant’ was appointed specifically for the format who eventually assumed the role as the de facto new Head Coach. Still after having done all these, the team is yet to click as a unit.

Bangladesh’s experimentation with team combination remained omnipresent since the Asia Cup. As the new Technical Consultant of the team, Sridharan Sriram emphasised on the importance of ‘impact’ performances from his players. The noteworthy point is that the team, barring some individual sparkle, has failed to perform as a unit in all three formats of the game.

As for impactful personal performances throughout the series, two fifties from Shakib, one from Liton, and blistering innings from Yasir Ali can be noted despite bizarre team performance. In fact, failure to convert this impactful performance into a positive team result is what remains worryingly missing.

The musical chair of the opening partnership. Lower middle order

The opening pair are the most important players in the batting lineup in any form of the game. But it is even truer for the T20 format with just 36 balls of restricted fielding. After Tamim Iqbal abruptly quit the format, no one has yet to secure the opening position. It seems to have become a timeless problem for which more questions are being raised than answered.

ICC has published a ranking of the opening pairs among the 16 World T20 participants on its website. Bangladesh ranks 15 in the list with only associate nation Namibia behind them. In 2022, Bangladesh tried 11 different combinations for the opening pair. The highest partnership score for the openers was 37 runs from 27 deliveries (Liton Das 30 off 19 and Munim Shahriar 7 off 8).

Liton has been quite successful at the number three position where he has averaged 31.4 runs with 140.2 striker rate and 33.9% of dot balls over 5 innings. Moving him to the top can be just one solution for one of the opening positions. But statistics suggest all other six players on the list are out of form or just do not possess the skill-set to be competitive enough at the international stage.

Nurul Hasan, Mosaddek Hossain, Yasir Ali, and Mohammad Saifuddin form the new look lower-middle order of the line-up. Even Shakib Al Hasan has tried his luck at number 7 most recently. And when Mohammad Saifuddin is picked, Bangladesh bat very deep. It was seen that each player has the capability to go for big shots swiftly. But what’s lacking is consistency from these players.

The constant changing of the line-up is not helping the lower-middle order either. Players with the ability to hit on the go need specific roles each with match conditions considered. The Tigers’ tail-enders are very weak as well. Exposing them before the last couple of overs is all the more a huge risk.

Lack of diversity in the bowling

As a bowling side, Bangladesh has produced very uneven performances in recent times. The T20 format needs varied skills among a team’s bowling unit. While the increase of seam bowlers is a nod in the right direction, the lack of variation among the bowling styles is taking its toll.

In an era where wrist spinners are dominating, we are still overtly reliable on our finger spinners. It is a statement of failure at every level that into 22 years of top-level cricket BCB has failed to produce one international standard wrist spinner.

The only X-factor bowler of the team Mustafizur Rahman has also been going through a long spell of bad patch. Once considered the hottest commodity in franchise cricket around the world, it seems either The Fizz has been decoded or simply he has lost his rhythm. The loss of form from Bangladesh’s most experienced seam bowler is a big headache too.

Hosts Australia’s condition suits better for seam bowlers. The fact is Bangladesh’s seam bowling unit has made a stride in the last few years compared to the meekly medium pacers of the last two decades. There is some genuine skillful young talent in Taskin Ahmed, Shoriful Islam, and Ebadot Hossain. But their exposure to different conditions in the T20 format has been very limited. Surprisingly, Bangladesh’s first match in the T20 World Cup will be their first-ever T20 international in Australia.

Who will be in the playing XI?

The BCB has announced the final team for the World Cup T20 on 14th October. Soumya Sarker and Shoriful Islam have replaced Sabbir Rahman and Mohammad Saifuddin. There is almost no opposing view on the exclusion of Sabbir Rahman after his dismal return to international cricket. But replacing him with Soumya Sarker, who only scored 23 and 4 runs in two innings, shows the pipeline is dry.

On the other hand, the axing of Mohammad Saifuddin from the team means that the team lost a seam-bowling all-rounder. If Mehidy Hasan Miraz is not selected in the playing XI, then that will leave Shakib the only all-rounder in the team. Mosaddek, Afif, and Soumya can swing arms as a part-timer. With no Saifuddin in lower order means Bangladesh’s tail will be a long one too.

Bangladesh perform top-notch in the ODI format. The Test team has had some noteworthy sporadic performances too. But T20 has been a relentless disappointment.

Bangladesh will start their campaign on 24th October against a qualifying team. They will play two warm-up games against Afghanistan (October 17) and South Africa (October 19) in the meantime.